Duterte drug war has killed 2 per day, says UP study 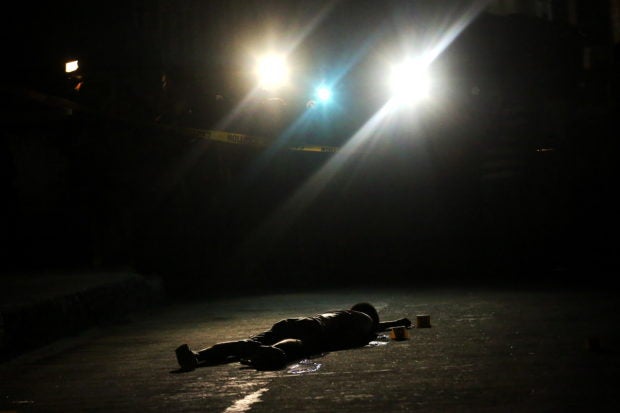 MEASURING VIOLENCE The study aims to make an empirical assessment of state violence particularly under the war on drugs, and to provide Filipinos with a working toolkit for measuring violence in their respective communities. —INQUIRER PHOTO

President Duterte will leave behind an “endless, failed” war on drugs in which, up to his last year in office, at least two people are killed in a day despite his administration’s claims that it is “winning” the campaign, according to an independent monitoring group that is tallying the drug-related killings.

And the numbers show that 2021 is shaping up to be one of the bloodiest years since Mr. Duterte began his drug campaign in 2016, when he assumed the presidency, said researchers Joel Ariate and Nixcharl Noriega of the University of the Philippines (UP)-Third World Studies Center.

Ariate and Noriega are part of a four-member team managing an independent tally of drug-related deaths as part of the “Violence, Democracy and Human Rights in the Philippines” collaborative project of UP, Ghent University and the University of Antwerp.

The team aims, among others, to make an empirical assessment of state violence particularly under the war on drugs, and to provide Filipinos with a working toolkit for measuring violence in their respective communities.

Using media reports from the Inquirer, ABS-CBN and province-based radio and newspapers, the team logged 3,859 deaths from July 2016 to June 2021—or about half the 7,000 killings acknowledged by the government.

But more than the tally, the team aims to unravel emerging trends surrounding the war on drugs, “so there can be a contestation in the framing in the official count, because the numbers are not neutral,” Ariate said.

“We want to show how the different actors contest each other on how to define a drug-related killing,” he said in an interview.

“The police have arbitrary ways of determining drug war deaths, which could obscure the real count,” Ariate pointed out. “It’s important to have a debate about this and make public these data so not all deaths can be simplified into ‘nanlaban’ (resisting arrest).”

As such, the “Dahas” database—“dahas” is the Filipino word for violence—uses at least 27 criteria to assess each death: information on the victim (age, gender, occupation), incident (time, date, location) and assailants (state agent, nonstate agent, unknown), said Noriega.

“We don’t just want to count the deaths,” Noriega said. “We want to get demographic data, because these are not usually disclosed by police.”

The broadest trend from the figures is that the killings remained “persistent” across the years, despite growing condemnation of the campaign here and abroad.

These “intensifying” killings can likely be traced to the leadership of the Philippine National Police at the time, Ariate mused. In those years, the PNP was headed by Ronald dela Rosa, Oscar Albayalde and Debold Sinas, who are well-known for their heavy-handed approach to the drug war.

Noriega said the Philippines’ “highly militaristic” response to the COVID-19 pandemic also likely contributed to the high number of deaths in 2021.

In any case, he said, “we have consistently noted that even if it’s supposedly more ‘difficult’ to [stage operations], there was never a day that there were no drug killings.”

“It’s so persistent that even if there are typhoons, there are still deaths,” he said.

The trends this year are also politically significant as the country transitions into the 2022 elections.

“The political capital of this administration is almost exhausted,” Ariate said. “With so many [political] actors at this stage, there is a possibility that more violence will happen.”

It has also become clear that the war on drugs consistently targeted small-time pushers (53 percent of all deaths), failing in its promise to bring to justice its so-called high-value targets (7 percent).

Another striking point in the database is that, of the 2,548 who were under investigation before their deaths, 2,481 were killed by state agents.

Meanwhile, 40 percent of 682 people who were on a drug watchlist or wanted list were killed by nonstate agents, like vigilantes. The same trend goes for those who were previously arrested or who surrendered for drug-related charges.

Metro Manila and the provinces of Bulacan, Rizal, Cavite and Laguna were consistent killing hot spots across the years.

Since 2020, police operations also appeared to intensify in West Mindanao, with the provinces of Davao del Sur and South Cotabato joining the top 10 hot spots.

The team took particular interest in Nueva Ecija, where drug deaths also surged in 2020 and 2021.

This year, the province has recorded 63 deaths, ranking third after Metro Manila (96) and Bulacan (65). It also recorded the highest number of deaths per week in the month of June.

“That was happening with almost zero attention,” Noriega noted. “So we kept sounding the alarm for people to be vigilant there.”

The Dahas project is slated to end in August 2022. But the team hopes to broaden its scope and original design so it can build an archive for future scholars wishing to look into state violence.

Initially, too, the team planned to publish a book, using the same criteria and methodologies, from which Filipinos can learn to tally and monitor incidences of state violence in their communities. For now, Ariate said, interested parties may access the toolkit at dahas.upd.edu.ph.

Overall, the numbers paint a “logic-less” legacy: a five-year campaign where the goalposts are constantly shifting and the body count never stops.

“At the start of his administration, Duterte said there were 1.2 million Filipinos who were drug addicts, and now he claims it’s 4 million. Unfortunately, it’s like the ‘last [drug user]’ in his term is adjustable,” Ariate said, adding:

“It’s an endless war [that] has turned into a propaganda tool to showcase how brutal the government can be. The campaign claims to be a tool for discipline but it never really managed to take down particular actors in the drug trade.”

For as long as the government disdains holistic approaches to the drug problem—like targeting drug production and international smuggling, and psychosocial support for its victims—the war on drugs will meet the “same tragic end” as those waged in the United States and Mexico, Ariate said.

“There has never been a successful drug war throughout history, and that has to be said again and again,” he said. “As long as we don’t change our approach and as long as we record two deaths a day, this campaign will continue to be a failure.” INQ