Lacson-Sotto tandem wary of foreign meddling in next polls 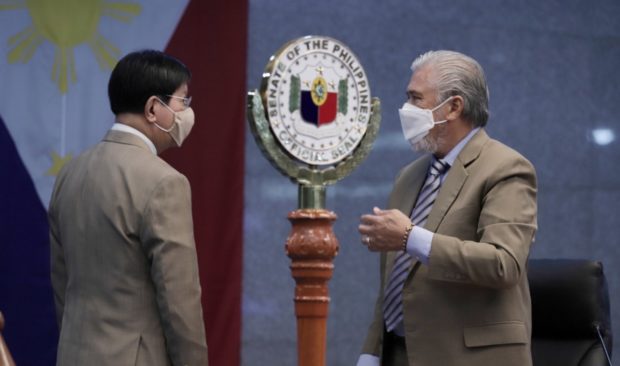 Senate President Vicente Sotto III on Thursday said that the party alliances supporting his tandem with Sen. Panfilo Lacson were crafting countermeasures to stop possible meddling by another country in the 2022 elections and influence its results.

But Sotto clarified that he and Lacson were trusting the capability of the Commission on Elections (Comelec) and the Department of Information and Communications Technology (DICT) to prevent foreign intervention and maintain the integrity of next year’s automated elections.

Sotto agreed that the issue about foreign interference in the country’s elections had cropped up as political parties begin preparations for the political exercise.

“Previously, DICT did not have a part in elections, but now that (Information Secretary Gregorio) Honasan is the chair of the [election] automation, he is assuring us that the DICT will be on top of whatever automation, so we have to rely on that,” he said.

A former senator, Honasan is among the 10 candidates that the Lacson-Sotto ticket intends to field for its senatorial slate.

Sen. Risa Hontiveros called for an investigation into reports of China’s alleged capability to influence the outcome of Philippine elections through its supposed cyberespionage network.

“There had been earlier reports that [Beijing] had already influenced earlier elections, not just here in the Philippines, but even in other countries over which it has economic interests,” she said.

She cited the report by cybersecurity firm Kaspersky of a “rare, wide-scale” advanced persistent threat (APT) driven by Chinese “actors” against internet users in Southeast Asia, including the Philippines.

The report claimed that Kaspersky’s cybersecurity experts had identified 100 victims in Myanmar and 1,400 in the Philippines, including government entities, that supposedly fell prey to “spear-phishing emails” carrying malicious Word documents.

“This cluster of activity—dubbed LuminousMoth—has been conducting cyberespionage attacks against government entities since at least October 2020. While initially focusing their attention on Myanmar, the attackers have since shifted their focus to the Philippines,” Kaspersky said.

“What do you mean China helped me? Who told you that? Help from another country for the 16 million? Sixteen million plus voted, 6 million of that was my majority over your friend,” he said, addressing Del Rosario.

According to Hontiveros, a Senate investigation should find out, through the Department of National Defense and the DICT, if there was reason to believe that China intends to influence the elections.

“And in fact, the latest Kaspersky report is saying that these Chinese cyberespionage campaigns are aimed at particular countries in Asia and Africa, and it is no surprise that in those continents and countries, China either has a large economic agenda, or there are those that they have already captured,” she said.

Aside from the threat of cyberespionage, the Senate will also counter the proliferation of online trolls and their use as a propaganda tool in the coming elections, Sotto said.

He added that he would refer the resolution calling for a Senate investigation of the alleged troll operations, and invite executives of social networking site Facebook, as well as officials of the Presidential Communications Operations Office, the DICT, the Department of Justice and the cybercrime division of the Philippine National Police.

In the meantime, Sotto said they were relying on the actions that Facebook and other social networking platforms had vowed to take against suspected troll operatives. INQ