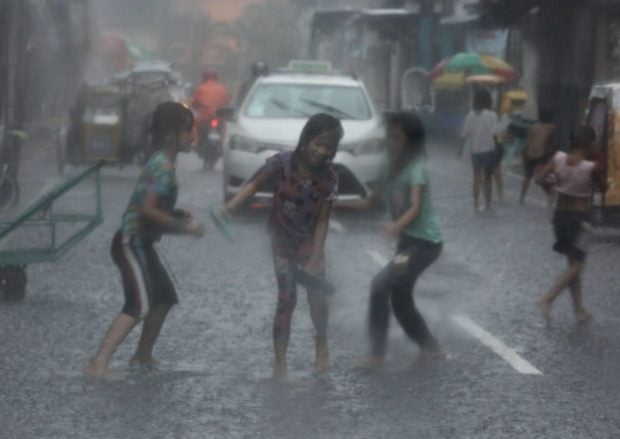 FREE OF COVID CARES, BRIEFLY Children in Paco, Manila, frolic in the rain induced by Typhoon “Fabian” and the southwest monsoon, unmindful of government plans to restrict them again inside their homes to prevent the spread of the more dangerous Delta variant of COVID-19. —RICHARD A. REYES

On the contrary, Maynilad Water Services Inc. on Thursday notified its customers to brace for supply interruptions because of too much rainfall.

It said heavy rains might make raw water at the Ipo Dam too muddy, which would hamper its processing at the treatment plants.

Maynilad advised customers to store water that they could use in case of emergency service interruptions.

“Strong rains usually cause increased turbidity in the raw water coming from Ipo Dam [in Bulacan], which might constrain us to reduce water production in our treatment plants to ensure the quality of water that you will get,” the company said in a notice to customers.

Heavy rains brought by typhoons and the southwest monsoon (“habagat”) cause water that flow into the dams to turn murky.

In November last year, turbidity levels or the clarity of the water coming from the Ipo Dam deteriorated when Typhoon “Ulysses” (international name: Vamco) swept across Luzon, causing massive flooding. A high turbidity indicates excessive concentration of particles such as sediment or soil washing from the banks of the Angat and Ipo Rivers.

This also happened in August 2018, when certain cities in Metro Manila and Bulacan province were inundated by the southwest monsoon.

Maynilad had to reduce water production due to a significant increase in sediment concentration in the raw water coming from Ipo Dam, located about 7.5 kilometers downstream of the Angat Dam in Norzagaray, Bulacan.

When there is discoloration in the water supply, Maynilad also advised customers to let water flow from faucets for a few seconds until it cleared.

Aside from this, the concessionaire serving the West Zone has been implementing scheduled service interruptions in parts of the cities of Quezon, Las Piñas, Parañaque, Muntinlupa, Bacoor and Imus as well as the towns of Kawit and Noveleta in Cavite.

One persistent cause was the high demand for water from the Bagbag reservoir. Earlier this week, Maynilad also conducted repairs at the Pagcor Pumping Station in Pasay City.

At the East Zone, some customers of Manila Water Co. Inc. had to go through overnight supply interruptions due to maintenance works. This week, the affected areas were parts of the cities of Quezon, Pasig and Taguig.

The heavy rains were being caused by Typhoon “Fabian”(international name: In-fa) and the southwest monsoon.

Meanwhile, Batanes province and the Babuyan Islands were placed under Tropical Cyclone Wind Signal No. 1 also on Thursday as the storm brought strong gusts and rain over the area, the weather bureau said.

The Philippine Atmospheric, Geophysical and Astronomical Services Administration (Pagasa) cautioned residents against possible flash floods or landslides due to moderate to heavy rains as well as damage to structures due to strong winds.

As of 4 p.m. on Thursday, Fabian moved slowly over the Philippine Sea, heading west. Its eye was estimated at 505 kilometers northeast of Itbayat, Batanes province.

The typhoon blew winds of up to 150 km an hour near the center and gusts of up to 185 km per hour.

While Fabian is unlikely to bring heavy rainfall in the country due to its distance from the Philippine landmass, its impact on the southwest monsoon will bring more rains across Luzon on Friday.

Provinces in Western Visayas and the rest of Luzon may experience scattered showers and thunderstorms.

While expecting to further gain strength, Pagasa said the typhoon would leave Philippine territory by Friday evening or early Saturday and make its way to mainland China.

The floodwater rose up to 3 feet (0.9 meters) in affected areas in the towns of Masantol, Macabebe and San Simon, according to the Provincial Disaster Risk Reduction and Management Council (PDRRMC).

The water level at the sections of the Pampanga River in Candaba, Mexico and Apalit towns were also near the alert levels as of Thursday morning, threatening to overflow to nearby residential areas, the PDRRMC said. The Pampanga River drains to 30 river systems in Central Luzon. 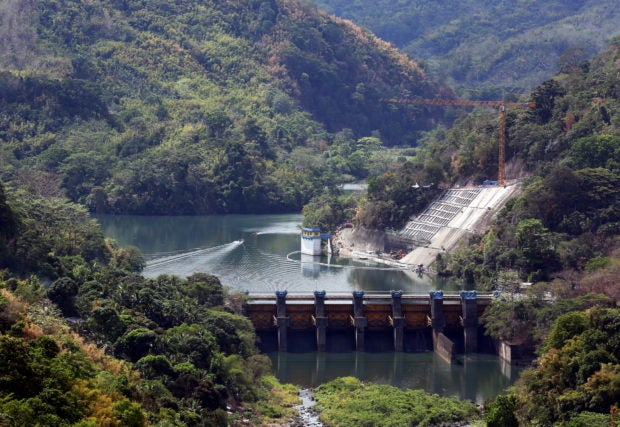 Flooding could worsen in Masantol and Macabebe as the water flowed downstream to the Manila Bay.

In Zambales, at least four families, or 18 individuals, in Barangay San Juan in San Antonio town were evacuated to safety as the Pamatawan River reached the critical level.

De Jesus said the families living on the Pamatawan riverbank were taken to San Antonio Municipal Gymnasium where they would temporarily stay.

In Bulacan, rains spawned by the southwest monsoon slightly increased the elevation in the Angat Dam, data from the Bulacan PDRRMC showed.

But the Bustos Dam below the Angat Dam released up to 156 cubic meters of water per second starting Tuesday until early Wednesday morning. Its elevation rose to 17.35 masl on Tuesday, or above the 17.30-masl spilling level.

The discharge at the Bustos Dam was stopped when the elevation settled at 17.28 masl.

In Occidental Mindoro, the provincial government suspended work at the capital town of Mamburao and in the municipalities of Sablayan and Lubang due to flooding. Only offices engaged in front-line disaster response, security units and health facilities remained open.

In Sablayan town, at least 50 families, or 134 individuals, were rescued from flooded areas, according to the police.

Sea trips between the ports of Tilik in Lubang and Calatagan town in Batangas were also canceled on Thursday because of rough seas, the municipal government of Lubang said.

In the town of Sta. Cruz, an undetermined number of commuters were stranded when a temporary steel bridge in barangay village Lumangbayan was flooded on Thursday.

Read Next
US defense chief set to arrive July 29
EDITORS' PICK
Karding damage to infrastructure at P23M
Bongbong Marcos says PH ‘open for business’ with new Clark Airport terminal
Sierra Madre stands up to Karding, but needs protection vs the humans it saves
Reignite your passion with the vivo Y35
House energy committee chair Arroyo bats for cheap electricity
UNFPA Philippines Career Opportunities
MOST READ
Badoy not with Office of the President, NTF-Elcac, under Marcos admin — solon
Angelica Panganiban ‘duguan, sugatang mom’ one week into breastfeeding
Maja Salvador to star in new ABS-CBN TV series with Richard Gutierrez
Kris Aquino offers help for Lolit Solis’ dialysis needs amid her own illnesses
Don't miss out on the latest news and information.