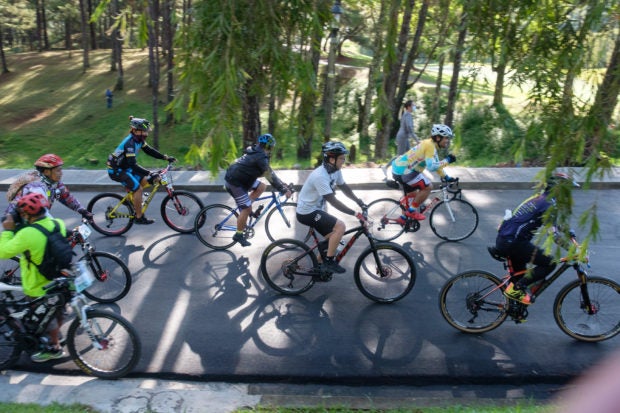 TREE-LINED ROUTE Bikers enjoy a short ride inside Camp John Hay, one of the areas in Baguio City still with a thick cover of pine trees. Bike lanes and shared roads are being designed by the city government for bikers and tourists so they can enjoy the outdoors safely. —NEIL CLARK ONGCHANGCO

BAGUIO CITY—This city is developing “shared roads” to accommodate bicycles, which have become a preferred mode of transport here since the pandemic began last year.

Six routes, spanning 13.7 kilometers that lead to downtown Baguio, may be equipped with bike lanes or may be “shared roads” that allow residents to pedal safely alongside motor vehicles, according to a plan by the city engineering office that was presented to the city council early this month.

Mass transport was suspended during the 2020 Luzon lockdown, prompting residents allowed to leave their homes for food or medical supply runs to walk or bike to the nearest stores.

The shared road principle was appropriate for a postpandemic environment where walking and biking to work or for leisure would still be accommodated, said Councilor Mylene Yaranon, who sponsored a proposed shared road ordinance.

“More people will walk or bike if they feel safe,” Yaranon said.

Biking has also become a marketing tool to promote tourism and reopen the economy in the Cordillera despite strict quarantines in the region, said Jovita Ganongan, regional director of the Department of Tourism (DOT) on Wednesday.

On July 18, more than 40 mountain bikers pedalled through 25 km of the so-called mountain trail from Lake Ambulalakaw in Kabayan, Benguet, to the newly designated highest point of the country’s highway system in Tinoc town in Ifugao province, Ganongan said.

The activity launched the DOT’s “bike to the highest point” project, Ganongan said.

Bicycle travel, she said, would allow more tourists to see nature after enduring almost two years of travel restrictions and community lockdowns.Congestion in city streets prompted a “walk in Baguio” campaign. Residents also pushed the “pedestrianization,” or allowing only pedestrians, of its main street, Session Road.

They also chose the 1.3-km route connecting the rotunda in front of Baguio General Hospital and Medical Center (BGHMC) to Panagbenga Park (former main gate of Camp John Hay); the 1.8-km stretch from Baguio Justice Hall to Kalaw Street; and the 1.4-km route from Gov. Pack Road to BGHMC rotunda.

The plan had determined that exclusive bike lanes could be placed in 7.25 km of the total 13.7-km shared roads.

But the proposed ordinance would need to be reviewed in order to comply with a guideline for bicycle lanes that was released by the Department of Public Works and Highways, Vice Mayor Faustino Olowan said.