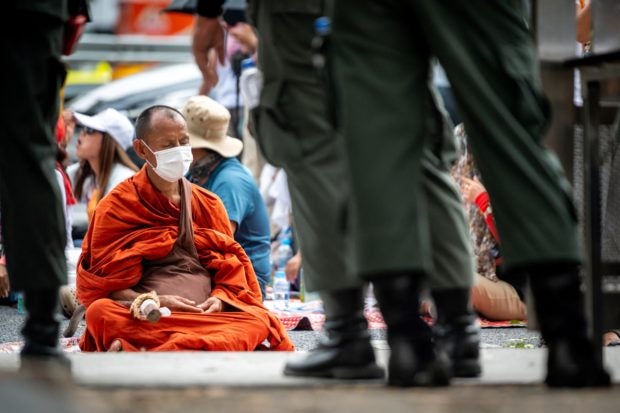 A monk meditates during a protest outside the Office of the Attorney General, as pro-democracy activists arrive to be indicted on charges of violating Thailand’s royal defamation law, in Bangkok on March 8, 2021. AFP

BANGKOK — A dozen Thai pro-democracy student activists were charged with royal defamation and sedition on Thursday, their lawyers said, over a rally last year that demanded reforms to Thailand’s unassailable monarchy.

The pro-democracy movement, which has been largely led by student activists, kicked off a year ago due to public discontent over Prime Minister Prayut Chan-O-Cha’s administration.

One key protest demand that emerged was monarchy reforms, a once-taboo issue that spilled into public discussion due to the student-led rallies that drew tens of thousands at their peak.

At one such protest in October last year, thousands marched to the German embassy in defiance of the king, who has spent long periods of time in Germany.

“All 12 have been charged with 112 (lese majeste) and 116 (sedition), with the youngest being 20 years old,” said the Thai Lawyers for Human Rights group, which represents the students.

“The main reason for the charges is the rally and speeches delivered in front of the German embassy.”

Lawyers are requesting bail for the students.

Abolishing Thailand’s draconian lese majeste law — which carries a maximum penalty of 15 years per charge — is among one of the key demands in the pro-democracy movement.

Critics have long said the law is broadly overused to target political opponents.

Scores of protesters have been hit with the royal insult law, with the most prominent figures earning multiple charges for different protests.

Other key demands of the movement include the resignation of Prayut — a former military chief who masterminded the 2014 coup — and for a rewrite to Thailand’s military-scripted constitution.

But in recent months, as Thais weather a deadly Covid-19 surge, protesters have pivoted their grievances to Prayut’s handling of the pandemic.

This week, the hashtag “Prayut Get Out” started trending as Thailand placed more provinces under a partial lockdown amid a record number of new infections on a near-daily basis.

Currently there are more than 453,000 Covid-19 cases and 3,697 deaths — the bulk of the toll detected since April after an outbreak in night clubs frequented by Bangkok’s political elite.

Read Next
VP also immune from suit, being an impeachable official — Macalintal
EDITORS' PICK
After tagging her as a ‘destabilizer,’ Panelo congratulates Diaz on Olympic win
Tips for a cheerful life
Harnessing technology for quality education
‘I believe’: Hidilyn Diaz bucks the odds to win historic Olympic gold
Connect to PH’s fastest network with new Signature Plan Lite at only P599 per month
Hidilyn Diaz’s gold prize to reach more than P35M
MOST READ
Duterte went to restaurant, not hospital, after final Sona
Panelo congratulates ‘destabilizer’ Diaz on Olympic win
‘Kasi may nagtapak sa paa ko,’ Duterte says after losing balance during Sona
Ate Shawee, impersonator and stand-up comedian, dies at 45
Don't miss out on the latest news and information.