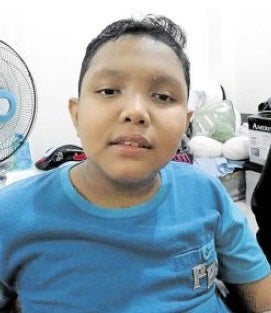 MANILA, Philippines — Despite the challenges posed by his illness and the COVID-19 pandemic, 12-year-old Marion Melaya was able to graduate from elementary school this year.

In 2017, Melaya was in Grade 3 when he turned pale and developed a persistent fever that prompted his mother, Karen, to bring him to a doctor who prescribed folic acid and referred him to a hematologist at the Philippine General Hospital (PGH).

A bone marrow test led to the diagnosis that her son was suffering from acute lymphoblastic leukemia, Karen told the Inquirer. According to her, he often has a high fever and is irritable.

In August 2020, Melaya was rushed to PGH because he was delirious with fever and did not even recognize his parents. The doctor said the results of a lumbar tap showed that the cancer had reached his brain, putting pressure on it.

Melaya is currently on his fourth cycle of chemotherapy. His treatment and medication are being shouldered by the Philippine Health Insurance Corporation (PhilHealth). He is also looking forward to enrolling in high school and fulfilling his dream of becoming a police officer.

A financial battle, too

But his doctor is concerned about a cataract in the boy’s left eye that has left him almost blind.

Before his eye can be treated, Melaya must undergo a urine CMV test at the National Kidney and Transplant Institute to determine if there are possible complications. The test costs P10,700.

Melaya’s father was among the many workers who lost their jobs due to the pandemic but luckily, he was recently hired as a driver. Although his PhilHealth membership pays for his son’s chemotherapy, his salary is barely enough for the family’s basic needs, much less laboratory tests.

Karen also expressed concern over reports of the increasing number of Delta variant cases, which she said could complicate her son’s chemotherapy sessions at PGH, one of the COVID-19 referral hospitals in Metro Manila.

“It will be hard but we can do it. Marion is a strong boy. I wish that he will get better and become cancer-free,” she said.