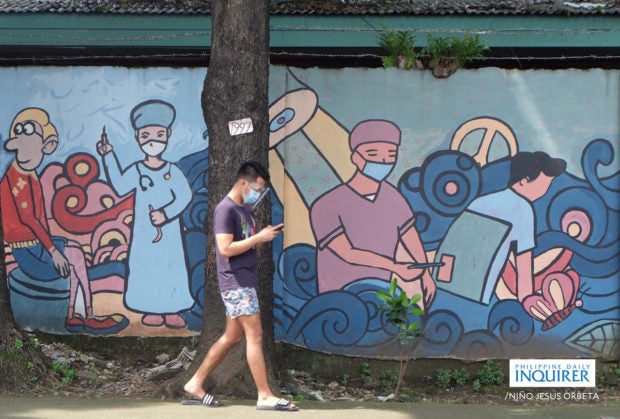 MANILA, Philippines — Metro Manila mayors said they would implement strict COVID-19 health and safety measures on the assumption that the more infectious Delta coronavirus variant was already spreading in the National Capital Region (NCR) as the Department of Health (DOH) and an independent pandemic monitor on Tuesday reported an uptick in COVID-19 cases in the region.

The DOH last week said at least 16 more had been infected with the Delta variant, which was first detected in India and now fueling deadly surges in several Southeast Asian countries. Health authorities said 11 of the 16 were infected locally while the five others were returning overseas Filipinos.

“We assume that we already have the Delta variant so we are able to prepare and get ready for the worst,” Parañaque Mayor Edwin Olivarez, chair of the Metro Manila Council, said in an interview with ABS-CBN’s Teleradyo on Tuesday.

A day earlier, Metro Manila Development Authority chair Benhur Abalos said all the 17 mayors of NCR wanted children again restricted to their homes, just 10 days after the Inter-Agency Task Force for the Management of Emerging Infectious Diseases (IATF) allowed them to go outdoors, and visit parks and other open spaces.

“Five to 17-year-olds are not vaccinated and they could possibly be superspreaders,” Abalos said during a meeting with President Rodrigo Duterte in Malacañang on Monday.

Olivarez said that a week ago, the Metro Manila mayors were all for allowing kids to go out “for their mental, emotional and physical well-being” after almost two years of being cooped up at home. But the emergence of the Delta variant forced them to reconsider.

The mayors, however, are not proposing to quarantine the entire NCR, preferring lockdowns only of specific localities — the so-called granular lockdowns of places where there is a clustering of the COVID-19 Delta variant cases “because we cannot sacrifice the entire city, LGU, or NCR.”

“It may be one building, street, a ‘purok,’ and at the most a barangay. Granular lockdown would be effective in containing the variant,” Olivarez said. The Metro Manila mayors’ recommendation to keep kids at home was supported by infectious disease expert Rontgene Solante.

A child who gets infected could spread the virus to members of the household, especially to those who had not been vaccinated, he said during Tuesday’s Laging Handa briefing.

The independent OCTA Research group on Tuesday said the reproduction rate of the virus went up to 1.06 in Metro Manila, the first this had gone above 1 in the national capital since April 18.

“This uptick in the NCR is a cause for concern but not yet a cause for alarm, as it is still too early to determine if this will continue to [be] an increasing trend,” OCTA said in a report.

The reproduction rate measures how fast the virus spreads. A reproduction number of 1 or higher indicates sustained transmission of the virus.

Health Undersecretary Maria Rosario Vergeire said that while NCR was still classified as “low risk,” there have also been more hospital admissions and cases in the capital in recent days.

“Looking at each city, we have observed that there has been a slight increase in cases. We are also observing a slight uptick in the number of people who are going to hospitals because of COVID-related symptoms,” Vergerie said.

Of the 14 others who were earlier reported to have recovered, eight were found positive for the Delta variant after a retest — one in Manila, four in Cagayan de Oro City, one in Misamis Oriental province, and two of the five who had returned from abroad.

The eight cases, all asymptomatic, were quarantined and will be constantly monitored until they test negative.

“Their viral loads are already low, so they’re not likely to be too infectious,” Vergeire said. In all, there have been 35 identified Delta variant cases in the Philippines.

In his weekly television appearance, the president said there may be a need to reimpose “stricter restrictions to avoid mass gathering and prevent superspreader events.”

“I urge the Department of the Interior and Local Government and the Philippine National Police to implement the existing protocols with greater urgency and necessity.

It is only by imposing these restrictions that we can fight the threat of Delta variant,” the president said.

At the Laging Handa briefing on Tuesday, DILG Undersecretary Epimaco Densing III said law enforcers had been directed to look into political meetings in relation to next year’s elections because they could become superspreader events.

“I wish our politicians will have second thoughts and not to proceed yet with their meetings because these are mass gatherings,” he added.

The warnings against political gatherings from Duterte and Densing followed a meeting of the Partido Demokratiko Pilipino-Lakas ng Bayan faction led by Energy Secretary Alfonso Cusi at Clark Field in Pampanga province attended by  Duterte, who was not wearing a face mask.

The recovery of 5,240 patients increased the number of survivors of the severe respiratory disease to 1,444,253.