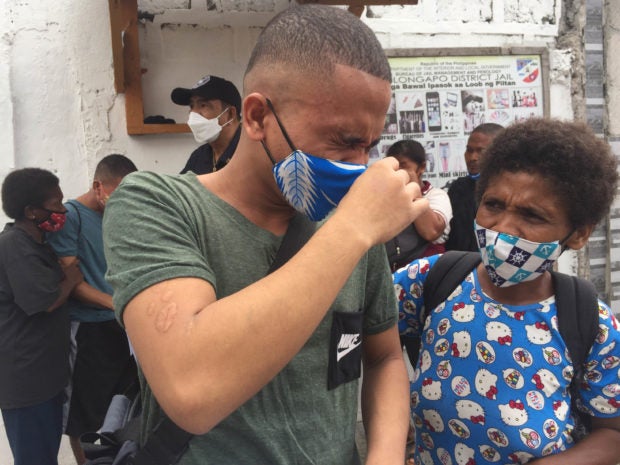 FREE AT LAST Junior Ramos, 19, is comforted by his mother, Anna, shortly after his release from detention in Olongapo City on Monday. Charges in relation to the Anti-Terror Act of 2020 filed against Ramos and his brother-in-law, Japer Gurung, 30, (partially hidden behind him), were dismissed by a local court due to insufficiency of evidence. —JOANNA ROSE AGLIBOT

MANILA, Philippines — A group of rights advocates on Tuesday assailed the “continuous terror-tagging” by the government’s anti-insurgency task force even after an Olongapo court had dismissed terror charges against two Aeta men in a landmark case.

According to the group Karapatan, the designation of the National Democratic Front of the Philippines (NDFP) as a terrorist organization by the Anti-Terror Council (ATC) shows “the same dangerous tactic of terrorist tagging” and “brazen violation of due process” used against ordinary citizens like Aeta farmers Japer Gurung and Junior Ramos.

“A court has already shown how the NTF-Elcac (National Task Force to End the Local Communist Armed Conflict) and the military can falsely charge and jail individuals using the terror law under legally dubious bases.

The ATC’s arbitrary designations are also equally dubious, if not totally baseless and malicious,” Karapatan secretary general Cristina Palabay said in a statement.

But Defense Secretary Delfin Lorenzana backed the terrorist tag on the NDFP, the political arm of the Communist Party of the Philippines (CPP), citing its “indispensable role” in the armed insurgency.

The Armed Forces of the Philippines also welcomed the terrorist designation of the NDFP,  saying it was “a long time coming.”On Monday, the Olongapo Regional Trial Court Branch 97 junked the case against Gurung and Ramos.

It said the prosecution “failed to discharge the burden of proving the identities of accused as perpetrators of the crime of terrorism.” On that same day, the ATC made public its Resolution No. 21 designating the NDFP as a terror group.

In a surprise move, the NTF-Elcac, along with the National Commission of Indigenous Peoples (NCIP), welcomed the dismissal of the case and claimed they were working “to remove our [indigenous] brothers from the exploitative clutches of the CPP-NPA-NDFP, including their front organizations, like Karapatan.”

Palabay laughed off the charge. She said it was the NTF-Elcac that had “shamelessly exploited the case,” removed the Aeta farmers  from the representation of the National Union of Peoples’ Lawyers (NUPL), and “proceeded to legally represent the same people they have charged.”

She was referring to Solicitor General Jose Calida’s accusation that the NUPL had merely coerced the two farmers into filing an intercession in the ongoing hearings on the controversial Anti-Terrorism Act (ATA).

Palabay said the terrorist designation of the NDFP showed how the government could wield the law to Red-tag and brand political dissenters as terrorists and deny them due process.

She also said the ATC was showing its “warmongering character by shutting the doors to peace negotiations and resolving the roots of armed conflict toward just and lasting peace.”

“Members of the NDFP continue to lure and recruit people to join the New People’s Army (NPA) while the CPP itself admits and maintains through its own public media releases and documents the direct and indispensable role of the NDFP in its armed operations,” the defense secretary said a statement.

He said the NPA, also previously designated as a terrorist group, continued to launch attacks, “victimizing innocent civilians and destroying billions’ worth of crucial public infrastructure for a principle that has long since been rendered obsolete.”

The Department of National Defense “hopes that this development justifies and enables the defense sector to move forward in its efforts to address internal security concerns and lay the foundations of sustainable, lasting peace and national development,” Lorenzana said.

In his own statement, Capt. Jonathan Zata,  the AFP public affairs office chief, said the NDFP’s terrorist designation “affirms the duplicity of the CPP that commands their armed group NPA and the so-called legal front that provides support for their terroristic activities.”

“We believe that this decision by our higher civilian authorities will significantly help our troops on the ground by preventing the operation of underground mass organizations that recruit and raise funds for the armed group,” Zata said.