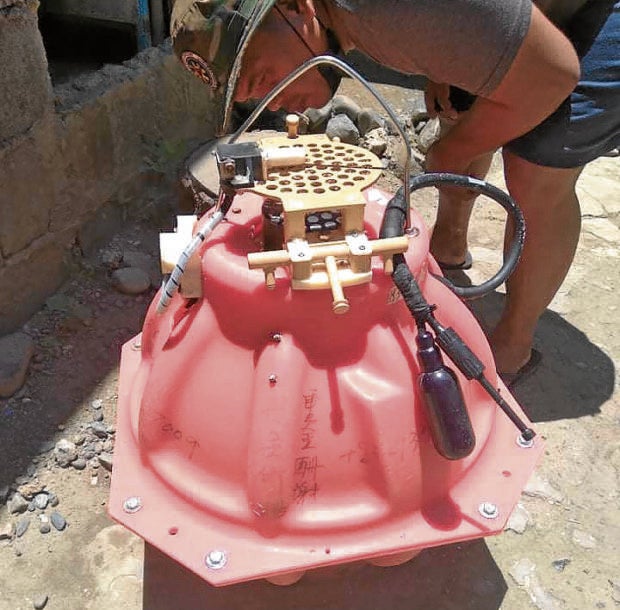 UNUSUAL FIND Fishermen found an ocean bottom seismometer, or OBS, in a recent trip to the West Philippine Sea, about 239 kilometers northwest of Infanta, Pangasinan. The equipment, bearing Chinese characters and used in oil exploration, was recovered within the country’s exclusive economic zone. —CONTRIBUTED PHOTO

The equipment, which bore Chinese characters, was confirmed by an expert to be an ocean bottom seismometer or OBS, according to the Peoples Development Institute (PDI), a partner of the fishers federation Bigkis ng Mangingisda.

Bigkis members found the device and turned it over to the Philippine Navy on Tuesday, PDI executive director Aurea Miclat Teves said in a telephone interview.

According to Teves, the fishermen led by Randy Megu were working on their payao, an artificial reef used to attract and catch fish in open waters, when his companions saw what looked like a buoy at 4:30 a.m. on July 1.

The object flashed a bright red light while floating about 10 meters away from where they were working, the fishermen said.

According to Megu, the payao is about 239 kilometers (129 nautical miles) northwest of Infanta town in Pangasinan province.

The fishermen brought the device home to Barangay Cato in Infanta.

Megu’s group sent photographs to Teves, asking help to identify what it was and to translate the Chinese characters it bore.

“Translated, these meant ‘safely salvage’ and ‘big reward.’ There was a telephone number in China as indicated by the country code 86,” Teves said. According to her, the website of the China Geological Equipment Group Co. Ltd, which claimed to be a state-owned geological equipment manufacturing enterprise, reported producing an OBS identical to what the fishermen found.

Teves said the firm described the OBS as “a kind of seismic observation system” placed at the bottom of the sea to detect both man-made and natural seismic activity and also widely used in oil exploration.

Professor Jay Batongbacal of the University of the Philippines Institute for Maritime Affairs and Law of the Sea, a consultant of PDI, coordinated the turnover. 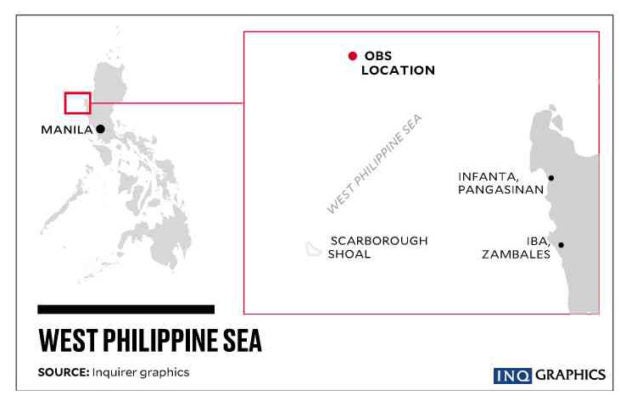 Teves said Batongbacal expressed concern over the discovery of the OBS within the country’s exclusive economic zone (EEZ). “The installation of this instrument, even for a benign purpose such as monitoring the seabed, should have been with prior consent of the Philippines because it is in the EEZ [and] it can be used for exploration and exploitation of natural resources, so the Philippines has the right to withhold consent,” Batongbacal was quoted as saying in a separate PDI statement.

The Chinese manufacturer claimed its OBS could collect three channels of seismic signal and one channel of hydraulic signal “with great resolution and consistency,” and could operate at depths of 6,000 m to 9,000 m and down to 12,000 m.

“PDI is aware that there are studies about the potential offshore oil and gas reserves within the Philippine EEZ and that China’s nine-dash line claim, which was rejected by the arbitral tribunal, was motivated mainly by its economic interests [and] not by what it says is its historic rights that were invalidated by the July 2016 award,” Teves said.

China, she added, “is not only violating the fishing rights of the Filipino fisherfolk in the [West Philippine Sea].

The OBS may be the objective proof that the Chinese are conducting scientific research, or more likely oil exploration, in our EEZ without any agreement whatsoever with the Philippine government, which is a violation of our country’s sovereign rights.”

This is not the first time that equipment with Chinese markings were recovered in the West Philippine Sea. In 2015, fishermen from Zambales found what were initially thought as floating containment booms with Chinese markings, about a kilometer long, 5.5 km from the shoreline of Cabangan town. A floating boom is usually used as a temporary barrier to contain an oil spill.

The undetermined source of the floating booms prompted provincial officials to seek an investigation on the origin of the objects.

Several fishermen said they believed the objects could have been washed away from Scarborough Shoal, since they saw similar objects near that area.

The interlinked buoys and metal pipes found in Zambales’ waters were part of dredging equipment, according to a former top executive of a company that manufactures equipment similar to those that the fishermen found.

The device is called a dredge floater assembly, which is composed of suction and discharge components, and is attached to a dredging machine while sucking up sand from the sea bottom.