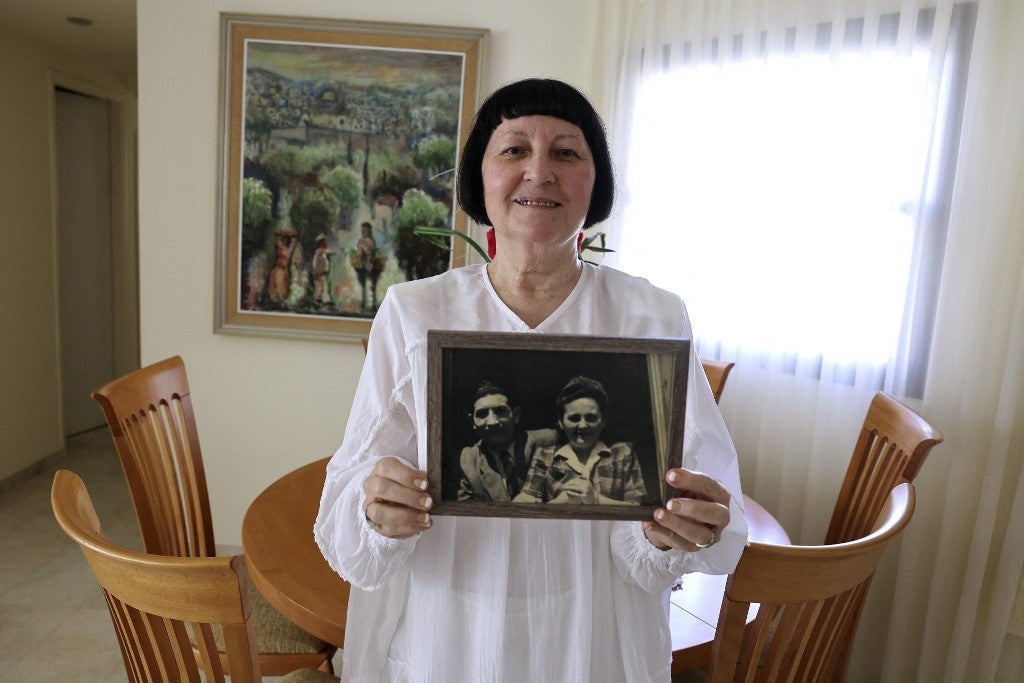 Shoshana Greenberg, 74, the daughter of a Holocaust survivor, poses for a picture holding a portrait of her parents Regina and Israel, at her home in Israeli city of Tel Aviv on July 18, 2021.  (Photo by MENAHEM KAHANA / AFP)

WARSAW — For Shoshana Greenberg, a new law making its way through the Polish parliament means abandoning any hope of compensation for the properties taken from her family during World War II.

Israel-based Greenberg, the daughter of a Holocaust survivor, launched a claim nine years ago on properties owned by her textile industrialist family in Lodz in central Poland.

“I feel like I lost a part of my body,” the 74-year-old said of the planned new legislation.

The new law sets a time limit on legal challenges for properties confiscated after the war, many of them during the Communist era, and would end up axing thousands of claims.

The controversial legislation was approved by the lower house of parliament in June, igniting a row between Poland and Israel, and is due to go before the Senate this week.

While the law covers both Jewish and non-Jewish former property owners and their heirs, lawyer Tomasz Ludwik Krawczyk said Jewish owners would be disproportionately affected because they were often late in making a claim.

“For obvious reasons after the war they were not in Poland and the ones who survived left Poland,” said Krawczyk, who specializes in restitution claims.

Six million Poles, half of them Jewish, were killed during World War II in Poland.

After the war, Communist authorities nationalized vast numbers of properties that had often been left empty because their owners had been killed or fled.

Non-Jewish claimants include Polish aristocrats whose properties were confiscated by the Communists.

Once Communism fell in 1989, Poland never adopted a comprehensive restitution law like other countries in Central and Eastern Europe, leaving it up to individuals to take their chances in court.

“I think the lack of a property restitution act makes the whole system unfair,” Krawczyk said.

The new law sets a 30-year limit on claims against administrative decisions on the status of properties, such as nationalization.

It would also apply to ongoing proceedings, which Krawczyk said was “manifestly unfair” as many claimants are late through no fault of their own but because of delays in the justice system.

“I would say that this is an attempt to stop the restitution procedure… done using a back door,” he said.

The Polish government has said the new law will provide greater clarity on property rights and eliminate the problem of rampant corruption and fraudulent claims made with forged documents.

But the law has been heavily criticized by Israel and the United States.

Israel has condemned it as “immoral” and “mind-boggling”, with Foreign Minister Yair Lapid saying: “On Polish soil, millions of Jews were murdered and no law will erase their memory”.

“Not one zloty, not one euro, not one dollar,” he said.

The government has said claims can still be lodged with civil courts.

But Krawczyk said that in practice this was complicated because claimants would have to prove that the original confiscation decision breached Communist-era laws, which cannot be done without a preceding successful legal challenge.

The World Jewish Restitution Organization (WJRO), which advocates for the recovery of formerly Jewish-owned properties around Europe, has criticized the new law as effectively legitimizing the actions of Poland’s Communist government.

“For many families, this property is a last tangible connection to a world that was destroyed… This legislation is rejecting that connection,” he said.

David Kotek, a 62-year-old Israeli, said he was making a claim for compensation for his grandfather’s house in the town of Sosnowiec that would be blocked by the new law.

Kotek said his grandfather and father were imprisoned but survived the Holocaust and moved to Israel and the property was eventually taken over by the municipality of Sosnowiec.

Their only thought after the war was to leave Poland, which meant they did not file a property claim in time.

For Kotek, the issue is also about justice and honoring the memory of Poland’s Jewish community — once the largest in Europe and now numbering only a few tens of thousands.

“We once had a big community in Poland and all these things will be forgotten,” he said.