Canada to admit vaccinated U.S. tourists after more than 16 months 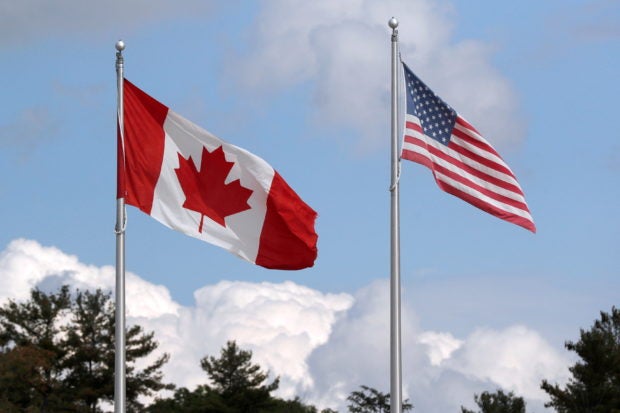 A U.S. and a Canadian flag flutter at the Canada-United States border crossing at the Thousand Islands Bridge, which remains closed to non-essential traffic to combat the spread of the coronavirus disease (COVID-19) in Lansdowne, Ontario, Canada September 28, 2020. (REUTERS)

OTTAWA  – Canada on Monday said it would allow fully vaccinated U.S. tourists into the country starting from Aug. 9 after the COVID-19 pandemic forced an unprecedented 16-month ban that many businesses complained was crippling them.

Inoculated visitors from countries other than the United States will be permitted to enter beginning on Sept. 7. The relaxation depends on Canada’s COVID-19 rates remaining favorable, officials said.

“Thanks to the rising vaccination rates and declining COVID-19 cases, we are able to move forward with adjusted border measures,” Prime Minister Justin Trudeau said at a news conference in Brampton, Ontario.

Some 50% of Canadian residents are fully vaccinated, and 75% have had one shot, government officials said.

Businesses in Canada and the United States, particularly the travel and airline industries, pushed for an end to restrictions on non-essential travel between the two countries, which were imposed in March 2020 at the beginning of the pandemic.

Since then, the land border has been closed to all non-essential travel. However, the United States has allowed Canadians to fly in, while Canada has not allowed Americans to do the same.

“As Canada moves from recovery into growth, having workable border measures for fully vaccinated travelers is critical for Canadian businesses,” said Perrin Beatty, president of the Canadian Chamber of Commerce.

Until now, the United States and Canada had extended the border restrictions month-by-month.

Canadian Public Safety Minister Bill Blair said U.S. officials told him it was likely Washington would extend its land border restrictions, which expire on Thursday, for an additional month.

“We are continuing to review our travel decisions and we’ll be guided by our public health and medical experts … I wouldn’t look at it through a reciprocal intention,” she told a briefing when asked about Canada’s decision.

People eligible to enter Canada must have been fully vaccinated at least 14 days beforehand. Children under 12 who are not vaccinated will not be required to quarantine if traveling with their fully inoculated parents.

The news should be a boost for Canada’s hard-hit airlines which have recovered more slowly from the pandemic than their U.S. counterparts. Ottawa is also lifting the requirement that all travelers arriving by air must spend three nights in a hotel.

Canada’s second-largest carrier, WestJet Airlines, said it was operating at 40% capacity in July compared with pre-pandemic levels in 2019.

Calgary-based WestJet said the move was “significant and positive step forward”. Shares in Air Canada – the nation’s largest airline – were trading down more than 3% in Toronto on Monday amid a broader decline.

Mike McNaney, President and CEO of the National Airlines Council of Canada, whose members include Air Canada and WestJet, welcomed the announcement but said, “we have almost lost the summer travel season.”

In a statement, Air Canada said the loosening of the border restrictions was “an important step” and added that it had announced a new summer schedule with up to 220 daily flights between the U.S. and Canada.