Australia to extend COVID-19 lockdown in Victoria amid Delta outbreak 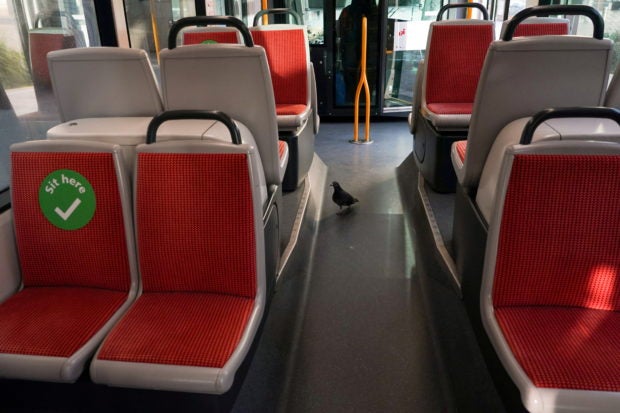 A pigeon walks down the aisle of a light rail tram devoid of passengers at Circular Quay during a lockdown to curb the spread of a coronavirus disease (COVID-19) outbreak in Sydney, Australia, July 12, 2021. REUTERS FILE PHOTO

SYDNEY — Australian authorities on Monday said Victoria state will extend a COVID-19 lockdown beyond Tuesday despite a slight drop in new infections as the country’s two biggest cities fight to stop the spread of the highly infectious Delta variant.

Victoria state Premier Daniel Andrews said lockdown rules would not be lifted as cases were still being detected in the community, promising more details would be provided on Tuesday.

“It would be perhaps a few days of sunshine and then there is a very high chance that we’d be back in lockdown again. That’s what I’m trying to avoid,” said Andrews in explaining why the lockdown would not be lifted as scheduled.

Victoria, the country’s second most populous state which includes Melbourne, on Monday reported 13 locally acquired cases, down from 16 a day earlier. All new local cases are linked.

Nearly half of Australia’s 25 million population has been confined to their homes with Sydney, the country’s largest city, in a five-week lockdown, and all of Victoria state under stay at home rules, after the fast-moving Delta strain triggered the country’s worst outbreak for this year.

New South Wales (NSW) state, of which Sydney is the capital, reported 98 new locally-acquired cases, down from 105 a day earlier. At least 20 of the new cases were infectious while in the community, roughly in line with the last few days.

“That 20 number is the number we are really keen to nudge … the closer we get that number to zero, the sooner we can end the lockdown,” NSW state Premier Gladys Berejiklian said during a televised media conference.

There are currently 82 people in hospitals, with 24 in intensive care, seven of whom require ventilation.

NSW has twice extended lockdown measures in Sydney since it was first imposed on June 26, with the tough restrictions now scheduled to end on July 30.

Though cases dipped on Monday, Berejiklian said the state would not see the effects of the hard lockdown for “another four or five days” and pleaded with people not mingle with extended family as most infections are occurring within families.

Swift contact tracing, a high community compliance of tough social distancing rules and lockdowns have helped Australia quash past outbreaks and keep its COVID-19 numbers relatively low. Just over 31,900 cases and 914 deaths have been reported.

Australia could be heading into a new cycle of stop-and-start lockdowns until the end of the year until it hits high vaccination coverage, experts have said.

A poll by the Australian newspaper on Monday showed the slow immunization drive, with just 13% of the country’s adult population fully vaccinated, have pulled down Prime Minister Scott Morrison’s approval ratings to the lowest level in more than a year.

Officials are also frustrated after reports of people breaching social distancing rules in Sydney prompting the state police to begin “high-visibility patrols” along the coast, including the popular tourist spots of Bondi and Manly.

Controversial British commentator Katie Hopkins will be deported after she posted a video on Instagram joking about answering the door naked and maskless to people delivering meals while she was in quarantine in a Sydney hotel.

“To think that she could think that the measures we are taking to keep our community safe can be treated with such juvenile, imbecile behavior is mind boggling,” NSW state Health Minister Brad Hazzard told reporters.