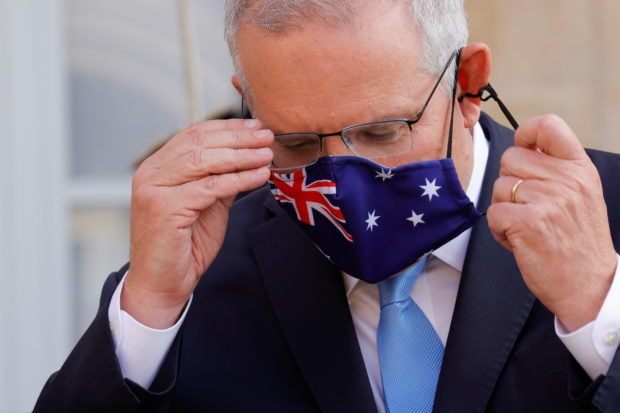 Australian Prime Minister Scott Morrison adjusts his mask during a news conference he holds with French President Emmanuel Macron in front of the Elysee Palace in Paris, France, June 15, 2021. REUTERS

SYDNEY — Australian Prime Minister Scott Morrison’s approval ratings fell to the lowest level in more than a year, according to a poll published on Monday, as a sluggish COVID-19 vaccine rollout dented voters’ confidence in his conservative government.

A Newspoll conducted for The Australian newspaper showed Morrison’s public support dropped two points to 51% over the last three weeks, the lowest level since he faced criticism early last year over his response to devastating bushfires.

Morrison has come under increasing pressure as a slow national vaccine rollout leaves Australia exposed to a deadly new wave of the coronavirus pandemic. Sydney and Melbourne, the country’s biggest two cities, are in lockdown in a bid to stem a fast-moving outbreak of the Delta variant.

If the poll result was replicated at an election, the conservative government would suffer “a significant defeat” against centre-left Labor, The Australian reported.

After a 2019 general election gave the coalition a wafer-thin majority, Morrison’s popularity initially surged during the COVID-19 crisis as measures including closing the international border, social distancing and speedy contact tracing kept Australia’s overall exposure relatively low. The country has recorded just over 31,900 cases and 914 deaths.

But delays with the vaccine rollout – just 13% of the country’s adult population of around 20 million are fully vaccinated – have frustrated voters.

Morrison’s handling of the pandemic fell nine points in the past three weeks to 52%, according to the Newspoll, far below the 85% rating at the previous peak of the pandemic in April last year. Confidence in the vaccine rollout slumped to 40%.

Morrison has suggested changing medical advice for the country’s mainstay AstraZeneca’s vaccine and supply constraints for Pfizer’s vaccine have been to blame.

The Newspoll was based on surveys of just over 1,500 voters in metropolitan and regional areas from Wednesday to Saturday.