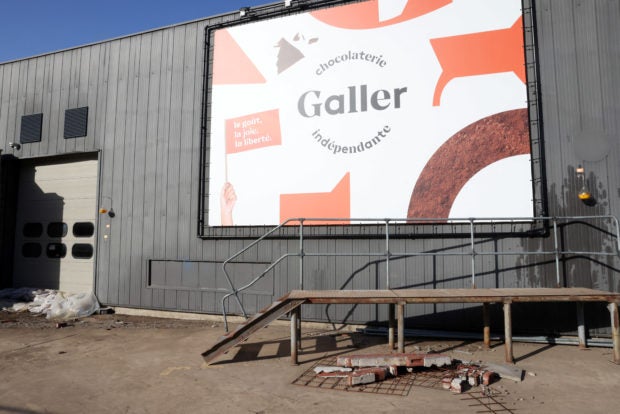 This photograph taken on July 17, 2021 shows the Galler chocolate factory, destroyed by a severe flooding following heavy rainfalls, in Vaux-sous-Chevremont, near Chaudfontaine. AFP

CHAUDFONTAINE, Belgium — As the floodwaters receded in the river valleys of industrial eastern Belgium, the smell of cocoa was mixed with the stench of spilled fuel oil and churned up river mud.

Among the many businesses knocked temporarily out of action by the unprecedented inundation was the Galler factory, home to one of the country’s iconic luxury chocolate brands.

Built on the banks of the now churning Vesdre river, in Vaux-sous-Chevremont in Chaudfontaine commune outside the city of Liege, the plant ships high-end bars to aficionados as far away as Japan.

In Belgium, which styles itself the world capital of chocolate, it is accredited to supply the royal court of Philippe, king of the Belgians, alongside the likes of Godiva and Leonidas.

But, after a week of torrential rains sent waves of water surging down the narrow valleys of this former coal-mining area near the German border, part of the front wall of the plant has collapsed.

Tools and workstations are swept into piles, and muddy water has stained the walls 1.8 meters (six feet) above its normal level.

“It’s time to take stock,” said Valerie Stefenatto, the 32-year-old communications manager, as she walked the premises in rubber boots, telephone in hand. 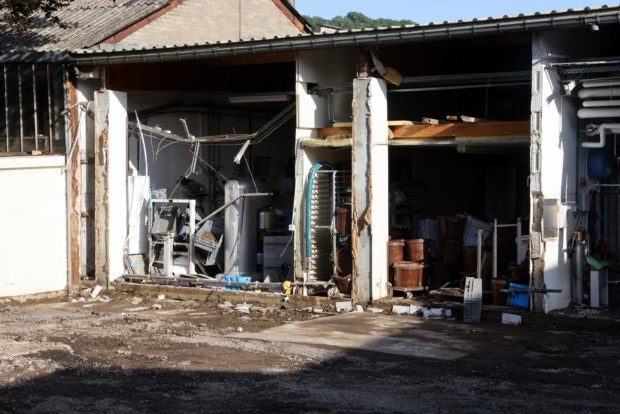 This photograph taken on July 17, 2021 shows destroyed equipment and buildings at the Galler chocolate factory, destroyed by a severe flooding following heavy rainfalls, in Vaux-sous-Chevremont, near Chaudfontaine. AFP

“The priority now is to secure the factory and to get the electricity back on, to see if the machines are still working or not.”

Vats of raw ingredients had been knocked over or burst and the smell of chocolate drifted through the air.

At Galler and at other businesses across the south and east of the country, questions will be asked.

Why were meteorologists’ and climate scientists’ warnings unheeded? Why did the government not act?

Here, when the river level started to rise on Wednesday, staff stacked sandbags and shut off production, but they had no way of predicting the wall of water that hit on Thursday.

“The factory has been here since 1976. We’ve never known a flood in Vaux-sous-Chevremont,” Stefenatto sighed.

Things could have been worse. Stocks of finished chocolate were stored in a depot on higher ground, north of Liege, and the wider commune has seen five residents killed and dozens left homeless.

“We have colleagues who have lost everything,” Stefenatto said, as exhausted workers found plastic chairs on the parking area. “To get get back on our feet, we’ll have to focus on the morale of the troops.”

But a delivery truck and its 10 meter container has been tossed across the loading area, and it’s too soon to say when the 60-strong workforce will be able to get back to work.

Before the coronavirus pandemic, Galler produced 1,700 tonnes of chocolate per year and turned over 30 million euros. It had ambitious expansion plans, backed by a Liege consortium and by foreign investors.

“We don’t yet know how long it’s going to take. One, two, three months? It’ll depend whether we decide to focus on certain markets, Belgian or European,” Stefenatto told AFP.

The storms have now moved east and south, bringing devastation to Germany and threatening Austria’s Alpine valleys. The final economic and human toll in Belgium, where a least 27 are dead, is not yet known.