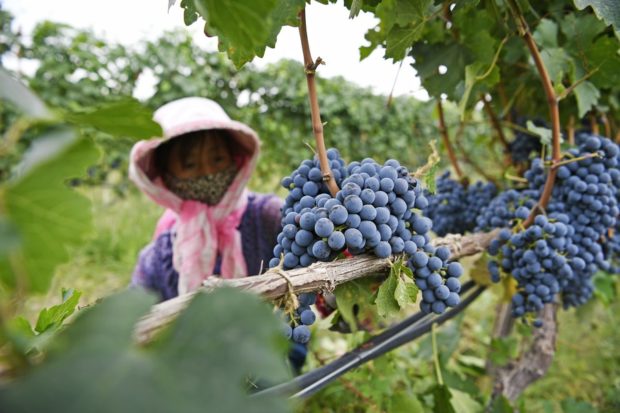 YINCHUAN — China has launched a national pilot zone to develop premium wine on the edge of the Gobi Desert, aiming to turn the eastern foothills of Helan Mountain into China’s Bordeaux.

The National Open Development Comprehensive Pilot Zone for Grape and Wine Industry was inaugurated on July 10 in Minning township, Northwest China’s Ningxia Hui autonomous region, which is located between 37 degrees and 39 degrees north latitude — considered to be within the “golden zone” for growing wine grapes.

The pilot zone — the first of its kind in China — with a planned area of more than 500 square km, is expected to cultivate 1 million mu (about 66,667 hectares) of vineyards in five years, with an estimated output value of 100 billion yuan ($15.4 billion).

In the next 15 years, the goal of the wine zone is to have 1.5 million mu of vineyards, with a total output value of 200 billion yuan.

“If this goal can be achieved, the pilot zone will become one of the largest quality wine producing areas in the world,” said Sui Pengfei, director general of the international cooperation department, Ministry of Agriculture and Rural Affairs, at the launch ceremony.

Wineries based in the wine area of Ningxia won 80 medals at the 2021 Concours Mondial De Bruxelles held in Brussels in mid June, including three grand gold medals, 43 gold medals and 34 silver medals, ranking first in the medal tally among China’s wine-producing areas.

Cao He, a winemaker at Chateau Vegani in Minning, had his Matheran wine won the grand gold medal at the international competition in Belgium. 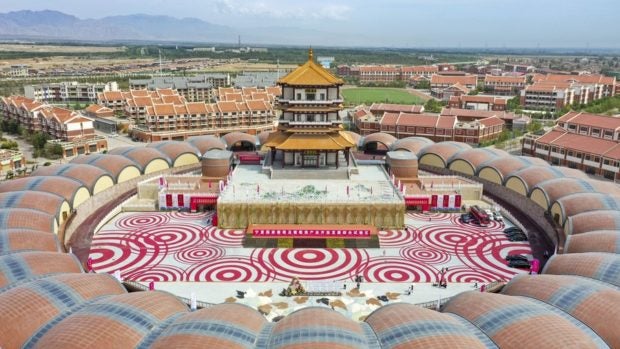 “The most interesting and fulfilling thing as a winemaker is to brew the wine you want by accurately controlling the grape plantation and brewing process, and everyone says yes after tasting it,” said Cao, 33.

Founded in 2014, Vegani Winery currently boasts 500 mu of vineyards producing about 130,000 bottles of wine a year.

Compared with major international wine producers, China’s modern wine industry started late, and the Helan Mountain wine area is even younger. The first bottle of wine was brewed in the desert region in 1984.

A Chinese TV drama series, depicting how grape plantation and cattle breeding were among poverty alleviation measures in Minning township, has garnered millions of views on YouTube. The Chinese drama “Shanhaiqing” goes by the English title “Minning Town.”

While in a few decades, the edge of the Gobi Desert has been transformed with extending vineyards irrigated by water sourced from the Yellow River.

Currently, the coverage of vineyards in Ningxia accounts for one fourth of China’s total, yielding 36 high-quality grape varieties. There are 211 wine chateaux — completed or under construction — with an annual output of 130 million bottles of wine, accounting for 60 percent of China-produced wines.

Chilean Ambassador to China Luis Schmidt Montes extended his congratulations on the launch of the wine pilot zone. He said that the path outlined through this initiative for the grape and wine industry in Ningxia would allow the development of this industry to compete with the most prominent wine-producing regions in the world side by side.

By designating the wine area as a national pilot zone, China hopes to optimize the whole-chain development of the wine-manufacturing industry and introduce measures and standards of the International Organization of Vine and Wine countries to help regulate the sector.

Sui, the official with the Ministry of Agriculture and Rural Affairs, said the establishment of the pilot zone can encourage government departments and market entities to “boldly try” all measures and models that can help industrial development.

The beautiful architecture of chateaux and wine tasting areas have turned wineries into popular tourist spots.

Zhang said she believes that with the pilot zone’s preferential policies, the wine zone will become more and more internationally competitive.

Christelle Chene from Burgundy, a famous wine region in France, came to Xige Estate, a winery in Ningxia, in 2019 to work on promoting the local winery products in the global market.

“In Ningxia, I have got my favorite wine taste with a rich fruity aroma and delicate tannin. I want to promote the wines here to the whole world,” she said.

The wine and grape industry has become an important pillar of Ningxia’s sustainable economic development, offering more than 120,000 jobs. Vineyards cultivated in deserts also have ecological functions of water and soil conservation.

Qu Dongyu, director-general of the Food and Agriculture Organization of the United Nations, sent a letter of congratulation on the launch of the pilot zone.

“Being one of the major origins of ancient agricultural civilizations in East Asia and sitting in the heart of wine grape production zones, Ningxia enjoys considerable advantages and enormous potential in developing grape and wine industries with distinctive regional characteristics,” Qu said in the letter.