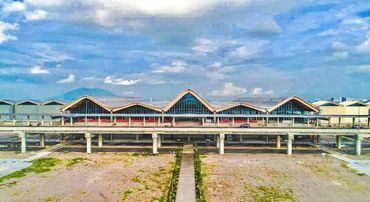 CLARK FREEPORT—The planned opening of the new passenger terminal of the Clark International Airport (CRK) this July for domestic travels may not push through.

What was scheduled this July 17 was an “inspection” by President Rodrigo Duterte, according to an advisory by the Department of Transportation (DOTr) to media.

There is still no specific date for the new terminal’s opening, with Transportation Secretary Arthur Tugade saying in his social media post that it is “slated to open very soon.”

It is among the six projects in the Build, Build, Build infrastructure program of the Duterte regime in Clark.

Tugade inspected the facility recently after the Megawide-GMR Construction Joint Venture Inc. handed over the certificate of completion of the project last Jan. 22.

The new terminal will start handling international passengers in September, DOTr announced last June. It can handle up to 12.2 million passengers yearly.