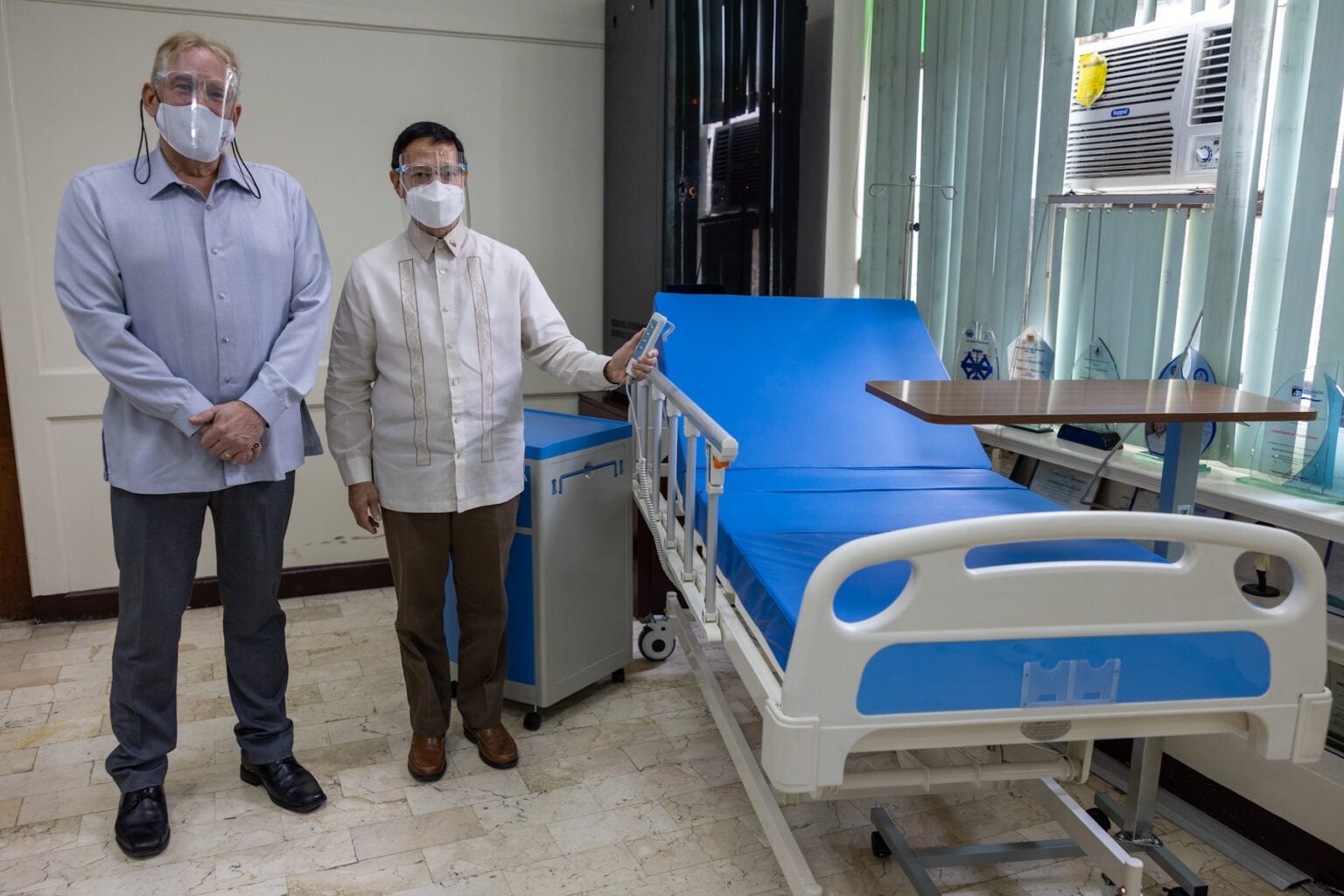 US DONATIONS Health Secretary Francisco Duque III (right) formally receives one of the 420 intensive care unit beds donated the United States. At left is US Charge d’Affaires John Law. —PHOTO FROM THE US EMBASSY IN MANILA

President Duterte approved on Thursday the extension of the general community quarantine (GCQ) in Metro Manila and nearby provinces from July 16 to July 31 as infections in some cities are not declining and concerns about the more contagious COVID-19 Delta variant are mounting.

Presidential spokesperson Harry Roque said on Thursday that the pandemic task force cited several factors for the extension, including the rising cases in seven cities and high level of utilization of intensive care facilities.

Makati and Muntinlupa were also at high-risk level in terms of intensive care unit usage while the other five cities were at moderate levels, De Guzman added.

Roque said other factors, such as the average daily attack rate and two-week growth rate as well as the local government units’ capacities to isolate suspected and confirmed cases within 24 hours and improved contact tracing ratio were also factors in the extension of GCQ in the NCR Plus (Metro Manila and the provinces of Bulacan, Cavite, Rizal, Quezon and Batangas).

Roque said all other areas in the country would be placed under modified general community quarantine for the remainder of the month.

The government is also studying whether to impose restrictions on travel to and from Malaysia and Thailand to prevent the entry of the Delta variant.

Health Secretary Francisco Duque III, speaking at the televised Laging Handa public briefing, mentioned Malaysia and Thailand as among the countries being evaluated by the Inter-Agency Task Force for the Management of Emerging Infectious Diseases for travel restrictions.

New COVID-19 cases in Malaysia reached a record high of 11,618 on July 14 and that the Delta variant was in almost every Malaysian state, according to De Guzman.

The official said the Department of Health (DOH) has adopted a “four-door strategy” to prevent the entry of COVID-19 variants. The first blocks the point of origin with travel restrictions. The second secures the point of entry through intensified screening, quarantine and testing. The third is the point of care, which pertains to hospitalization and the prevention-detection-isolation-testing-reintegration response in communities. The fourth, labeled the “epidemic surge” door, aims to stop spikes through strong health and critical capacity, timely management of cases and continuity of essential services.

Roque also disputed criticisms that travel restrictions imposed on Indonesia were too late, saying travelers who arrived from Indonesia in the past four months totaled only 724 and all underwent the required quarantine periods.

The Delta variant could cause more damage on the Philippines and other emerging markets because of their slow vaccination rollout, according to London-based think tank Capital Economics.

Capital Economics noted that the recent peak in COVID-19 infections due to the new strain was happening in emerging Asian markets, such as Indonesia, Malaysia and Thailand.

“The UK’s experience so far suggests that vaccination rates will play a big role in determining the economic damage caused by the Delta variant. Few countries currently match the UK’s level of vaccine protection, but at current rates of rollout most advanced economies will get there in the next month or so,” Capital Economics group chief economist Neil Shearing said in a July 14 report.

Meantime, the DOH on Thursday said it recorded 5,221 new COVID-19 cases in the country, pushing the total to 1.49 million. It also reported that 4,147 patients had recovered, bringing the total survivors to 1.42 million. However, another 82 succumbed to the disease, raising the death toll to 26,314.

In its Thursday monitoring report, independent research group OCTA also sounded the alarm on the rising reproduction number of 1.36 in Cebu City and 1.56 in Lapu-Lapu City from July 1 to July 7. A reproduction number, which measures how fast the virus spreads, of 1 or higher indicates a sustained transmission of the virus.