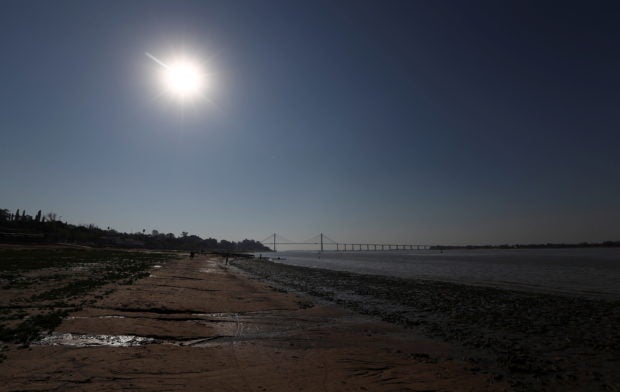 A general view of the Puente Nuestra Senora del Rosario (Our Lady of Rosario) bridge, which links the Rosario city in the Santa Fe Province with Victoria city in the Entre Rios Province, over the Parana River, in Rosario, Argentina July 8, 2021. REUTERS FILE PHOTO

BUENOS AIRES — Ships leaving the Argentine agricultural ports hub of Rosario on the Parana River are having to reduce cargos by thousands of tonnes due to low water levels, the local head of logistics said on Wednesday, amid growing environmental concerns.

Dryness in Brazil, where the Parana originates, has diminished cargo traffic and sparked worries by environmentalists about dredging the river below certain depths. The dryness has reduced the amount of cargo that can be carried by ships at the height of the Argentine corn and soy export season.

About 80% of Argentina’s agricultural exports are shipped from Rosario ports and down the Parana, out to the Atlantic.

“In normal times the sailing draft at Rosario is 10.51 meters, or 34 feet and six inches. Today we are sailing at 8.96 meters, or 29 feet and 4 inches. We are five feet two inches below normal sailing draft,” Wade said.

To keep the river’s depth at 34 feet, as contracted with the government, Parana dredging firm Jan de Nul has to pull increasingly massive amounts of mud from the river bottom.

But activists represented by the Argentine Association of Environmental Lawyers (AAdeAA) say this can dry out nearby wetlands and hurt aquatic life by lowering water oxygen levels, as well as affect water used locally by humans.

Dredging of the river makes the country one of the most efficient international grain suppliers. It is the world’s No. 3 corn exporter and top supplier of soymeal feed used to fatten hogs and poultry from Europe to Southeast Asia.

“It is not our intention to confront the agro-export sector, but rather for the sector to once and for all understand that it cannot destroy the most important river basin that our country has, after it has been in a state of absolute fragility in recent months due to low water levels,” Lucas Micheloud, a member of the AAdeAA, told Reuters in an interview on Wednesday.

The shallowness of the Parana threatens to cost the country’s grains farmers and exporters almost $315 million over a six-month period through August, the Rosario grains exchange said last week.

“The regional climatic trend shows a water scenario below normal, at least until September of this year. Levels in July could approach historic lows,” reached in 1944, the National Water Institute of Argentina said in a recent report.