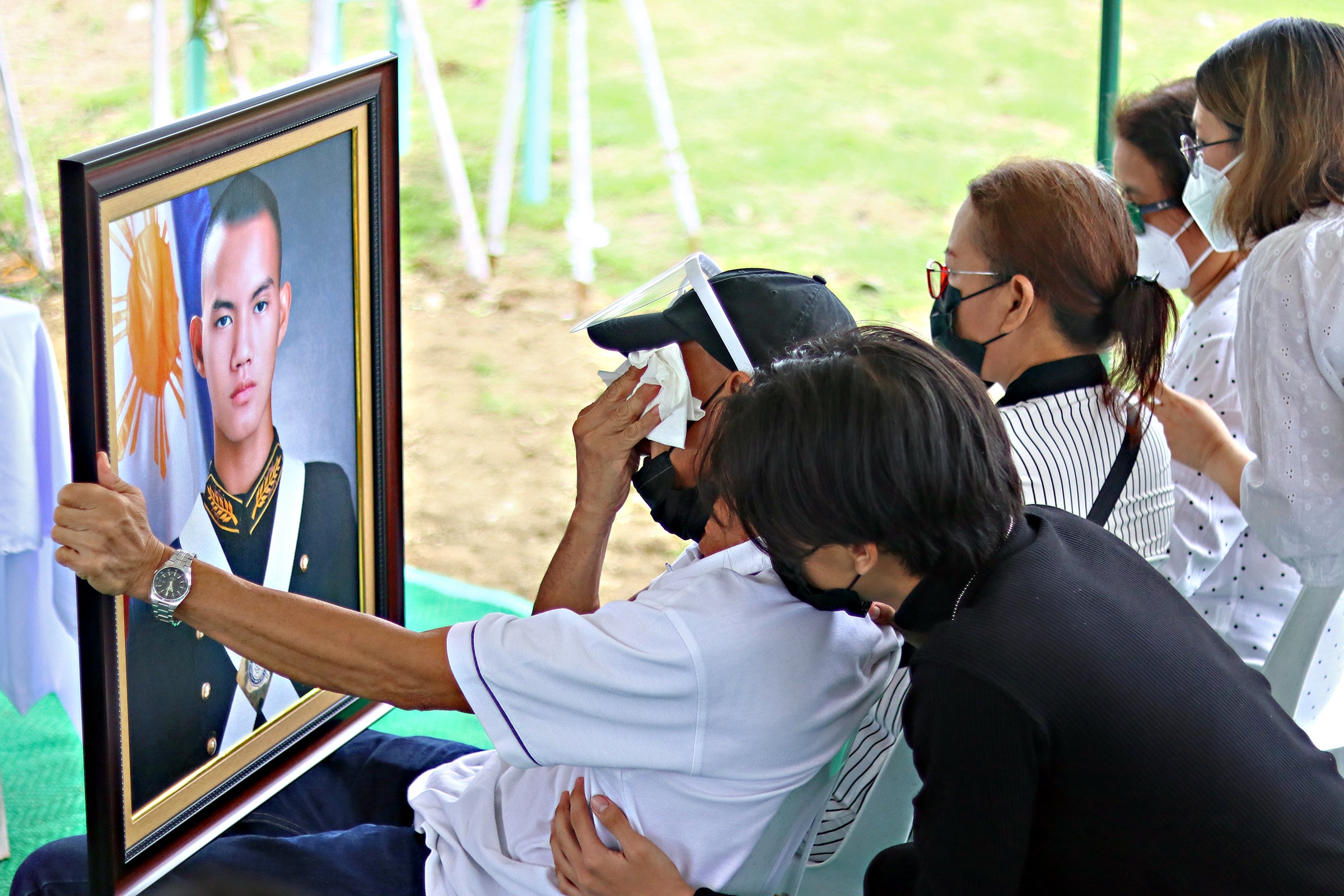 PAINED FAREWELL Crying for justice, the family of 19-year-old Philippine Merchant Marine Academy (PMMA) cadet Jonash Bondoc brings his cremated remains for burial at a Butuan City cemetery on Tuesday. An upperclassman has been arrested and charged with homicide over Bondoc’s death. —ERWIN MASCARIÑAS

BUTUAN CITY—The family of Jonash Bondoc, the 19-year-old cadet of the Philippine Merchant Marine Academy (PMMA) who died last July 6, has asked the National Bureau of Investigation to investigate what they believe to be a suspicious death.

“We believe that there is more to what the suspect has claimed and what the initial investigation has revealed,” said Glaiza Bondoc, the victim’s elder sister.

Bondoc’s cremated remains were buried in a private cemetery here on Tuesday with his family and friends asking for justice.

Bondoc was found unconscious in the restroom of their barracks on July 6. He was rushed to a hospital in San Marcelino, Zambales, where he was proclaimed dead.

A colleague, Midshipman Cadet 2nd class Jomel Gloria, was arrested and charged with homicide for Bondoc’s death. He was reportedly released on bail.

Gloria reportedly admitted having punched Bondoc on the chest during a sketchy incident just before the school year ended and cadets were sent home for a break on July 7.

Apart from the NBI, Bondoc’s sister also asked the Commission on Higher Education to do “an independent and impartial investigation into the real cause of my brother’s death.”

“Until then, there will be no justice for my brother and our entire family,” she said.

An autopsy report from the police regional crime laboratory in Zambales, a copy of which was provided by the Bondoc family, said that the victim died from a “blunt traumatic injury, causing hematoma to the back of the head and intracerebral hemorrhage from the back, left and part of the frontal lobes of the head.”

The autopsy also revealed that the victim had other contusions on his face, neck, arms and chest. The report further revealed signs of past contusions.

The Bondoc family members said these injuries could not be inflicted by a mere punch, rather, indicate he was mauled.

Agusan del Norte Rep. Lawrence Fortun, a lawyer, said there are circumstances that suggest that Bondoc’s death was not just a homicide case.

“You do not limit your investigation into finding out who did it. That’s a very shallow kind of investigation. You also need to investigate why they did it, why they are able to do it and who allowed them to do it,” said Fortun, who has filed a House resolution calling for a legislative inquiry into the incident.

Fortun said that the admission about a prevailing practice in the PMMA points to a send-off ritual that can be equated to hazing.

“If it is a hazing procedure, you don’t file a homicide case because it only has reclusion temporal as penalty, unlike death resulting from hazing, the penalty will be reclusion perpetua, it’s not bailable,” he explained.

Reclusion temporal means imprisonment from 12 to 20 years, while reclusion perpetua is from 20 to 40 years.