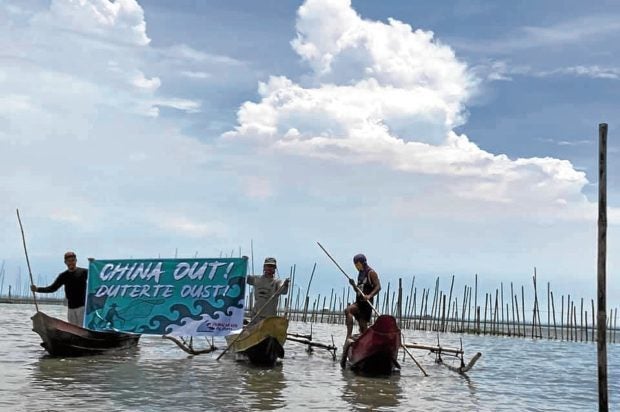 DISMAYED In a protest on June 12, Independence Day, fishermen in Botolan, Zambales, express their dismay over the way
the government is handling the territorial dispute with China in the West Philippine Sea. —PHOTO COURTESY OF PAMALAKAYA

SAN ANTONIO, Zambales, Philippines — Two vessels of the Chinese Coast Guard are permanently positioned at the mouth of the 150-kilometer-wide Scarborough Shoal (Panatag or Bajo de Masinloc to locals), preventing Filipino fishermen from entering, fishing or taking refuge in the area, local fishermen said on Wednesday.

In Masinloc town, some 220 km from the shoal, at least 1,500 fishermen have already deserted the contested territory for fear of being driven away by the two Chinese ships, fisherman Bobby Roldan told the Inquirer.

Roldan, also vice chair for Luzon of the national fisherfolk group, Pamalakaya, said this would refute the statement of presidential spokesperson Harry Roque who claimed that Filipino fishermen were lying when they said Chinese ships were preventing them from fishing in sections of the West Philippine Sea.

Roque made the remark on Monday as the country marked the fifth anniversary of the landmark ruling of the Hague-based Permanent Court of Arbitration that invalidated China’s nine-dash-line claim on the South China Sea which encroached on parts of the Philippines’ exclusive economic zone (EEZ).

He said the fishermen would always risk their lives when venturing out to sea and attempting to go near the shoal while the Chinese boats patrol the area.

Roldan challenged Roque to join them in a trip to the shoal so the official could witness how Filipino fishermen would be barred from entering their traditional fishing ground.

“That way, the patrolling Chinese Coast Guard might recognize his authority and allow us to fish there,” Roldan said in Filipino.

“There is no truth to the statement of the spokesperson of President Duterte that we have been able to resume our livelihood or regain our freedom to fish in the Scarborough Shoal,” Rony Drio, the federation’s spokesperson, said in a statement on Wednesday.

Drio detailed the difficult situation of its members who count 6,000 in the provinces of Bataan, Zambales, and Pangasinan.

According to him, hunger and poverty among their families have worsened while their debts accumulated since China “entered, occupied and controlled” parts of the West Philippine Sea. The volume of their catch outside the shoal had decreased, making them unable to finance fishing trips.

Most of them are hired as laborers or “passengers” who share the catch with large boat owners.

Drio said Filipinos fish outside the shoal because the Chinese Coast Guard had been driving them away. He said they had been banned from taking refuge in the shoal when storms or winds were strong, forcing them to leave with little or no catch at all.

Before China’s ships came, Filipinos would fill their fishing boats within days, Drio said. But today, fishing outside the shoal would take weeks for a few pails of fish. “This is why we make little income,” he said.

Those who use “payao,” a fish-aggregating device, near the shoal would go home with little catch now, Drio said. Yield in this fishing ground, he said, has decreased due to the destruction of coral reefs, which local fishermen attributed to the Chinese fishers’ use of equipment in harvesting giant clams.

“Since China entered the West Philippine Sea nine years ago up to now, we have not been able to freely fish in our country,” Drio said. “We are telling the truth because this is based on our experiences as fishermen.”