Pope Francis returns to Vatican after surgery in Rome hospital 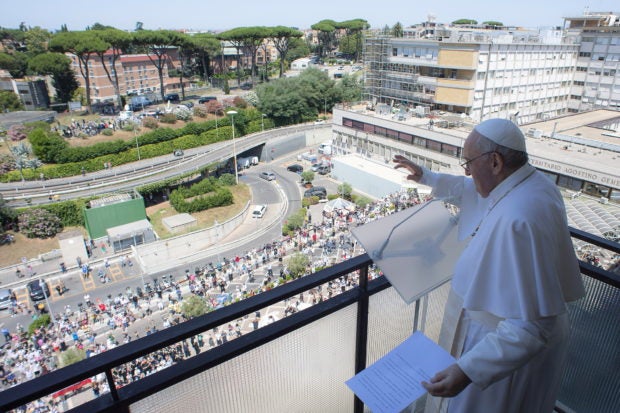 Pope Francis leads the Angelus prayer from a balcony of the Gemelli hospital, as he recovers following scheduled surgery on his colon, in Rome, Italy, July 11, 2021. Vatican Media/­Handout via REUTERS

VATICAN CITY — Pope Francis returned to the Vatican on Wednesday, 11 days after undergoing surgery at a Rome hospital to remove part of his colon.

A Reuters witness saw the pope get out of a car after it entered the Vatican gates.

Earlier, photographers at the Gemelli hospital saw two cars escorted by Vatican security leave via a side entrance shortly before 11.00 a.m. (0900 GMT) after staff had put a wheelchair in the trunk of one of the vehicles.

The first of the two cars had darkened windows.

The 84-year-old pope had part of his colon removed on July 4. On Sunday he made his first public appearance since the surgery, standing for about 10 minutes while speaking from the balcony of his suite.

On Tuesday afternoon, the Vatican released five pictures of the pope during a visit earlier in the day to the children’s cancer ward on the same floor as his suite.

They showed the pope seeming in good condition as he walked unassisted along the corridor of the ward, greeting children, parents and doctors. In pictures released on Sunday, he was using a wheelchair when he visited patients.

Francis has no commitments for the rest of the month apart from his Sunday blessing, although the Vatican is proceeding with plans for a papal trip to Slovakia and the Hungarian capital of Budapest in mid-September.

Scotland’s bishops on Monday announced that the pope will attend the United Nations Climate Change Conference (COP26) in Glasgow in November, health permitting. He is also expected to visit Malta and Cyprus later the same month.