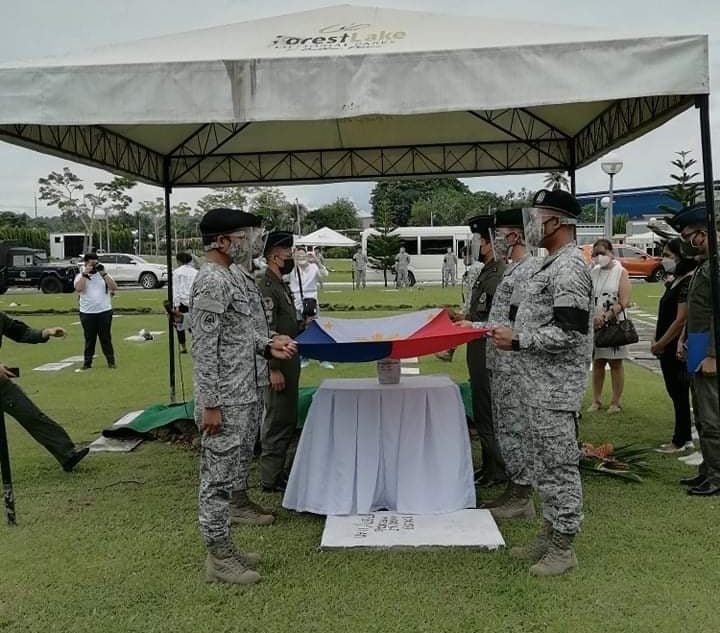 A 21-gun salute sends the 25-year old pilot First Lt. Karl Joseph Hintay of the 220th Airlift Wing of the Philippine Air Force (PAF) to his final resting place at the Forest Lake Memorial Park of Barangay Maa, Davao City. Hintay, who co-piloted the C-140 aircraft that crashed in Patikul, Sulu on July 4, was among the 49 soldiers who died. CONTRIBUTED PHOTOS

DAVAO CITY—The co-pilot of the ill-fated C-130 Hercules aircraft that crashed on July 4 in Barangay Bangkal, Jolo, Sulu, was given a 21-gun salute, when his remains were laid to rest past noon Tuesday in this city.

First Lt. Karl Joseph Hintay of the 220th AirLift Wing based in Benito Ebuen Air Base in Mactan, Cebu, was accorded military honors when he was interred Tuesday at the Forest Lake Memorial Park in Barangay Maa here.

The 25-year old co-pilot, who once gave up his dream to be a doctor to join the Philippine Military Academy, belonged to the PMA Class 2017 and spent the last four years with the Philippine Air Force (PAF).

He was one of the 49 soldiers who died when the C-130 aircraft that he co-piloted on July 4 missed the runway during its landing and crashed along the boundary village of the adjacent Patikul town.

The urn that contained Hintay’s ashes arrived here Saturday in time for his vigil and was finally put inside his resting place at 12:12 p.m. Tuesday, in a tomb just above that of the late Engr. George Hintay, his father.

On July 10, PAF said in a statement that the black box, or the plane’s flight data recorder, had been sent to the United States for analysis to shed light on what could have caused the plane crash. PAF officials said the procedure would take about a month.

The Lockheed C-130 has been PAF’s biggest transport aircraft. It was one of the two refurbished Lockheed C-130 aircraft delivered from the US Air Force to the PAF in February this year as part of the US military assistance to the Philippines.

The second unit was expected to be handed over later this year.