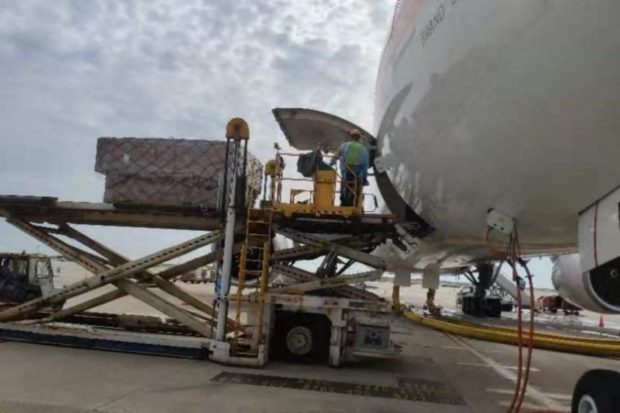 The first batch of 1,500 units is slated to arrive in Jakarta on July 13 and 14, said Temasek Foundation. PHOTO BY TEMASEK FOUNDATION via The Straits Times/Asia News Network

SINGAPORE — Businesses in Singapore and Indonesia are joining hands to support Indonesia’s fight against Covid-19, as infections there hit a new daily record high on Monday (July 12).

The Singapore Chamber of Commerce and Industry (SingCham) in Indonesia is facilitating the shipment of six tanks of liquid oxygen, oxygen concentrators and oxygen canisters to Jakarta in the coming days, SingCham vice-chairman Joel Shen told The Straits Times on Tuesday.

In the meantime, Temasek Foundation and 15 companies from both countries are donating more than 11,000 oxygen concentrators, which will be delivered over the next few weeks to Indonesia.

The SingCham initiative came after a dozen SingCham member companies from Singapore and Indonesia got together online last Saturday and tapped their vast business networks to procure medical supplies in Singapore for free or at heavy discounts.

Two Indonesian shipowners offered free container slots, and an Indonesian logistics company volunteered to arrange the collection of the supplies in Singapore and the delivery to the Indonesian authorities when these arrive in Jakarta, said Mr Shen.

SingCham chairman Shoeb Kagda said a laundry list of essentials – from beds to medicine – has been drawn up. But the focus now is to bring in oxygen, which is “desperately needed in Indonesia”.

“Collectively, we are putting all our resources together. We all live and work in Indonesia and we can play a role in terms of aiding Indonesia at this time, whatever the role is,” Mr Kagda told ST.

Mr Valkyn Clive D’Mello, an Indonesian logistics consultant and SingCham member, said the shipment will be on a weekly basis to Jakarta for now, but could become more frequent and also deliver to other ports such as Batam to support larger donations in the future.

“With the help from member companies and partners, we can keep the logistics costs low and focus on getting money spent on actual medical aid coming to the country,” he said.

Indonesia, the South-east Asian country worst hit by Covid-19, reported 40,427 cases and 891 deaths on Monday, bringing its total so far to more than 2.5 million cases and 67,355 deaths. Actual numbers are believed to be higher due to lack of testing.

The authorities extended Covid-19 restrictions to 15 new locations across the archipelago last Friday. In densely populated Java, hospitals are being pushed to the limit, oxygen supplies are low, and four of five designated Covid-19 burial grounds in capital Jakarta are running out of space.

In the separate initiative, Temasek Foundation said in a statement that the first batch of 1,500 oxygen concentrators is slated to arrive in Jakarta on Tuesday and Wednesday.

More will be progressively delivered over the next few weeks, it added.

The oxygen concentrators, which are medical-grade, non-invasive breathing aids, will be deployed by Indonesia’s Ministry of Health to hospitals to treat patients with respiratory conditions.

“This donation is made possible by the generosity of the Indonesian business community here in Singapore as well as Singapore businesses, which have been quick to render help in our collective fight against Covid-19,” said Temasek Foundation.

Both Temasek Foundation and SingCham said the Indonesian Embassy in Singapore has also been actively helping to facilitate the donations.

DBS chief executive Piyush Gupta said in a statement on Tuesday: “It is our hope that by standing together, we can overcome the worst of this pandemic very soon.”

The bank is chipping in with 1,000 of the oxygen concentrators.

Last week, Singapore – in a sign of its strong ties with Indonesia – sent two planeloads of medical supplies to the country.

The Republic has been Indonesia’s top foreign investor since 2014, with total investments valued at US$9.8 billion (S$13.2 billion) last year. Indonesia was also one of the Republic’s top 10 trading partners last year.