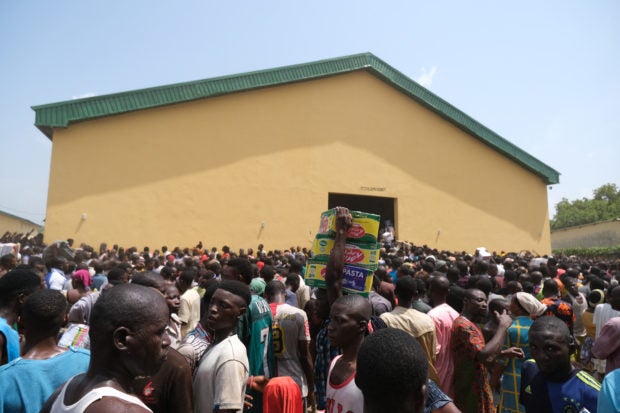 People carry bags of food on their heads during a mass looting of a warehouse that have COVID-19 food palliatives that were not given during lockdown to relieve people of hunger, in Abuja, Nigeria, on October 26, 2020. AFP FILE PHOTO

PARIS — The Covid pandemic caused an estimated 18 percent increase in the number of people facing hunger, a UN report released on Monday found, dealing a massive setback to efforts to ensure everyone has access to food.

The world was already off track to achieve its goal of eradicating hunger by 2030, but the report warned that Covid had now sent it back in the wrong direction.

The “economic downturns as a consequence of Covid-19 containment measures all over the world have contributed to one of the largest increases in world hunger in decades,” said the annual food security and nutrition report compiled by several UN agencies.

Although the full impact of the pandemic cannot yet be determined, the report estimated around 118 million more people faced hunger in 2020 than in 2019, an increase of 18 percent.

The rise in moderate or severe food insecurity was equal to the previous five years combined.

“Nearly one in three people in the world (2.37 billion) did not have access to adequate food in 2020 — an increase of almost 320 million people in just one year,” the report said.

One in 10 people were undernourished.

The increase in hunger was widespread as the economic downturn affected almost all low- and middle-income countries.

But the biggest impact was in countries where there were also climate-related disasters or conflict, or both.

More than half of the people who were malnourished lived in Asia (418 million), more than one third in Africa (282 million) and eight percent or 60 million in Latin America, the report said.

In some countries, “in particular the poorest,” measures to fight the pandemic hampered circulation and prevented subsistence farmers from selling produce on local markets, noted Dominique Burgeon, a director of the Food and Agricultural Organization of the United Nations (FAO).

Meanwhile in cities, “there were problems with supply, which meant that prices rose,” he said in comments to AFP.

According to the report: “The Covid-19 pandemic is just the tip of the iceberg.

“More alarmingly, the pandemic has exposed the vulnerabilities forming in our food systems over recent years as a result of major drivers such as conflict, climate variability and extremes, and economic slowdowns and downturns.”

The UN agencies said there is a unique opportunity to reverse the dynamic this year however, thanks to two major food and nutrition summits plus the COP26 meeting on climate change.

The report was jointly published by the FAO, the International Fund for Agricultural Development (IFAD), the United Nations Children’s Emergency Fund (UNICEF), the UN World Food Program (WFP) and the World Health Organization (WHO).

“In a world of plenty, we have no excuse for billions of people to lack access to a healthy diet. This is unacceptable,” UN Secretary General Antonio Guterres said in a statement.

“We are running out of time to make the urgent shifts we need to limit global temperature rise,” he added. “This is why I’m convening a global Food Systems Summit this September. We must come together to urgently make a change.”