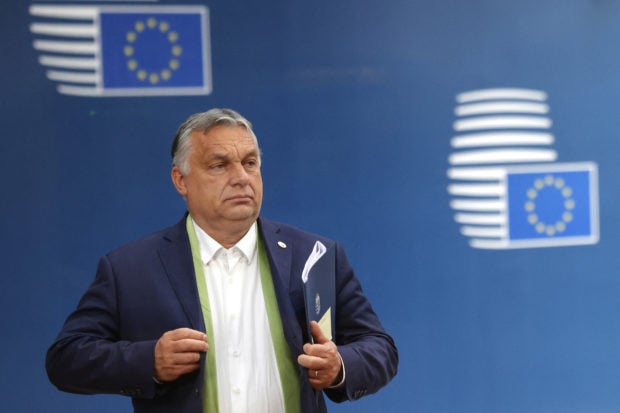 Hungary’s Prime Minister Viktor Orban leaves at the end of a two-day EU summit at the European Council building in Brussels on June 25, 2021. AFP

BRUSSELS — The European Commission on Monday missed a self-imposed deadline to grant approval for Hungary’s Covid recovery plans, saying it remained in talks with Budapest as anger simmers over an anti-LGBTQ law.

“The commission has not yet concluded its assessment of the Hungarian recovery and resilience plan,” a spokeswoman for the EU executive said.

“Should our assessments require more weeks rather than days, we will propose to Hungary to agree on an extension of the two-months deadline.”

The delay comes after Commission chief Ursula von der Leyen warned Hungary to reverse course on a controversial law that bans the “promotion” of LGBTQ issues to under-18s, as pressure mounts on Brussels to cut EU funding to Budapest.

Economics Affairs Commissioner Paolo Gentiloni on Monday told reporters he hoped that a solution was a “matter of weeks, but this of course is not depending on the goodwill of the commission.”

Gentiloni said that discussion about the recovery plan did not specifically involve the LGBTQ law even though it was “of course something that the commission, completely disapproves.”

The EU executive refused to give details on what prevented it from signing off on Hungary’s plans — submitted on May 12 — to spend 7.2 billion euros ($8.5 billion) in funding from the EU’s vast recovery package.

The commission has set itself a deadline to approve plans from the 27 member states within two months of receiving them.

Broadly speaking, discussions over the recovery funds have included questions over Hungary’s commitment to fighting corruption, and to ensuring both transparency and the independence of the courts.

Hungarian Prime Minister Viktor Orban has for years defied the EU with authoritarian laws that critics say have undermined free speech and threatened the independence of the country’s judiciary.

While he insists the latest law is a measure to protect children, critics say it conflates pedophilia with homosexuality and stigmatizes support for the LGBTQ community.

Von der Leyen last week said that law was a “disgrace” and pledged that the commission would use “its powers available” if Hungary did not fix the situation.