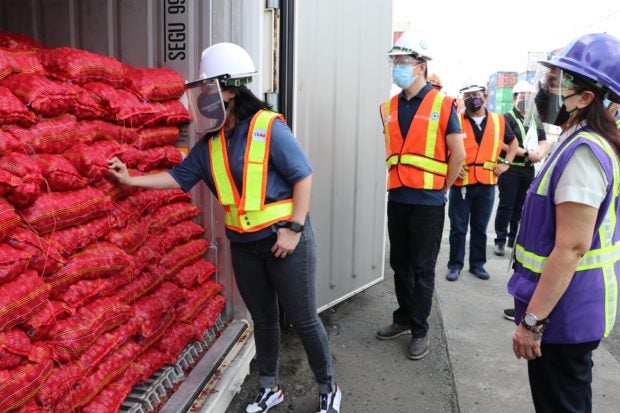 Wilma Eisma, chair and administrator of Subic Bay Metropolitan Authority, and other officials, inspect one of the 12 container vans filled with alleged smuggled onions. (Photo courtesy of SBMA)

In a statement, the Subic Bay Metropolitan Authority (SBMA) said the Bureau of Customs in the Port of Subic seized 12 container vans loaded with fresh onions.

Subic Customs Collector Maritess Martin said the shipments arrived in Subic from China and were consigned to port users Thousand Sunny, which was to receive three containers, and Dua Te Mira, which was to get nine.

But the manifest indicated that the contents of the 40-footer refrigerated container vans were frozen chapati or flat Indian bread.

Martin said the BOC decided to declare the cargo abandoned after nobody claimed it or presented proof of ownership for all or part of the shipment.

The BOC said each of the 12 refrigerated vans contained hundreds of sacks of fresh red onions worth about P2 million per van.

One of the containers had a global positioning system (GPS) tracking device.

Martin said this was the first time they found a GPS tracking devise in a container van.