At a Rio cafe, cats and coffee combine for a cause | Inquirer News
Close
menu
search

At a Rio cafe, cats and coffee combine for a cause 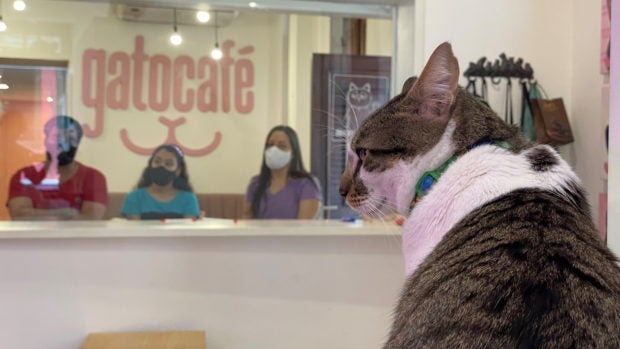 A cat is seen at the Rio cat cafe or Gato Cafe, where customers can relax while adopting a feline, in Rio de Janeiro, Brazil, July 10, 2021. Picture taken July 10, 2021. REUTERS

At the Gato Café in downtown Rio de Janeiro, coffee and tea are served with whiskers and a purr.

In its pink-walled interior, customers can purchase lattes dusted with cat silhouettes and accompanied by paw-shaped biscuits while cats lounge lazily in an adjacent room.

Cat cafés were first popularized in Asia, where they originated in Taiwan in 1998. In addition to offering feline company, Gato Café, which opened last July, simultaneously functions as an adoption site for abandoned cats rescued by an organization called Bigodes do Bunker (Bunker Whiskers).

In 2019, there were over 78 million pet cats and dogs in Brazil, according to the Brazilian Pet Institute. As owners passed away and families were thrown into disarray during the coronavirus pandemic, many animals were abandoned or left to fend for themselves.

“There are more than 10 million cats without a home in Brazil, and I think that the financial difficulties wrought by the pandemic has unfortunately increased this number,” said founder Giovanna Molinaro, who was inspired to create the café after a trip to Japan in 2018.

“There are other cat cafés in the world, but here we are focused on the adoption and well-being of our cats,” she added.

Clarissa Haiut said she was having the time of her life as she stroked a tabby with white patches.

“I’m in paradise with all of these cats. I’m in love with them! It feels like I’m living in a dream full of kittens.”