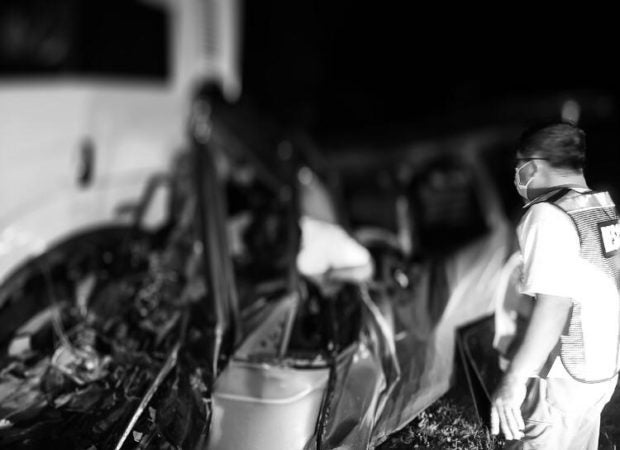 A collision between a van and a truck left six passengers dead and three others injured in Tagkawayan, Quezon Tuesday morning. Police said the van was Bicol-bound from Cavite and was carrying passengers who booked their trip online. PHOTOS FROM TAGKAWAYAN POLICE

LUCENA CITY – Six passengers of a van died and three others were seriously injured after their vehicle collided with a trailer truck in Tagkawayan town in Quezon province early Tuesday, police said.

The other van passengers, Fatima Beroin, Raymond Froibel Cortez and Joel Badiola, sustained grave injuries and are confined at the hospital.

Report said the Manila-bound truck was negotiating an uphill portion of the highway when the oncoming van occupied the opposite lane after it overtook a vehicle ahead.

The van driver lost control of the vehicle and consequently crashed into the oncoming truck.

Citing information from the survivors, Requinto said the victims paid their trip through an “online booking” of passengers.

Meanwhile, the accident site is now passable to all vehicles, police said.