Amid renewed calls to pursue the 2016 Hague ruling upholding the Philippines’ sovereign rights in its exclusive economic zone, Malacanang said it had taken ‘all the steps to give life to [that] decision.’
By: DJ Yap, Leila B. Salaverria - @inquirerdotnet
Philippine Daily Inquirer / 05:30 AM July 13, 2021 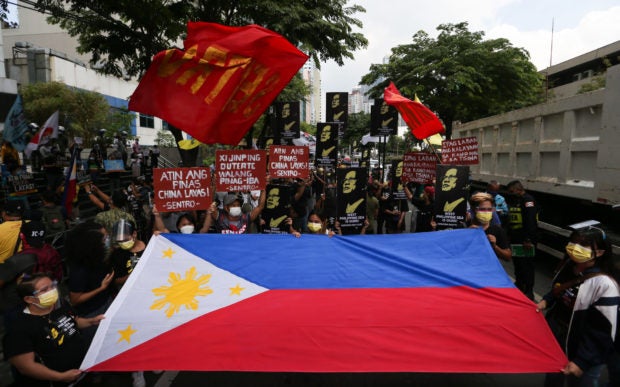 ‘THIS COUNTRY IS OURS’ Carrying a Philippine flag, several groups gather in front of the Chinese consulate in Makati City on Monday to mark the fifth year of the arbitral ruling that invalidated China’s sweeping claims in the South China Sea and asserted the Philippines’ rights to its exclusive economic zone. —LYN RILLON

MANILA, Philippines — Senators on Monday marked the fifth anniversary of the 2016 arbitral ruling that recognized the Philippines’ sovereign rights in the West Philippine Sea (WPS) by pressing President Rodrigo Duterte’s administration to “complete” the country’s legal victory against China.

But Malacañang in response said the administration had done all it could to assert the Philippines’ claim in its maritime dispute with China.

In a statement, Sen. Panfilo Lacson said the country should “see this day for what it truly is: Commemorating a hard-won battle, but a victory still incomplete. We must, therefore, press on to… complete the victory we achieved five years ago today.”

In her statement, Sen. Grace Poe said, “We should make use of our victory in the tribunal to undertake a determined, focused and unflinching defense of our maritime entitlements and jurisdiction.”

“Much is at stake in the huge maritime area that is rich in fish, oil, gas and other natural resources. Thousands of fishermen also rely on the catch area in the WPS for their food and livelihood,” Poe said.

On July 12, 2016, the Permanent Court of Arbitration in the Hague, the Netherlands, issued a unanimous decision on the Philippines’ arbitral case against China, invalidating China’s sweeping claims on the South China Sea, part of which the Philippines calls the West Philippine Sea to assert its rights to areas within its exclusive economic zone.

The case was filed in 2013 by the administration of the late President Benigno Aquino III, following China’s incursions into the West Philippine Sea and a standoff at Scarborough Shoal the preceding year.

On Monday, Senate Minority Leader Franklin Drilon filed a new resolution commemorating the fifth year of the Philippines’ victory in the Hague. This follows at least two similar measures pending in the Senate—Resolution No. 376, which Sen. Leila de Lima filed in 2019, and Resolution No. 762, which Sen. Risa Hontiveros filed on June 28.

“The Philippines’ victory at the Hague should be a lasting reminder that the Filipino is never cowed or daunted, that false promises of economic largesse and military might will not serve to defeat what is right, and that our claims should be valiantly and relentlessly fought for, to ensure that future generations can benefit from the bounty of what is legally ours,” Drilon said in filing Senate Resolution No. 769.

“We should celebrate our David against Goliath triumph on July 12 of every year, but we should insist every minute that China should recognize, respect and abide by the ruling,” Rodriguez said.

Other House lawmakers said Mr. Duterte had “squandered” the gains of the country’s arbitral victory.

“There has been a lack of recognition, especially from the President, on the merits and power of the Philippines’ win in the Hague on our maritime claims. This attitude of the administration has squandered many opportunities to strengthen our claims,” said Magdalo Rep. Manuel Cabochan III, who also has a pending bill declaring July 12 as a special working holiday to commemorate the arbitral case against China.

In his statement, House Deputy Minority Leader Carlos Zarate said there was “apparently slim, even zero, chance” that Mr. Duterte would reverse his stand on China as his term is coming to an end.

Former Foreign Secretary Albert del Rosario issued a strongly worded statement saying that, “When President Duterte admitted that he was ‘inutil’ (useless) with respect to the West Philippine Sea, the honorable thing left for him to do was to step down given his admission that he could not fulfill his sworn mandate as President.”

“Through these acts, many Filipinos have reason to believe that our President has been discrediting our nation. For the last five years, what we see is a betrayal of the Filipino people,” said Del Rosario, who served in the Aquino administration.

Retired Supreme Court Associate Justice Antonio Carpio suggested that “[t]he winning state must… forcefully assert its award” by endeavoring a global campaign to force the losing state to comply with the ruling.

“The nonnuclear armed winning state cannot expect the nuclear armed losing state to just roll over and comply upon the issuance of the arbitral award,” he said.

But presidential spokesperson Harry Roque on Monday said, “We have done all that we could, given the absence of an enforcement mechanism under international law.”

“Since there is no police to enforce it, the government took all the steps to give life to the decision, including the President’s speech before the UN General Assembly [in September last year when] he said the arbitral decision is part of international law,” Roque said in his press briefing.

He said while the arbitral tribunal addressed the maritime issue with China, the territorial dispute continues.

He maintained that the conflicting territorial claims had yet to be resolved, but said this would be set aside as the government focuses on trade, investments and other matters. —WITH REPORTS FROM TINA G. SANTOS AND NESTOR A. CORRALES