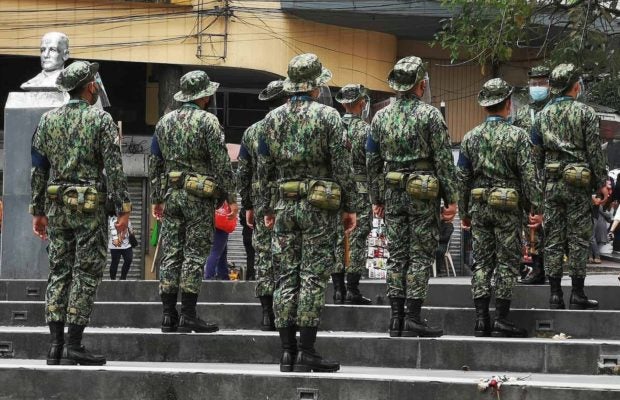 DUTY CALLS Police officers line up for inspection before proceeding to their patrol areas in downtown Baguio on Monday. Some senior police officers taking a leadership course at a Baguio training school have been infected with the disease. —EV ESPIRITU

BAGUIO CITY, Benguet, Philippines — Mayor Benjamin Magalong has asked the Philippine National Police to stop its training in this city following the surge in COVID-19 infections among its noncommissioned officers (NCOs) in the past weeks, a police official said on Monday.

Lonogan said the mayor was concerned over the large number of cases involving policemen and was alarmed over the presence of the more contagious COVID-19 variants in the city.

As of July 9, the COVID-19 variant cases here have reached 57, of which 53 were afflicted with the Alpha (United Kingdom) variant. The other four patients were stricken with the Beta variant, once called the South African strain.

The PNP’s leadership training program is part of the officer candidate course (OCC) that is mandatory for the promotion of senior NCOs to police lieutenants, Lonogan said.

“We are awaiting instructions from [the PNP headquarters in Camp Crame] regarding the closure of ongoing programs at CARTC,” he said. CARTC is supervised by the Philippine Public Safety College.

In the last week of June, about a hundred police staff sergeants and other NCOs, who were supposed to stay within a training bubble at Teachers’ Camp, caught the disease. CARTC administrators were forced to quarantine all 197 NCOs who were to graduate on the same week.

It was the second time a big group of police officers had contracted COVID-19 in Baguio. In October last year, 124 policemen from a group of 437 trainees were confined at their barracks after getting the virus.

On Sunday, Magalong was informed that 26 more police NCOs had tested positive for the virus between June 25 and July 11 while pursuing the same course at CARTC’s Santo Tomas facility, the Baguio information office reported.

Like the protocol at Teachers’ Camp, more than 80 police NCOs at the Santo Tomas annex were not supposed to leave the premises until the end of training “but some of the police officers there were allowed to attend to duties outside the training grounds, like court hearings,” Lonogan said.

This would explain why there were transmissions there, he added.

The NCOs from Baguio and Benguet were among the latest batch of candidates for promotion. —VINCENT CABREZA