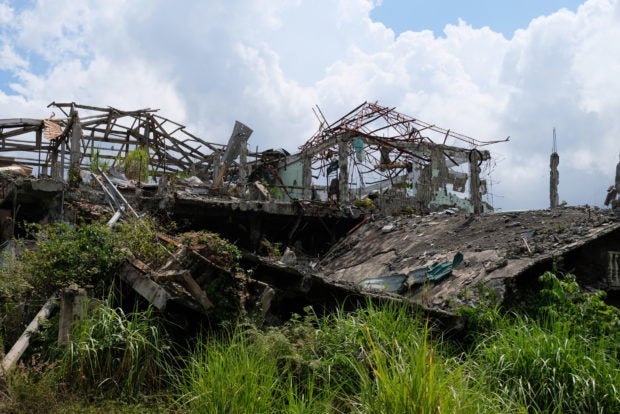 IN RUINS Some of the structures destroyed at the ground zero of the five-month siege staged by Islamic State-inspired militants in Marawi City in 2017. —BONG S. SARMIENTO

KORONADAL CITY, South Cotabato, Philippines — A group of residents of Marawi City have decried the government’s decision to allegedly “sequester” without their consent at least 16 hectares of their land in four villages inside the ground zero of the 2017 siege in the city.

Lawyer Ibrahim Mimbalawag, a resident of Marawi and one of the affected landowners, said residents could no longer return to the four villages — also part of the so-called most affected area (MAA) in the 2017 fighting, as the National Housing Authority (NHA) and the Marawi local government unit (LGU) had allocated the area for infrastructure projects to rehabilitate the country’s lone Islamic city.

Mimbalawag, who claimed to represent 11,000 individuals directly affected by the ongoing rehabilitation, said over the weekend that they were not notified when the state sequestered their lands.

“That’s land grabbing. It’s private land and we have titles and documents. There was no consultation made,” Mimbalawag said over the local radio.

“Haharangin namin ito (We will block this) … We will file a legal action in the court,” Mimbalawag said over the local radio.

He said his family first found out about the status of their land in Barangay Datu sa Dansalan when his sister tried to pay the real property taxes.

“She was told that they would no longer collect taxes because our property inside the MAA was covered by the government’s rehabilitation projects,” Mimbalawag said.

On July 1, Mimbalawag, his mother, and sister went to the Task Force Bangon Marawi (TFBM) to clarify the status of their land but were referred to the NHA and the Marawi LGU.

At the NHA’s office in the city, they were told that the four villages would be utilized for the building of government rehabilitation projects, such as convention center, grand “padian” and promenade, among others, the lawyer said.

Mimbalawag said they were shocked when told by an NHA personnel that residents of the four villages could no longer go back to their titled lots to rebuild their houses because of the government rehabilitation projects.He appealed to the NHA and the Marawi LGU to build the rehabilitation projects in vacant lots in the city and not on their properties.

Jalilah Sapiin, a member of Marawi Reconstruction Conflict Watch (MRCW), said land rights had been a contentious problem in the rehabilitation of Marawi because it had not been addressed from the start and was made worse by the “discrepancies in the data of the NHA and the LGU.”

“Everything that is happening there is an insult to the people,” said Saripada Pacasum Jr. of MRWC, a group keeping track of the rehabilitation’s progress.

“It affects the majority. We feel the pain of the people that’s why we are doing this,” Pacasum added.

For years after the end of the fighting, many of Marawi’s displaced residents have been frustrated over stymied efforts to rebuild their homes.

Jorge Golle, senior program officer for digital information and mapping at International Alert-Philippines, an independent peace-building organization, said the number of land titles affected would depend upon which map the government used in ironing out the boundary issue of the area.

He said the four villages were located along Lake Lanao and served as the “last battleground” between the military and the Islamic militants during the five-month war four years ago.

Mimbalawag said they were not consulted when the government decided to use their land for development projects. He said several residents had land titles to prove ownership.

Human Settlements and Urban Development Secretary Eduardo del Rosario, who chairs the TFBM, however insisted consultations were made and the allegations raised by Mimbalawag were “unfounded and deceitful” because “titled and nontitled properties occupied by residents will be given back to them by the government.”

The TFBM profiles all land properties inside the MAA to identify the legitimate landowners and the boundaries of each property, a report posted at the Bangon Marawi website in April 2019 said.

As of April 2021, Del Rosario said 60 percent of the rehabilitation efforts in Marawi, which went full blast in July last year amid the COVID-19 pandemic, had already been finished.

The TFBM, which is composed of 56 government agencies, is “on track to complete Marawi’s rehabilitation on target in December 2021,” said Del Rosario in a statement.

President Duterte earlier promised to develop the city ravaged by the five-month battle in 2017 between militants aligned with the Islamic State and government troops.

But as of January this year, 17,555 families or 87,775 individuals remained displaced and longing to go home, according to the Office of the United Nations High Commissioner for Refugees.