‘Not worth it’: LA restaurants boost pay to lure wary workers 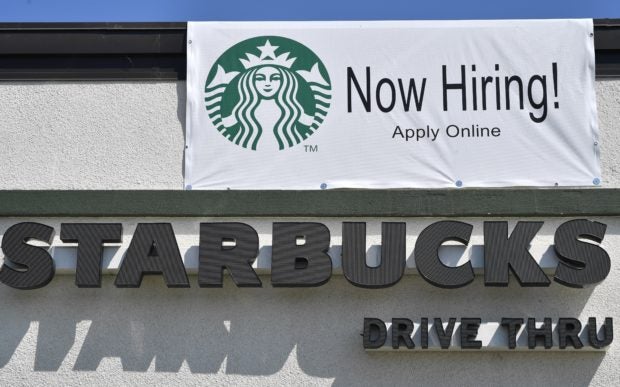 In this file photo taken on July 07, 2021 A “Now Hiring” sign is displayed outside a Starbucks coffee shop in Glendale, California. AFP

LOS ANGELES — Businesses have reopened in Los Angeles and elsewhere in the United States, with “We’re hiring” signs everywhere. But if life has a pre-Covid feel, a new challenge has arisen for restaurants: workers are not willing to return at any cost.

“We are dealing with a staffing shortage that I have not experienced in my career,” said Skyler Gamble, a manager at Acme Hospitality, which oversees several restaurants in Santa Barbara around two hours’ drive north of Los Angeles.

“Our experience in the last six to nine months as business levels have rebounded, is that fewer and fewer candidates respond to job postings.”

The hospitality industry was slammed by coronavirus and pandemic-related restrictions, shedding millions of jobs.

But any restaurateurs counting on a return to normal have experienced a rude awakening.

Classified ads abound on the internet — waiters, cooks and bartenders are in high demand.

But in a major shift in power, employers wanting to land a qualified worker increasingly have to stand out from the crowd.

Craig Martin, who owns Cafe 50’s on Santa Monica Boulevard in Los Angeles, has to replace a cook. Faced with a lack of applications, he is offering a $2,000 hiring bonus — $500 per month over four months.

Like many who are trying to hire, Martin blames pandemic-related unemployment benefits for the apparent labor shortage.

Many former service industry employees are “not even thinking to look for jobs,” he said.

The reality is more complex, said Enrique Lopezlira, director of the low-wage work program at the UC Berkeley Labor Center.

Employers complaining about the market should acknowledge that they are simply unable to find workers “at the wage and quality of job” they are willing to offer, he said.

Many hospitality workers do not receive paid sick leave or health care benefits, and are “still not willing to come back into the labor force because they still feel very much at risk of the virus,” particularly with Covid variants spreading, he said.

The issue of childcare, especially during the summer months, is also affecting women’s return to the workplace.

For University of California Berkeley economist Sylvia Allegretto, there is “definitely not a worker shortage.”

“But employers find it strange that workers are taking their best options as the economy opens up and not rushing back to the lowest paying jobs with low to no benefits,” said Allegretto.

Before the pandemic, Kenzie McMillan worked as a waitress at a Hollywood restaurant.

Overnight in March 2020, she lost her job with “no heads up, no warning,” and without compensation.

When her former boss called in June last year asking her to return, she said no. Going back to work would have meant losing her unemployment benefits, and she feared passing the virus to a housemate who has an autoimmune disease.

“It’s not worth it, again I wasn’t getting paid enough,” said the 27 year-old, who did not get medical insurance at the restaurant job, and was getting “tired” from the physical demands of the work.

For Allegretto, it is clear that employers are going to have to “up their game to compete for workers.”

Both Acme Hospitality and Martin — of Cafe 50’s — said they have increased their wages.

But it is “hard to forecast” whether the improved pay and benefits currently on offer in many establishments will remain once the economy fully recovers, which is not likely until late next year, said Lopezlira.

“The whole workforce has changed,” said McMillan, who sees parallels with the #MeToo movement.

Women were exploited “for so long until they were like, ‘oh, actually I don’t have to do this and I can actually say no,'” she said.

McMillan found a new job in April, at a trendy Hollywood hotel, where she is paid $17.50 an hour and finally has medical insurance.

“We’ve realized that we don’t actually have to be abused at work,” she said.