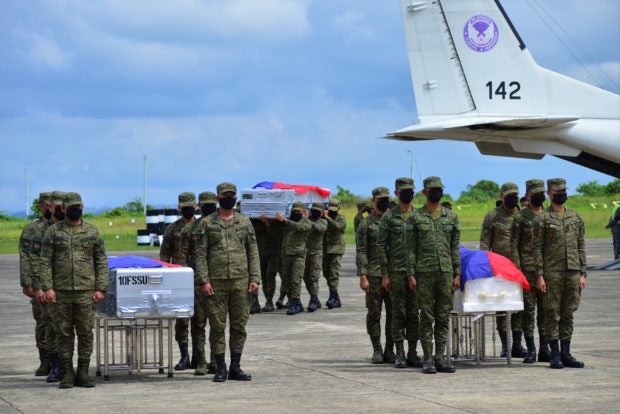 Members of the Philippine Army’s 4th Infantry Division carry the flag-draped metal caskets of the six soldiers who died during the C-130 crash in Sulu on Sunday. Their remains arrived to full military honors at the Lumbia airfield in Cagayan de Oro City on Wednesday, July 7. (Jigger Jerusalem)

DAVAO CITY—The co-pilot of the ill-fated Philippine Air Force C-130 aircraft that crashed in Patikul, Sulu on July 4  gave up his dream to be a doctor to enter the Philippine Military Academy (PMA).

First Lieutenant Karl Joseph Hintay, of PMA Class 2017, was a BS Biology student at the University of the Philippines-Mindanao in 2012 when half way through the second semester, he took both entrance exams of the PMA and the Philippine National Police Academy.

He passed both and chose to enter the PMA. 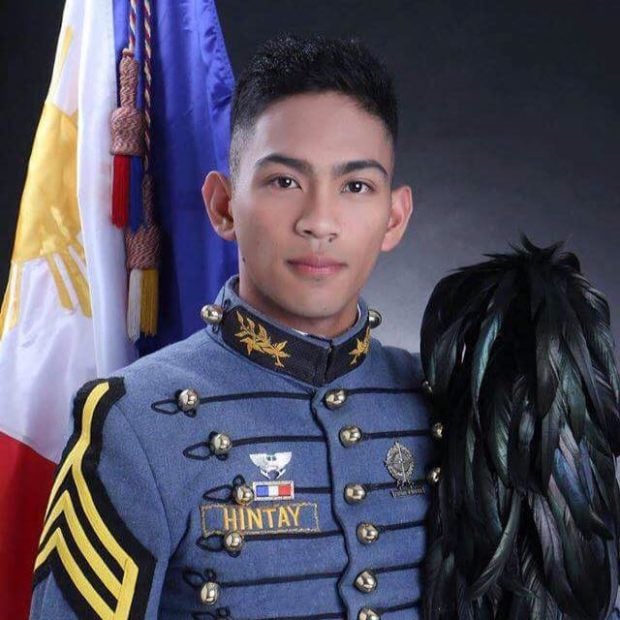 The aircraft overshot the runway and crashed in Sitio Amman, Barangay Bangkal in Patikul, Sulu.

Hintay’s body was recovered from the crash site.

Dr. Daisy Diwara Hintay, the co-plilot’s mother, and Katherine Diwara Hintay, his sister, said they only confirmed his death at 9 a.m. on July 5, when she got a call from a certain Lt. Peñaflor of the Air Force’s 220th AirLift Wing, the unit based in the Benito Ebuen Air Base in Mactan, Cebu where Hintay is based.

“We last saw him in January this year,” Katherine recalled.

“He spent his vacation with us. He was happy hanging out with friends, spending time with us and just sleeping. He was happy with that,” she said, remembering the brother, who used to be an athlete from elementary to high school, a frequent figure in the Palarong Pambansa swimming competitions, proudly representing Panabo City.

“He told us Karl’s body was in Zamboanga City already, for confirmation, for forensic. I asked them, can we place Karl in a casket but they said he could no longer be recognized, so we have to cremate him,” Dr. Hintay said.

He said her only wish for her son was to have a proper and decent wake and burial.

“He deserves it,” she said.

“Maybe he was still trying to save those soldiers. He was still strapped in his seat. He really gave his true service to the military,” she said.

“Maybe, he’s being fetched by his Dad,” she said, referring to Hintay’s father, whose death anniversary would be on July 11. 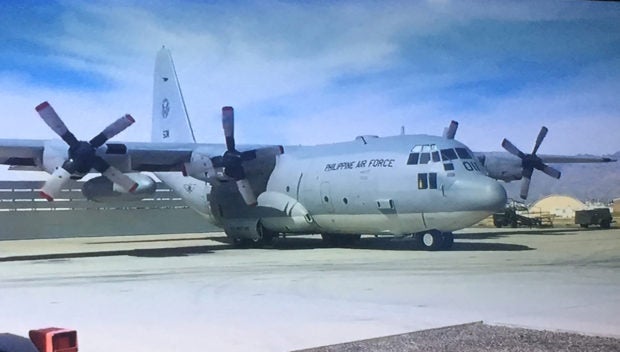 The grieving mother described her son as a “very kind person, intelligent, a gentleman who never hesitates giving favors.”

“We have our scheduled weekend video call ritual. It was last Friday (July 2) when I called him. The usual video call. I told him, ‘Karlo, do not forget your COVID-19 vaccination.’”

She said she reminded Karl about his vaccination because he was tested positive for COVID-19 in April. She said he told her he was tired and had to sleep early because he had a flight the following day.

“He said he was scheduled for vaccination in the last week of July until this happened,” she said, referring to the morning of July 4, when the C-130 that her son co-piloted crashed.

“I was supposed to call him (that) Sunday night.”