G20 to push for more vaccine sharing, but no firm commitment 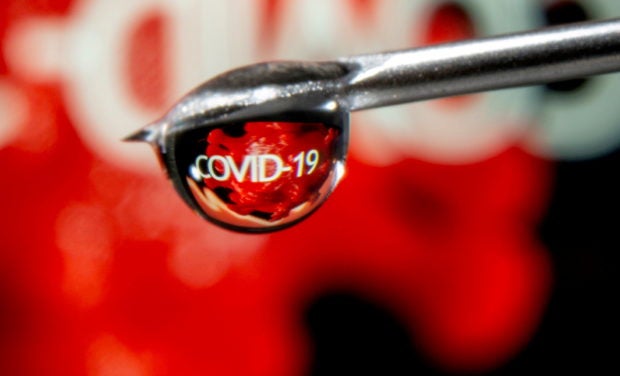 FILE PHOTO: The word “COVID-19” is reflected in a drop on a syringe needle in this illustration taken November 9, 2020. REUTERS/Dado Ruvic/Illustration

VENICE — Finance ministers of the world’s 20 largest economies are set to urge faster distribution of COVID-19 vaccines, drugs and tests across the world, but are not making new firm commitments, according to the latest version of a joint communique.

The document, seen by Reuters, is set to be released on Saturday without changes at the end of a two-day G20 meeting under way in Venice, two officials familiar with the talks said.

Ministers remain determined to bring the pandemic under control “everywhere as soon as possible”, the document says. But the G20 does not make any new firm commitment on donations of vaccines and financial support to a program co-led by the World Health Organization (WHO) for the equitable distribution of COVID-19 vaccines, drugs, tests and medical tools.

Ministers are set to agree that the WHO’s program, known as Access to COVID-19 Tools Accelerator (ACT-A), is a key tool to combat the pandemic.

They are urging the public and private sectors to address the remaining gaps in the program “including through the equitable global sharing of safe, effective, quality and affordable vaccine doses,” the document says.

It also says finance ministers will “prioritise acceleration of the delivery of vaccines, diagnostics and therapeutics”.

In documents shared before the meeting with the G20 presidency, which is currently held by Italy, the WHO said that the ACT-A still needs nearly $17 billion to meet its targets for this year, which is about half of its original request.

Most of the money is needed for the supply of COVID-19 tests and personal protective equipment, such as face masks, to poorer nations, the documents seen by Reuters say.

Almost all the money requested for vaccine procurement has now been pledged, but production problems and the unequal distribution of vaccines have left many poorer countries with very few doses – in many cases not even enough to vaccinate healthcare workers and the most vulnerable.

The United States, the European Union and other wealthy nations have made pledges to donate hundreds of millions of vaccines that they have already secured, but the WHO says many more are needed.

COVAX, the vaccine pillar within the ACT-A, has so far delivered about 100 million doses to a total of over 130 countries. Its goal is to distribute 2 billion doses by the end of the year.

G20 nations have been asked to contribute $27 billion to the funding of ACT-A, of which 51% has already been pledged, one of the WHO documents says.

The requests were calculated based on the G20 member states’ economic power, but the pledges vary significantly.

Germany, Canada and Saudi Arabia have already offered more than they were asked for.

The United States, Britain and Italy have pledged around two-thirds of what was requested, but France has so far promised only 25% of what it was asked for, while China and Russia have made no financial commitment at all.

Read Next
‘Bigtime’ drug pusher killed in Naga City buy-bust
EDITORS' PICK
A delightful blessing!
Gov’t plans to open COVID-19 vaccination for 5- to 11-yr-olds by January 2022
Gov’t eyeing COVID-19 vaccine booster for essential workers, indigents by Dec. 10
Villar Group gears up for AllValue Shopping Party on Dec. 3; around P 1-million promos and discounts up for grabs
Omicron variant detected in more countries as scientists race to find answers
Legarda: Ending Violence Against Women, a cause for all
MOST READ
Quiboloy warns of ‘much worse than Omicron virus’ if his ‘persecution’ is not stopped
Marcoleta defends pol ads on ABS-CBN
MMDA: Number coding during afternoon rush hours back this week
PH updates ‘red list,’ travel ban imposed on 7 more countries
Don't miss out on the latest news and information.