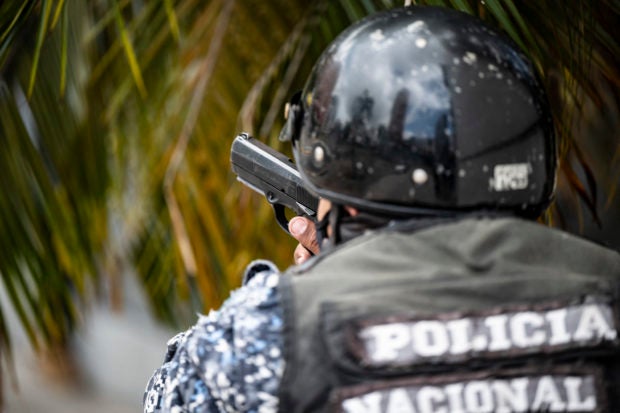 A member of the Bolivarian National Police takes position during clashes against alleged members of a criminal gang in the surroundings of La Cota 905 neighborhood in Caracas, on July 8, 2021. – A new clash between police and criminal gangs has been taking place in the Venezuelan capital since Wednesday, resulting in at least four deaths, most of them from stray bullets, according to local media. (Photo by Yuri CORTEZ / AFP)

Caracas, Venezuela — Authorities in Venezuela issued search warrants and offered rewards Thursday of up to $500,000 for gang bosses fueling deadly clashes between armed bandits and security forces in the capital Caracas.

The biggest rewards were for three criminal leaders known by their aliases of “Koki,” “El Galvis,” and “El Vampi,” while others had prices of between $20,000 and $50,000 placed on their heads.

Koki, real name Carlos Luis Revete, is a leader of the gang Cota 905, one of several involved in a fresh outbreak of running battles with police in the poorer neighborhoods of Caracas since Wednesday.

Local media say a dozen people have been killed, including a number of bystanders.

Venezuela, once a wealthy oil-producing nation, is in its fourth year of hyperinflation and its eight-year recession.

It is one of the most violent countries on Earth, with heavily armed gangs rife in poor neighborhoods.

The rewards offered are astronomical sums in a country where the monthly minimum wage is about $2.50 — not enough to buy a kilogram (2.2 pounds) of meat.

In 2020, Venezuela registered 12,000 violent deaths, according to the Venezuelan Violence Observatory. This is a rate of 45.6 per 100,000 inhabitants — seven times higher than the global average.