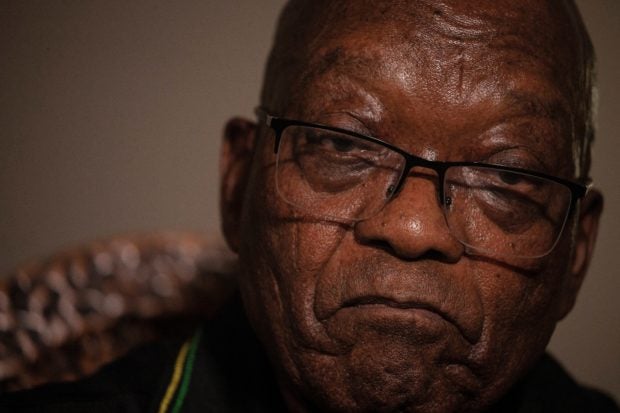 (FILES) In this file photo taken on July 04, 2021 Former South African president Jacob Zuma addresses the media in his home in Nkandla, KwaZulu-Natal. – South Africa’s ex-president Jacob Zuma handed himself in to police late on July 7, 2021, to begin serving a 15-month sentence for contempt of court, his foundation said. (Photo by Emmanuel Croset / AFP)

Johannesburg, South Africa — After days of drama and suspense before handing himself in, South Africa’s Jacob Zuma began a 15-month sentence for contempt on Thursday, after spending his first night in jail.

The former prisoner of the apartheid regime had kept the country on tenterhooks by trying all legal avenues to evade jail, but Zuma became an inmate once again shortly after midnight.

It is the first time a former president has been jailed in post-apartheid South Africa.

He handed himself in at a recently renovated jail in the small mining town of Estcourt in his KwaZulu-natal home province.

The sentence handed to Zuma by the Constitutional Court last week for snubbing anti-graft investigators also set a benchmark for the continent in jailing a former head of state for refusing to respond to a corruption probe.

Many South Africans hailed Zuma’s incarceration as a watershed moment that would strengthen the rule of law in the country.

Former corruption buster and ex-ombudswoman Thuli Madonsela hailed it as a “glorious day, in that it says that the rule of law prevails”.

If he had not gone to prison, “it would have sent shock waves to the system,” she said on public television on Thursday.

The day before, police had warned they were prepared to arrest Zuma by a midnight deadline to enforce the ruling unless the top court instructed otherwise.

But in the end, the former leader decided to comply.

Just minutes before the deadline expired, his foundation tweeted that Zuma had “decided to comply with the incarceration order” and hand himself to a correctional facility.

This is the second time Zuma, democratic South Africa’s former president — after Nelson Mandela and Thabo Mbeki — has been in prison.

He spent 10 years in jail on the notorious Robben Island for his role in the armed struggle against the apartheid system.

In a tweet, Zuma’s daughter, Dudu Zuma-Sambudla, said that her father had jokingly said on his way to prison “that he hopes they still have his same overalls from Robben Island.”

Zuma had earlier in the week mounted last-ditch legal defense and refused to turn himself in.

On Wednesday, he then pleaded anew with the court for an 11th-hour reprieve, requesting that it suspend its arrest orders until all legal processes were finalized — under the ruling, police were given three days to arrest him if he failed to surrender.

Zuma’s first application to halt his arrest was heard on Tuesday, but the judgment was reserved until Friday.

Separately, he has pleaded with the Constitutional Court to reconsider and rescind its jail order.

That challenge will be heard next Monday.

Zuma, 79, was forced out of office in 2018 and replaced by Cyril Ramaphosa after a nine-year tenure stained by corruption scandals and the taint of cronyism.

Critics nicknamed him the “Teflon president” for his perceived ability to sidestep justice.

But his fortunes changed on June 29 when the court issued its damning judgment against him for contempt.

Zuma had refused to obey a court order to appear before a commission probing the siphoning-off of state assets under his presidency.

At the weekend he defiantly declared he was prepared to go to prison, even though “sending me to jail during the height of a pandemic, at my age, is the same as sentencing me to death.”

Despite his tarnished reputation, the former president carries substantial weight among officials and grassroots members of the ruling African National Congress.

The former herdboy was the ANC’s intelligence chief during the armed struggle against apartheid was deputy president before ascending to the country’s top job in 2009.

Despite its internal tensions and divisions, the ANC said it would not interfere with the judiciary processes enveloping Zuma.

Zuma has also been accused of involvement in a bribery affair dating back more than 20 years.

He faces 16 charges of fraud, graft, and racketeering relating to a 1999 purchase of fighter jets, patrol boats, and military gear from five European arms firms for 30 billion rand, then the equivalent of nearly $5 billion