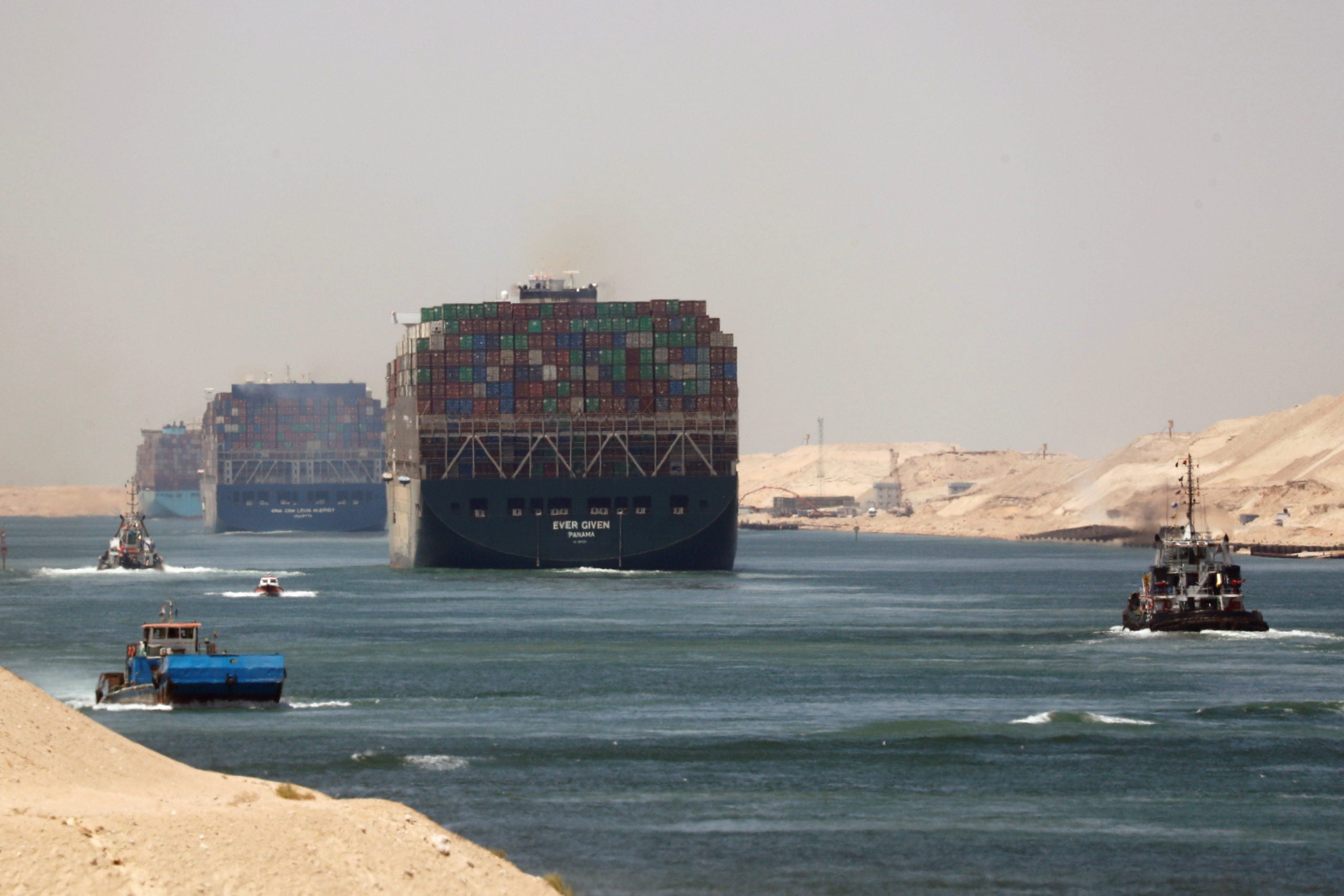 Ever Given, one of the world’s largest container ships, sets sail to leave through Suez Canal after the canal authority reached a settlement with the vessel’s owner and insurers, in Ismailia, Egypt, July 7, 2021. REUTERS/Amr Abdallah Dalsh

ISMAILIA, Egypt — The Ever Given, one of the world’s largest container ships, resumed its journey and left the Suez Canal on Wednesday, 106 days after becoming wedged across a southern section of the waterway for nearly a week and disrupting global trade.

The Ever Given started to head north in the late morning across the Great Bitter Lake, which separates two sections of the canal and where it had been moored with its Indian crew since being refloated on March 29.

It then joined the back of a northbound convoy, passing the site of a ceremony where the Suez Canal Authority (SCA) and representatives for the ship signed the compensation settlement that allowed its release.

The ship was due to undergo a dive inspection of its hull in Port Said, at the northern end of the canal, before sailing to its next port to discharge cargo.

By early evening, ship tracking data showed the Ever Given just north of the canal, off Port Said.

“May God let it arrive safely,” Tarek Alzeki, captain of a tug boat carrying reporters, said as the ship set off. “It is a beautiful thing … we are happy, of course.”

The 400-metre (1,310-foot) vessel is loaded with about 18,300 containers. Egyptian TV showed the captain and another crew member being presented with a bunch of flowers and a plaque onboard the ship.

“We hope that these Indian seafarers come back to India very soon,” said R P Veetil, general secretary of the Sailors Union of India, adding that they exemplified crew who get stuck amid legal disputes.

The Ever Given became grounded on March 23 in the southernmost, single-lane stretch of the canal, one of the world’s busiest waterways, as high winds buffeted Egypt.

After being dislodged, it was held by the SCA under court order while the authority sought compensation from the ship’s Japanese owner Shoei Kisen and its insurers.

“We regret the impact that the voyage delay has had on those with cargo stuck onboard,” Shoei Kisen said in a statement.

“Throughout this matter, every effort has been made to minimize the delay and to secure the release of the vessel as quickly as possible.”

The SCA demanded more than $900 million for the salvage operation to free the Ever Given and other losses, later lowered to $550 million. The Ever Given’s owners and insurers had disputed its detention and the compensation claim.

After protracted negotiations, an undisclosed settlement between the parties was reached and the SCA announced that the ship would be released.

The agreement stipulated that neither party would make further claims, SCA Chairman Osama Rabie told reporters on Wednesday. He said the settlement comprised a lump sum and that some of it remained to be paid this month.

The SCA was committed to keeping the terms of the agreement confidential, said Khalid Abubakr, a lawyer for the authority.

Yukito Higaki of Imabari shipbuilding, of which Shoei Kisen is a subsidiary, thanked the SCA in a recorded statement.

“Our company has a large fleet of ships and will continue to be a regular and loyal customer of the Suez Canal, which in our view remains an indispensable asset for international maritime trade,” he said.

About 15% of world shipping traffic transits the Suez Canal, the shortest shipping route between Europe and Asia. It is an important source of foreign currency for Egypt.

“There are many lessons to be learned from the in-depth inquiry still underway, but we are pleased to see the Ever Given sailing again,” said Guy Platten, secretary-general of the International Chamber of Shipping.

“The Ever Given incident shines a light on the importance of shipping to the global supply chain and the vital role that seafarers play in supporting the 14 trillion USD worth of trade each year.”

In the wake of the Ever Given’s grounding, the SCA has accelerated a plan to widen and deepen the southernmost section of the canal, and to extend a second lane further north that was built in a 2015 expansion.

Rules for ships going through the canal in difficult weather conditions will not change, the SCA’s Rabie said.