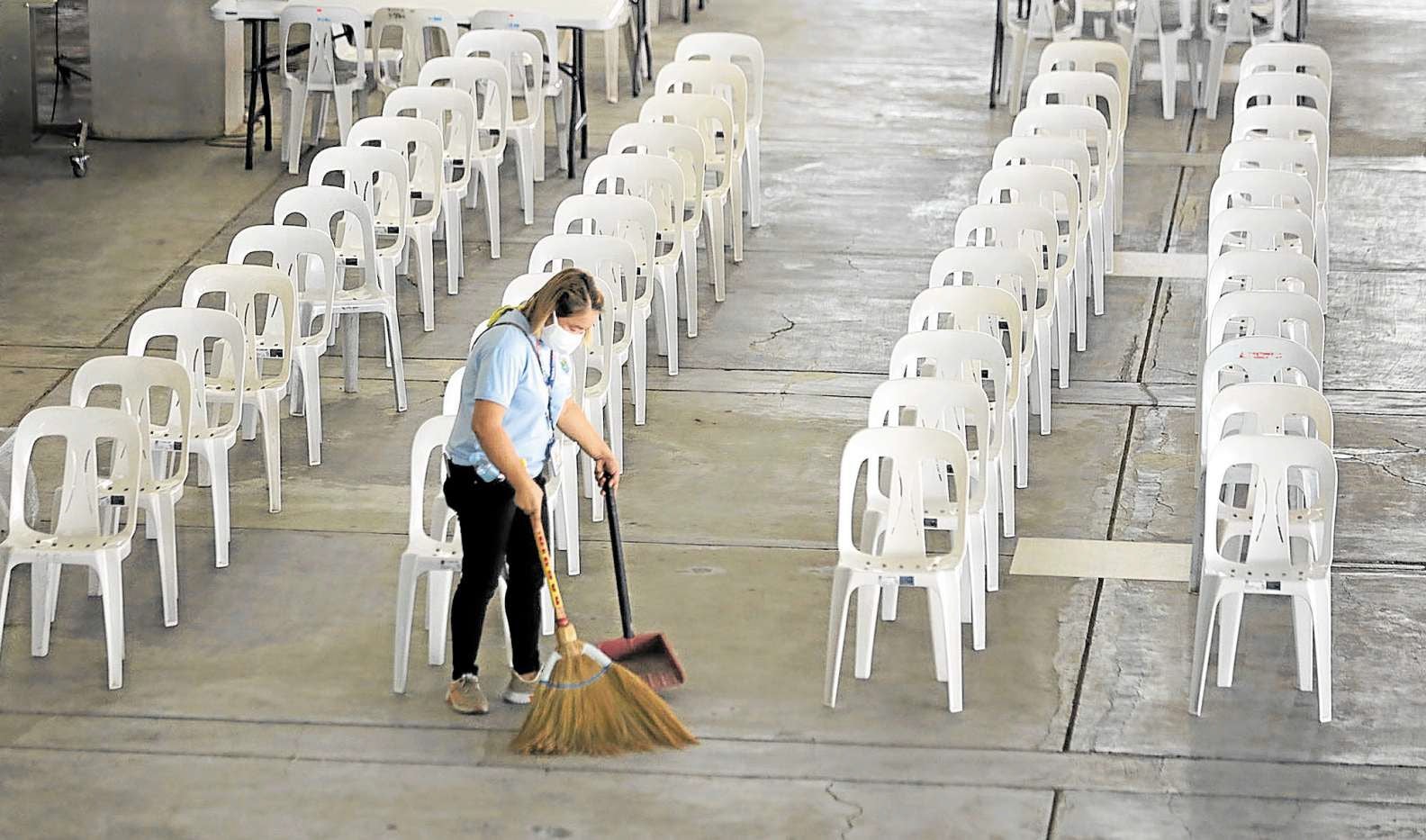 TILL NEXT DELIVERY Chairs stay empty at Marikina City Sports Center, now repurposed as a megavaccination site, after the local government suspended its COVID-19 inoculation program on Wednesday as supply ran out. The national government has apologized again for the delay in shipments coming from abroad. —GRIG C. MONTEGRANDE

He attributed the setback to the manufacturers’ practice of preparing the jabs on the first week and conducting an inventory and redeployment on the last week of the month, or two weeks wherein manufacturers do not usually ship vaccines.

“We ask for forgiveness because we cannot stop the delay in the deliveries that slowed down our rollout,” Galvez said during the Cabinet briefing.

The latest delay was the delivery of 170,000 doses of Sputnik V yesterday, affecting the second dose of some 150,000 vaccinees who had their first jab from May to early June. No new date for the shipment of the Russian vaccine was given by the task force. The Philippines received 150,000 doses of Sputnik V on May 30 and June 11.

The country’s lean supply, however, is expected to be boosted by donations from Japan and the United States this month.

In August, the Philippines will receive 14.17 million doses of Sinovac, Pfizer, AstraZeneca, Moderna and donations from the COVAX facility.

The Food and Drug Administration (FDA) said it was studying Sinovac’s application to amend the emergency use authorization (EUA) for its vaccine.

“This is another potential vaccine that can be used for the pediatric age group,” FDA Director-General Eric Domingo said in the Cabinet briefing on Tuesday night. The FDA’s decision is expected within a month.

The FDA’s EUA for CoronaVac allows its use only for individuals age 18 and above. Last June, China approved the use of CoronaVac on those age 3 to 17.

Pfizer-BioNTech’s COVID-19 vaccine is the only one allowed so far by the FDA to be used for children 12 years and older.

The country’s experts are also studying the possible mixing of vaccine brands and the use of booster shots to improve immunity.

Domingo added that the vaccine experts panel has approved an extension in the gap between the two doses of the Sputnik V vaccine from 21 days to 42 days. Russia’s Gamaleya Research Institute initially sought to amend its EUA to increase the interval between the first and second doses up to 90 days.

As to Novavax, the FDA said it was still waiting for the US-based company to apply for an EUA for its COVID vaccine.

Aside from delayed shipments, another problem in the vaccination program has been the low turnout of seniors at vaccination sites.

Despite being the second-highest priority group, less than 10 percent of senior citizens in the country have been vaccinated, a member of the interim National Immunization Technical Advisory Group (iNITAG) said on Wednesday.

In a town hall meeting, iNITAG member Nina Castillo-Carandang cited data from the National Vaccination Operations Center showing that 739,519 or 8.9 percent of seniors, or those in the A2 priority group, have been fully vaccinated.

Only 29.32 percent of them or 2.4 million have gotten their first dose, Carandang said. The government targets to vaccinate 8.2 million senior citizens.

Senior citizens, or those 60 years and older, are among the most vulnerable to COVID, but Carandang said a lack of information on vaccines and their benefits could be a factor in their low turnout.

On Wednesday, the Department of Health (DOH) said it recorded 4,289 new COVID infections, bringing the country’s total to 1.45 million.

In its daily case update, the DOH said there remained 47,519 active cases, of which 90.4 percent were mild cases.

The DOH said another 6,399 people have recovered from the illness, bringing the number of survivors to 1.38 million. However, another 164 have died, raising the total number of deaths due to COVID-19 to 25,429.

It was the second day in a row that the DOH logged more than a hundred daily deaths.

Four laboratories failed to submit their data on time, the DOH said, adding that it removed 11 duplicates from the total case count. —With reports from Maricar Cinco and Patricia Denise M. Chiu INQ