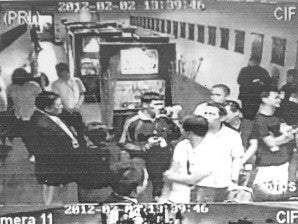 BUT WHERE IS SHE? House prosecutor Representative Reynaldo Umali is caught on the Senate CCTV being interviewed by the media in this still-frame shot taken at 1:39 p.m. on February 2. SENATE CCTV

The prosecution’s “small lady” is apparently so tiny that she can’t be seen in the closed-circuit television (CCTV) videos of the Senate.

In a report to Senate President Juan Ponce Enrile, a copy of which was obtained by the Inquirer on Monday night, Senate Sergeant-at-Arms Jose Balajadia Jr. said he had reviewed the CCTV videos and found no sign of the woman who, according to Mindoro Oriental Representative Reynaldo Umali’s account, showed up at the Senate on February 2 and handed him an envelope containing documents involving Chief Justice Renato Corona.

The documents, including supposed photocopies of Corona’s specimen signature cards concerning his dollar deposits at Philippine Savings Bank (PSBank), served as the basis for the subpoena issued by the impeachment court on February 6 for the records of the Chief Justice’s bank accounts.

Enrile has ordered the prosecution, of which Umali is a member, to “explain in 24 hours” why it was able to obtain copies of the cards that Corona purportedly signed when he first opened a dollar account with PSBank’s branch on Katipunan Avenue, Quezon City, in 2008.

An unfazed Umali said Tuesday in one media interview that he was standing by his story, and joked that the woman he had earlier described as a “small lady” could have been so “microscopic” as to evade detection by the Senate CCTV.

Umali also told reporters that he would not have risked losing his lawyer’s license “had I not believed these documents were accurate.”

He said he did not know the woman who gave him the envelope.

In a press briefing, Marikina Rep. Romero Quimbo, the prosecution’s spokesman, expressed confidence that the impeachment court would not set aside the evidence presented by his team regarding Corona’s bank accounts.

Quimbo said there was no need for the prosecution to produce the woman who gave Umali the documents.

Quimbo also said the prosecution had full trust in the impeachment court’s judgment on the admissibility of the bank documents.

“We know and we trust that the Senate will always make the appropriate judgment in terms of ruling on the evidence because what they have right now were actually presented by the witnesses, not the ones attached by the prosecution,” he said.

Last week, Umali described the woman as “definitely heaven-sent” to the prosecution in its struggle to present the truth on Corona’s supposed unexplained wealth.

“I don’t really know who she is,” he said then. “I can’t remember her face. She appeared to be very ordinary, definitely not that beautiful because otherwise I would have paid more attention to her.”

The lawmaker said the woman gave him the envelope “probably in the Senate premises” while he was on his way to his vehicle to attend a meeting with other prosecution members in a hotel on Roxas Boulevard.

Iloilo Rep. Niel Tupas Jr., the chief prosecutor, told the impeachment court that Umali turned over the envelope to the team during its regular meeting in the hotel.

Tupas said the prosecution attached the contents of the envelope to its request for subpoena because it believed in the documents’ accuracy.

Umali said the woman’s identity was “irrelevant” as long as she helped the prosecution in bringing out the truth about Corona’s local and foreign currency deposits.

Told that the documents were illegally acquired in violation of the Bank Secrecy Law, Umali said: “I don’t think [the principle of] the fruit of the poisonous tree applies here. After all, it’s the court that agreed to subpoena the bank documents.”

In a report to Enrile dated February 7, Balajadia said he reviewed the CCTV footage that recorded the movements on February 2 of “a person bearing the appearance of Congressman Reynaldo Umali” in the Senate from the time of arrival at 1:07 p.m. until the time of departure on 3:19 p.m.

Umali was seen entering the lobby at 1:07 p.m. and proceeding to take the stairs to the Padilla Room on the second floor, which houses the prosecution staff members and also serves as working area for the House press corps.

Shortly after, camera No. 11 captured Umali while having an interview with the media at 1:39:20 p.m.

The footage showed Umali talking with “a short female, although we did not monitor anything that appeared to be a transfer of documents or objects between the two individuals,” Balajadia said.

Media and Senate security personnel surrounded Umali while he was being interviewed in the hallway leading to the Senate press room.

The next footage captured by camera No. 10 showed Umali taking the elevator from the second floor to the fifth floor at 1:42 p.m.

Umali entered the Pendatun Room, which serves as the temporary office of the prosecution, but at 2:28 p.m. “he was seen standing outside near the Pendatun Room appearing to be talking to an individual who appears to be a short female,” Balajadia said.

Camera No. 14 footage showed Umali entering the Senate session hall at 2:26 p.m. when the impeachment trial had already started. He left at 3:15 p.m. using the exit stairs on the second floor.

No camera has been installed in this area, which makes it a blind spot. It took Umali only a minute to surface at the main lobby on the ground floor.

“Please note that we did not monitor anything that appeared to be a transfer of documents or objects from his interaction with an unidentified person in the fifth floor, not at the Session Hall, second floor hallway, and ground floor lobby up to the time he exited the Senate lobby and seemingly boarding a vehicle,” Balajadia said.

Under questioning by Senator Francis Escudero at the February 6 hearing, Umali said he could not recall the identity of the woman, or where exactly in the Senate he had met her.

But he recalled meeting her before leaving the Senate for the Department of Public Works and Highways’ main office in Port Area, Manila, where he followed up some of his pending projects before proceeding to Midas Hotel and Casino for the regular post-trial briefing with members of the prosecution.

He said that while in his car en route to the meeting, he looked at the documents that he later turned over to Tupas at the meeting.

But when she testified at the impeachment court on Monday, PSBank Katipunan branch manager Annabelle Tiongson said the specimen signature cards submitted by the prosecution to the Senate Clerk of Court were not genuine.

“[These] are fake documents,” Tiongson said. “These did not come from our bank. [These] are not replicas of genuine documents.”

Enrile, Escudero and Sen. Jinggoy Estrada took turns in questioning Tiongson on the authenticity of the signature cards.

According to Tiongson, signature cards are kept in a cabinet in a vault at the bank.

She said two bank officers held the key for the “safekeeping” of the cards, but that she could access the documents as well.

Enrile’s said: “Not one of them can open the filing cabinet without the other?”

Asked by Sen. Jinggoy Estrada whether the custodians of the signature cards were “small ladies,” Tiongson said they were “shorter than I am” but that the height of a person was “relative” to the observer.