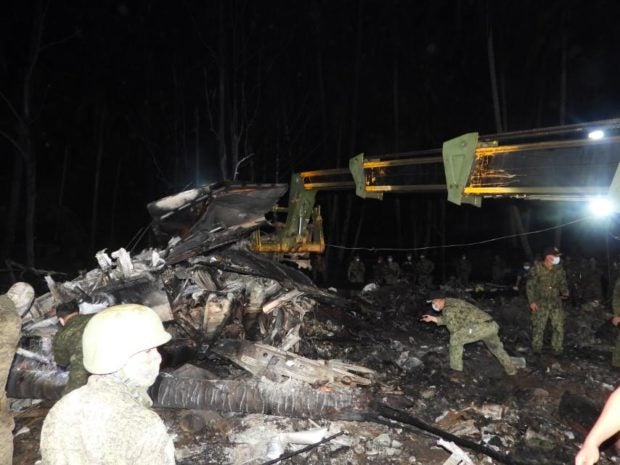 Deaths from the ill-fated C-130 plane crash in Sulu have reached 53 on Tuesday, July 6. AFP

MANILA, Philippines — Presidential son and Deputy Speaker Paolo Duterte, and ACT-CIS Partylist Rep. Eric Yap will turn over a donation amounting to P5 million to the families of the victims of the C-130 crash in Sulu, which included members of the military.

The lawmakers said Wednesday the donation — part of which came from the business sector of Davao City and Benguet — will be turned over in Camp Aguinaldo on Monday and will be received by ranking officials of the Armed Forces of the Philippines (AFP).

The assistance will then be distributed among the families of the deceased and injured troops and civilians, they added.

On Tuesday night, the total death toll has climbed to 53, with the death of the 50th military personnel who was among those aboard the Philippine Air Force’s C-130 Hercules cargo plane, after succumbing to serious chemical burns in the face.

“To us, they are heroes and we salute them for their sacrifices. But to their families, they are everything. From the people of Davao City, we would like to extend our condolences to the bereaved families and loved ones of those who died in the incident,” Duterte said in a statement.

“We honor the lives of our State defenders that we lost in this tragedy. No amount of money can compensate the sacrifice they have done but I hope that this can somehow help them for their immediate needs,” he added.

Duterte called on the national government to provide the necessary support needed by the victims’ families and to ensure that no similar incident will occur in the future.

Yap, meanwhile, said that the donation is only a small amount compared to the sacrifices and services of the soldiers.

(It is sad to think of what happened to our soldiers who just wanted to serve our country and join the fight against terrorism. We salute them.)

(We want to help their families now that they lost a loved one. For our injured countrymen, we hope that this can serve as a temporary assistance until they can get back to service.)