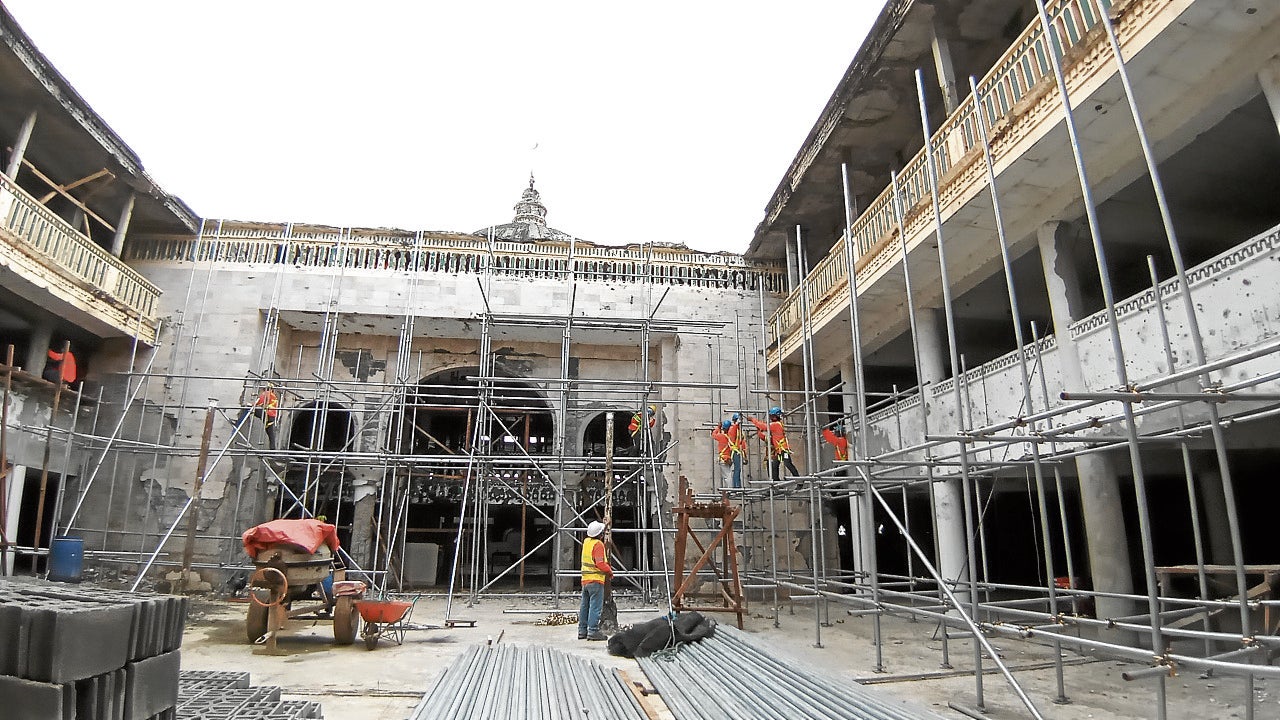 FULL BLAST The reconstruction of Dansalan Bato AliMosque in Marawi City has been in full blast since late last year. The religious site was heavily damaged during the 2017 siege. —DIVINA M. SUSON

KORONADAL CITY – Residents of Marawi, who were displaced in the 2017 siege by Islamic State (IS)-linked militants, called on Senator Manny Pacquiao to scrutinize the ongoing rehabilitation of the war-torn city, which allegedly stinks of corruption.

Drieza Lininding, chair of the Marawi-based Moro Consensus Group, said Monday that Pacquiao could uncover cans of worms in how public funds were spent for projects aimed at supposedly restoring the country’s lone Islamic city to its old glory.

“Senator Manny, take a look at the Marawi rehabilitation and you will discover many anomalies, the reason why four years after the siege, residents have yet to return to their homes,” Lininding said in a statement.

The Task Force Bangon Marawi (TFBM), which is composed of various government agencies, has been assigned to coordinate the rehabilitation of the city after a fierce five-month battle between government forces and IS militants starting May 23, 2017.

The war displaced at least 350,000 civilians and destroyed the city’s main commercial district.

Lininding said Pacquiao could uncover many irregularities “if he will investigate each agency” under the TFBM headed by Housing Secretary Eduardo del Rosario.

For instance, a government agency whose mandate is housing is implementing a road project, said Lininding, apparently referring to the National Housing Authority.

Lininding alleged that a single contractor, which he did not identify, had been favored with implementing several projects costing millions of pesos.

“These are just the tip of the iceberg. You will discover many more anomalies in Marawi. Even if you wake up late to the truth, we believe that you can be a big help to fight corruption,” Lininding told Pacquiao.

The boxing icon and lawmaker recently claimed that corruption had worsened under the current administration, earning him the ire of President Duterte, who challenged him to name the agencies allegedly ridden with corruption.

Pacquiao has identified the alleged “corrupt agencies” as the Departments of Health, Social Welfare and Development, Energy, and the Environment and Natural Resources.

Pacquaio flew to the United States to train for his August fight against welterweight champion Errol Spence in Las Vegas.

Read Next
Ancient bone carving could change the way we think about Neanderthals
EDITORS' PICK
Smart powers Liga Adarna Season 4: Race to the Top
Duterte orders review of conduct of war on drugs
Miss Universe Philippines partners with JC
No evidence to warrant filing of homicide case vs Julian Ongpin – police
Rabiya Mateo admits dating an older man and jokes: ‘Tatay pala ‘yung hinahanap’
Who is Julian Ongpin?
MOST READ
LOOK: Angel Locsin inspires with weight loss progress
Gordon: Senate uncovered ‘mother of all corruption’ under Duterte admin
Gordon dares Duterte to prove he pocketed PDAF given to Red Cross
Who is Julian Ongpin?
Don't miss out on the latest news and information.