Cambodia PM weighs in to get pet lion returned to owner 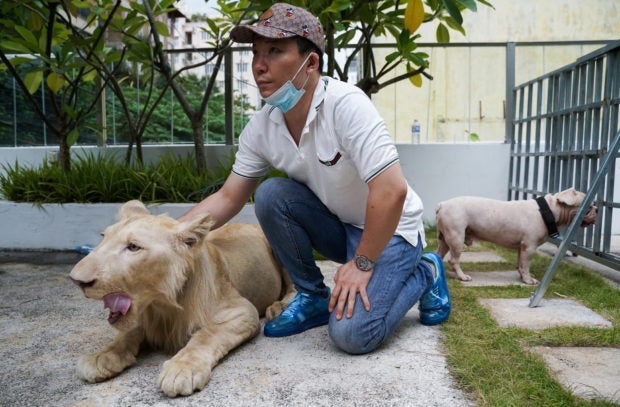 A confiscated pet lion poses with its owner, surnamed Guo, as it arrived back home from the Phnom Tamao Wildlife Rescue Center after Prime Minister Hun Sen ordered authorities to return the animal in Phnom Penh, Cambodia, July 5, 2021. REUTERS

PHNOM PENH — A pet lion that authorities seized from a house in Cambodia’s capital last week was reunited with its owner on Monday – after a personal intervention by Prime Minister Hun Sen.

Police and wildlife officials initially raided the property on June 27, saying they were rescuing the animal after videos of it appeared on the social media app TikTok, and neighbors raised the alarm.

In the days that followed, social media posts appeared saying the lion should be returned to the owner, who had denied accusations of mistreating the animal.

In a Facebook post on Sunday, the prime minister ordered the 18-month-old male lion be returned on the condition the owner make a proper cage.

Authorities had said it was illegal to keep lions as pets. But Hun Sen said it was a special case because the owner had fed the lion from a young age and treated him like a family member.

Last week, television viewers watched as the officials arrived, sedated the big cat and carried it away in a metal crate.

On Monday they watched again as the lion wandered slowly back into the property, accompanied by the owner’s pet dog.

“At first I was sad, then excited and touched,” the owner, who identified himself by his surname Guo, told Reuters.

The Wildlife Alliance NGO that helped in the initial removal said it had no immediate comment on Monday. But Britain’s ambassador to Cambodia, Tina Redshaw, said she disagreed with the return.

“Disappointed that lion confiscated from city centre residence is being returned, undermining Flag of Cambodia legislation preventing ownership/trade in endangered wildlife, harming global efforts to tackle Illegal Wildlife Trade, to say nothing of stress & suffering of inappropriate captivity,” Redshaw said in a tweet.