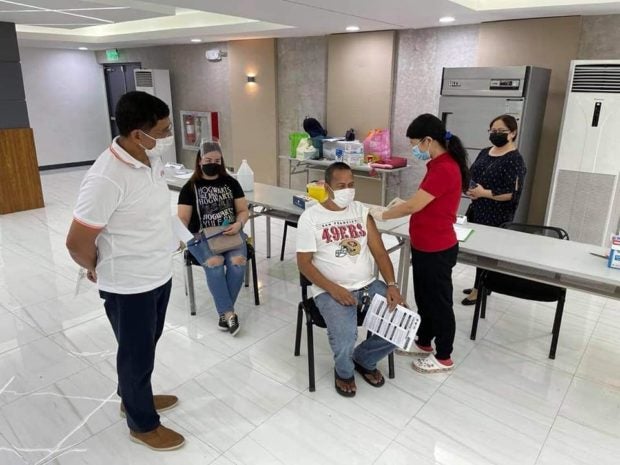 Vaccination of the A4 priority group at the Clark Freeport Zone. Image from Facebook / Clark Development Corporation

MANILA, Philippines — The country has administered one million COVID-19 vaccine doses in just four days, bringing the total number of administered shots to over 12 million doses, the deputy chief implementer of the National Task Force (NTF) against COVID-19 said Tuesday.

Secretary Vince Dizon said this during his speech at the ceremonial vaccination of A4 workers in Region 3 held at the Clark Development Corporation Satellite Vaccination Site in Clark Freeport Zone, Pampanga. He however, did not provide a breakdown on the number of first and second doses for the administered jabs.

(We are here to announce to you that we again reached one million vaccinations in another four days. The number of total administered doses is now 12 million.)

Dizon said the improving number on COVID-19 vaccination is a “testament” of the hard work of local officials and health workers in the vaccination drive.

“It’s a testament to all mayors throughout the country who have worked so hard to ramp up our vaccination. Dumating lang po ang supply, kaya natin ma-achieve ang ating goal for this year,” he noted.

(We will be able to achieve our goal for this year if the supply of vaccines arrives.)

On Monday, the Department of Health said the country has administered over 11 million vaccine doses as of July 4. The health agency’s data indicated that at least 8.8 million individuals have received their first doses of the coronavirus shot while over 2.8 million have been fully vaccinated.

The government aims to vaccinate 70 percent of the country’s population—or around 70 million individuals —to reach herd immunity. Vaccine czar Secretary Carlito Galvez Jr. earlier said the country may reach this goal by November so that Filipinos can enjoy a “better Christmas.”