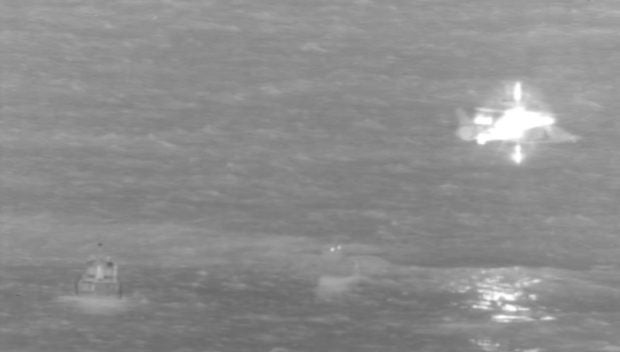 The U.S. Coast Guard and Honolulu Fire Department respond to an emergency nighttime landing of a Boeing 737-200 cargo plane in the Pacific Ocean off the coast of Honolulu, Hawaii, July 2, 2021. Courtesy U.S. Coast Guard

NEW YORK — The U.S. National Transportation Safety Board said it would scan the ocean floor on Monday to locate a Boeing 737-200 cargo plane that sank off Hawaii last week after the two-member crew made an emergency water landing.

Investigators plan to use sonar technology to search for the decades-old plane and recover cockpit voice and flight data recorders, the NTSB said in a statement.

“That information will be used to determine how and when the recorders could be recovered and then how and if the airplane will be salvaged,” the agency said.

The agency has recovered and examined a small amount of floating debris from the flight, it said.

A Boeing spokesperson said the company’s technical team was helping the NTSB investigation.

The two crew members on Transair Flight 810 were injured after being forced to land in the Pacific Ocean early on Friday, the NTSB said. The agency did not disclose the extent of their injuries.

The crew reported engine trouble and plans to turn back shortly after taking off at 1:33 a.m. local time from Daniel K. Inouye International Airport in Honolulu. The plane was en route to the Hawaiian island of Maui.

A U.S. Coast Guard helicopter, responding to reports of the downed plane, spotted a debris field and found one crew member clinging to the plane’s tail roughly an hour after takeoff. Another survivor was found using packages as a flotation device.

One crew member was taken to a hospital by helicopter and the other was rescued by boat.

The NTSB said it is scheduling interviews with the flight’s crew, as well as air traffic controllers and maintenance workers.