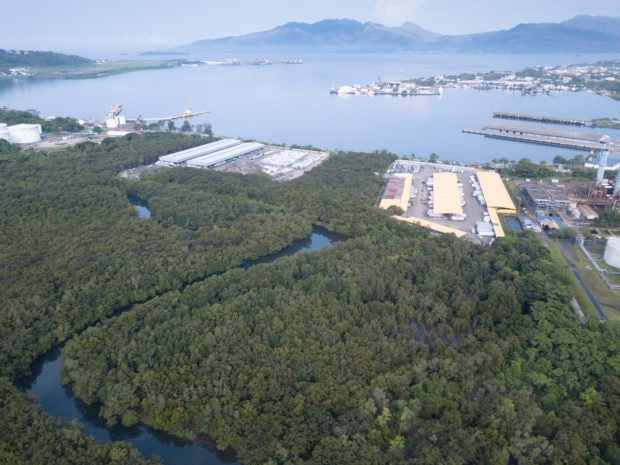 COASTAL FOREST The mangrove forests inside Subic Bay Freeport span some 62 hectares that are scattered in six different places. The China-funded Subic-Clark Railway Project of the government was initially reported to affect at least 7 ha of these mangroves in the Binictican-Malawaan area to give way to a logistics terminal. —PHOTO COURTESY OF SAVE SUBIC BAY MANGROVES COALITION

Save Subic Bay Mangroves Coalition (SSBMC) anticipated a new design, as it thanked Transportation Secretary Arthur Tugade for ordering the builder of the 71-kilometer freight railway to build the logistic terminal of SCRP away from 42 hectares of mangroves in SBF.

“We [hope] this would be the case when proponents present to free port stakeholders a revised plan in the next public hearings,” Jen Velarmino-Van der Heijde, SSBMC spokesperson, said in a statement on Sunday.

On social media, Chinese Ambassador Huang Xilian called SCRP a flagship project in the “Build, Build, Build” infrastructure program of the Duterte administration, adding that the $940-million (P46 billion) loan was the “highest funded government-to-government project between the two countries.”

Van der Heijde said SSBMC was in favor of progress and improved travel and communication in the country.

But “this same development can be achieved without demolishing our forests, our mangroves and wetlands,” she said.

Van der Heijde said they studied the data on the project and found the railway system could still be completed with “mere realignment” of its pathway, adding there was still time to do so since China Harbour Engineering Co. was still working on its detailed designs.

“Those who understand this are firm in their conviction that the railway path be rerouted to save our country’s heritage and its healthy development,” she said, referring to the 30-ha Binictican-Malawaan patch and 12-ha Boton area that would be at risk under the present project path.

The two patches are part of the 62 ha of mangroves protected by Presidential Proclamation No. 926 signed by the late President Corazon Aquino. The mangroves were believed to have survived Subic Bay’s military history as a naval fort by the Spanish, American and Japanese colonial government. The United States transformed it into a shipyard and supply depot for the Korean, Vietnam and Iran wars.

The Department of Transportation (DOTr) and the Bases Conversion and Development Authority (BCDA), which are proponents of SCRP, are scheduled to hold a fourth public hearing in SBF this July.

Timothy John Batan, DOTr undersecretary for railways, has said on July 2 that he was instructed by Tugade to ensure that all of the necessary environmental requirements and safeguards would be observed during the project construction.

Wilma Eisma, chair and administrator of the Subic Bay Metropolitan Authority (SBMA), said on Saturday that she had instructed their engineering department to coordinate with project proponents and consult with them on how possible realignments could minimize environmental damage.

Eisma said the SBMA had “always put a premium on its healthy environment,” making the free port an “attractive” investment destination and tourist attraction.