PAF inventory: No F-16s but assets show bid to build up capacity 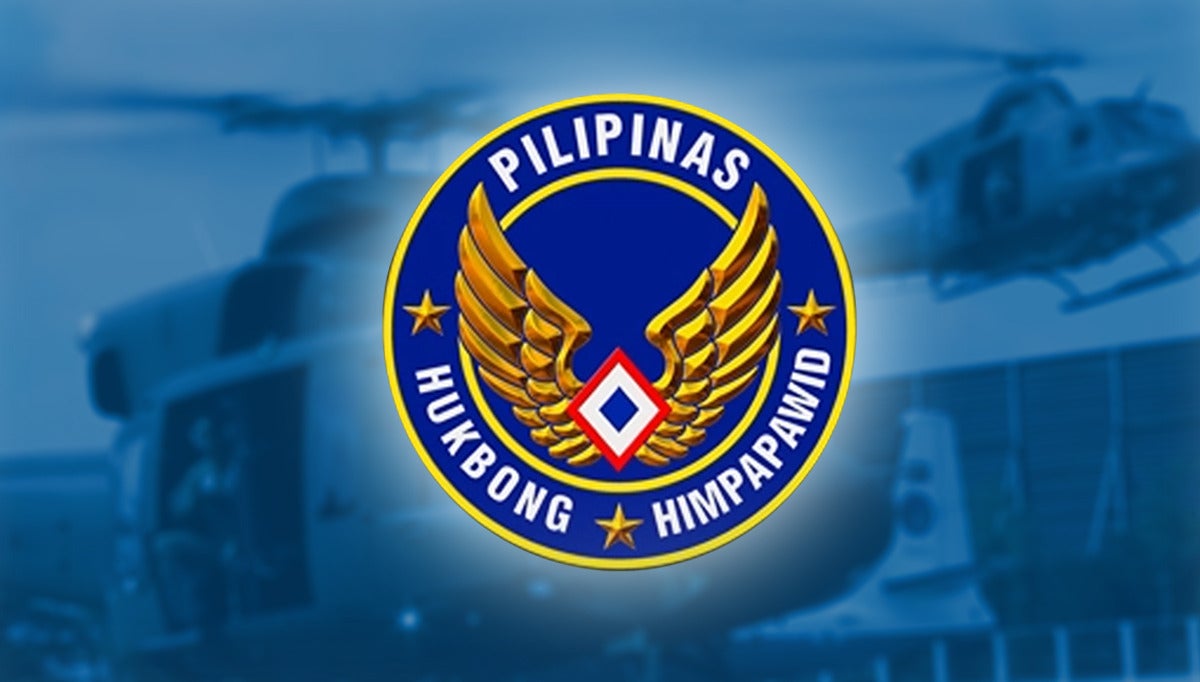 But with the July 4 accident involving a C-130 plane that crashed in Patikul, Sulu and killed 47 troopers and 3 civilians, the country’s air force bid farewell to one of its air assets.

The PAF, though, still has several aircraft in its inventory. Here are some of them:

The FA-50PH, a fighter variant of Korean Aerospace Industries (KAI), was first delivered at Clark Air Base, Pampanga province in 2015. The plane was acquired through the modernization program of the AFP. The PAF said that the FA-50PH is capable of “carrying short range air-to-air missiles, air-to-surface missiles with countermeasures such as chaffs and infrared flares.”

Signed in February 2014, the Philippine contract with KAI for 12 FA-50PH units is worth P18.9 billion. In 2020, the AFP allocated P126.18 million for the acquisition of parts needed for the fighter aircraft’s maintenance.

The Italian AW109E, one of the first attack choppers acquired by PAF, is armed with a 50 caliber machine gun and 2.75 inch rockets. The aircraft was part of the AFP’s modernization program under the Aquino administration.

Its arrival marked the first delivery of units under the P1.3 billion contract signed by the Department of National Defense (DND) and AgustaWestland in 2013.

The C-295M was acquired by the DND from Spain’s Airbus Defense and Space as part of the Command and Control Fixed-Wing Turboprop Acquisition Project through the revised modernization program of the AFP.

The aircraft will “boost the capabilities of medium tactical airlift requirement of transporting troops and equipment and support humanitarian and disaster relief missions.

The B-412EP, is part of the fleet of combat utility helicopters that is operated by the PAF’s Tactical Helicopter Wing. This aircraft that is considered as a partly militarized civilian helicopter was not initially procured because of the bidding process, but the PAF insisted in acquiring the aircraft that will be configured for combat utility roles. The B-412EP (VVIP) units are under the Presidential Airlift Wing. 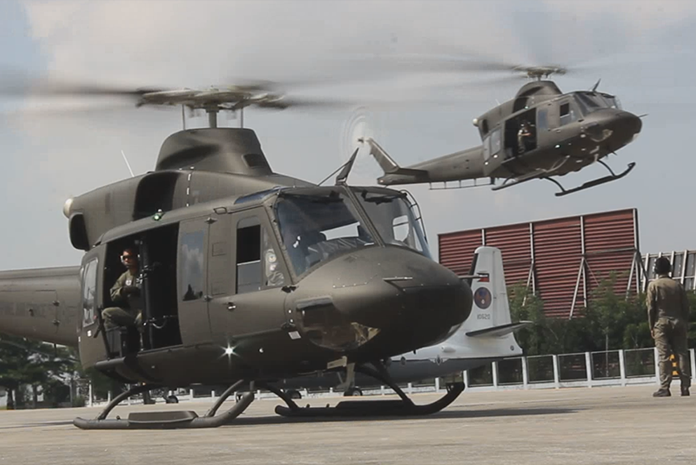 A B-412EP BEING USED BY THE PHILIPPINE AIR FORCE. PHOTO FROM PAF WEBSITE 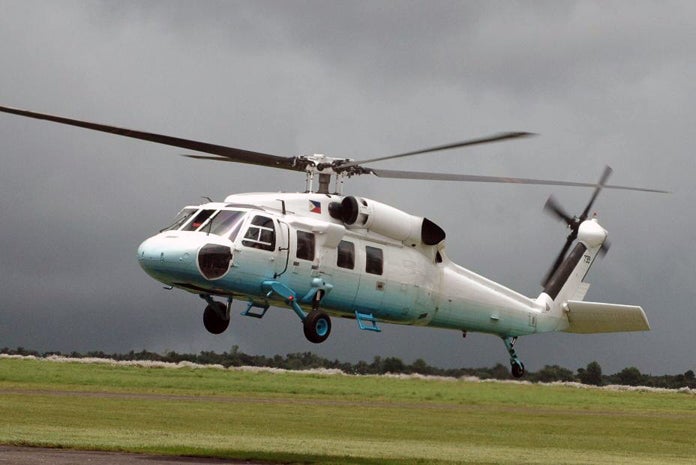 The PAF procured 16 Black Hawk helicopters and the first five landed at the Clark Air Base in Pampanga in November 2020. The aircraft was acquired by the Philippines from Polskie Zaklady Lotnicze (PZL) for P11 billion.

The helicopters that were acquired through the Combat Utility Helicopter Acquisition Project are used by PAF for several operations, including combat and rescue missions.

The B-205A-1 is one of the country’s combat utility helicopters that are used by PAF’s Tactical Helicopter Wing. The aircraft served as one of the helicopters used by former PAF chief Edgar Fallorina as a flight commander, instructor pilot, and test pilot. 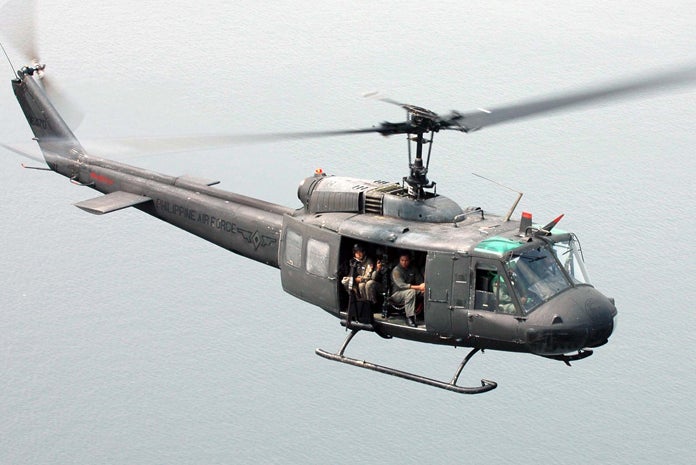 THE VIETNAM ERA HUEY HELICOPTER STILL USED FOR TRANSPORT BY THE PAF. PHOTO FROM PAF WEBSITE

The UH-1H, or Huey, helicopter is used for the transport of soldiers and cargo, disaster and relief operations, and combat missions. The PAF is known to operate 30 to 40 types of Hueys. In 2019, the AFP allocated P35 million to acquire an engine assembly needed for the maintenance of two of helicopters.

The W-3A “Sokol” is a medium-size aircraft primarily designed to deliver combat support for soldiers. It first arrived at the Clark Air Base in Pampanga which followed a P2.8 billion contract between the country and the Polish government that was secured by PZL in 2010 to supply eight helicopters.

The T-41 is an aircraft given by South Korea to the PAF’s maintenance wing. A total of 15 units arrived at the Clark Air Base in Pampanga in 2008.

The SIKORSKY S-76A is a search and rescue utility helicopter that requires a crew of two. Capable of carrying 13 passengers, the helicopter is powered with two Turbomeca Arriel 2S2 turboshaft, 922 horsepower each, and has a maximum speed of 155 knots.

In 2018, the PAF allocated P9.5 million to acquire parts and services needed for the maintenance of one of its units. In 2020, the PAF said that all remaining units are grounded for “prompt maintenance inspection” after an accident in Basilan province that claimed four lives in September 2020. 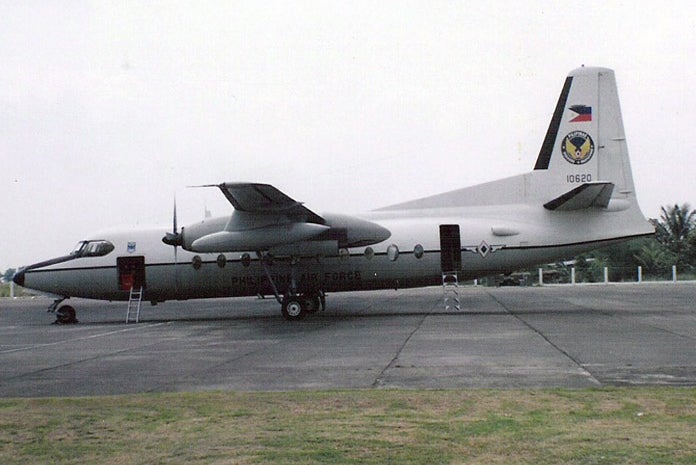 ONE OF TWO FOKKER PLANES ASSIGNED TO THE 250TH PRESIDENTIAL AIRLIFT WING. PHOTO FROM PAF WEBSITE

The FOKKER F-28 “Fellowship” and FOKKER F-27 “Friendship” are part of the several aircraft assigned to the 250th Presidential Airlift Wing that provides air transport for the President, the first family, and for visiting heads of states and other local and foreign VIPs. 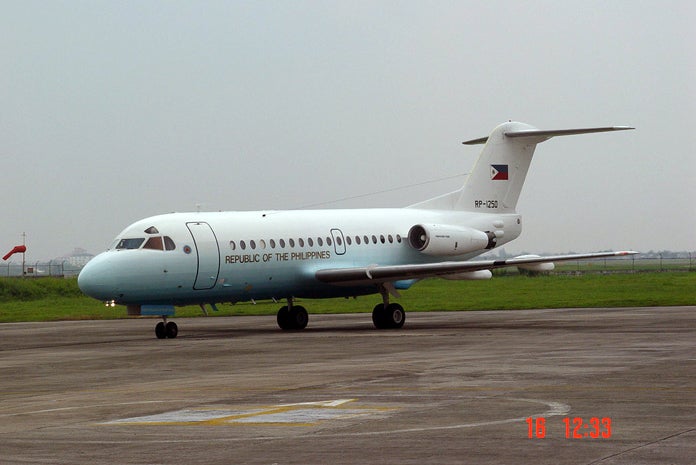 ONE OF TWO FOKKER PLANES ASSIGNED TO THE 250TH PRESIDENTIAL AIR WING. PHOTO FROM PAF WEBSITE

The MD-520MG is a light-armed helicopter that has been with PAF since the early 1990s when the country acquired units from the government of the United States (US) through a Foreign Military Sales deal. The aircraft is small and easy to maintain and operate. In 2016, there were plans to replace the MD-520MG fleet.

The country has several C-130 aircraft, but last February, Chargé d’Affaires John Law and representatives from the US Embassy in the Philippines’ Joint US Military Assistance Group turned over the first of two units to be delivered through the Foreign Military Financing grant program “to strengthen the Philippine military’s logistical capacity for military and civil support operations, including humanitarian assistance and disaster relief and distribution of COVID-19 supplies.”

The OV-10 “Bronco” aircraft was received by the Philippines from the United States government. These are retired turboprop light attack aircraft from the US Air Force. The country is said to be the last operator of the OV-10 “Bronco”, with the PAF presently operating at least 8 to 10 units.

The N-22 “Nomad” was one of the transport aircraft used by the PAF for its transport missions following the suspension of operations of the country’s remaining Lockhee C-130 Hercules aircraft.

The AS-211 is a fleet of PAF aircraft that serves the country’s air defense missions. It filled the role of the retired fleet of S-211 jet trainers that first arrived in the Philippines in the late 1980s to 1990s.

The SF-260 “Marchetti” is a light aircraft which has been operated as a military training or aerobatics aircraft. Its military versions can also arm it with “close-support” roles. In 2018, the PAF said it was looking for suppliers capable of providing spare parts needed for the maintenance of the engine systems of the said aircraft.