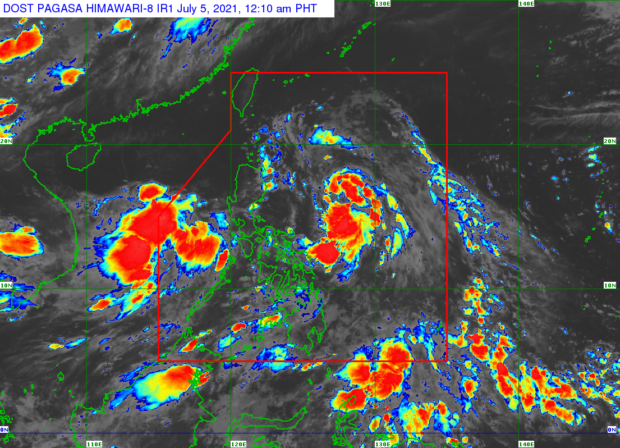 MANILA, Philippines — Tropical depression Emong may make landfall in the vicinity of the Batanes-Babuyan Islands by Monday afternoon or evening, the Philippine Atmospheric, Geophysical and Astronomical Services Administration (Pagasa) said.

According to Pagasa’s 8 a.m. bulletin, the tropical depression is forecast to continue moving generally northwestward until Monday night as it approaches the extreme Northern Luzon-Taiwan area.

“On the forecast track, the center of the tropical depression will pass close or make landfall in the vicinity of the Batanes-Babuyan Islands area this afternoon or tonight,” Pagasa said.

“However, due to the fast movement of the tropical depression, there is an increasing chance that the close approach or landfall will happen at a much earlier time,” it added.

The center of “Emong” was last located 385 kilometers east-northeast of Tuguegarao City, Cagayan or 385 km east of Aparri, Cagayan.

The weather disturbance is moving west northwest at 40 kilometers per hour (kph) and has maximum sustained winds of 55 kph near the center and gustiness of up to 70 kph.

Tropical Cyclone Wind Signal No. 1 is still up over Batanes and the northeastern portion of Cagayan (Santa Ana, Gonzaga) including Babuyan Islands, according to Pagasa.

“Emong” is forecast to bring moderate to heavy with at times intense rains over Batanes and Babuyan Islands from Monday until Tuesday morning.

It is expected to exit the Philippine area of responsibility on Tuesday morning.