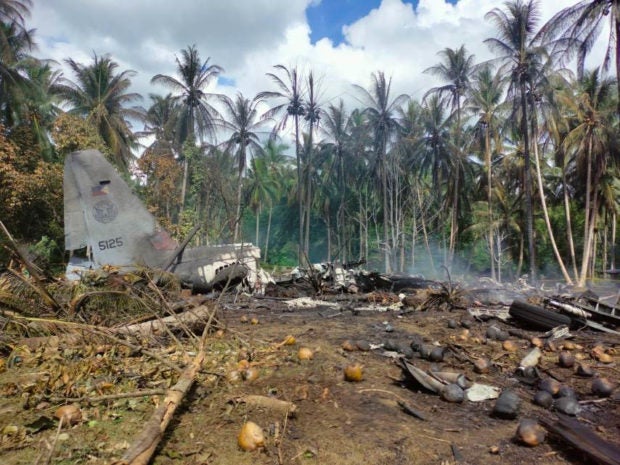 WRECKAGE The Lockheed C-130 Hercules plane, one of two newly acquired transport aircraft that arrived in January, was seen hovering and circling above Sitio Amman in Patikul, Sulu, before it plunged near a garbage area, witnesses said. —PHOTO COURTESY OF ARMY 11TH INFANTRY DIVISION

A military cargo plane carrying soldiers crashed in Patikul, Sulu province, on Sunday morning, killing 42 military personnel on board and three civilians on the ground.

Forty-nine military personnel on board the C-130 Hercules plane and four civilians on the ground were wounded and rescued. Five other passengers remained missing, military officials said.

All 96 onboard were military personnel, officials said.

The transport plane was bound for Jolo, Sulu’s capital, from Lumbia Airport (also known as Cagayan de Oro Airport), according to the Philippine Air Force (PAF).

It went down for still unknown reasons at 11:30 a.m. in Sitio Amman in Patikul’s Barangay Bangkal.

“It’s a very unfortunate incident, the saddest day for us,” the Armed Forces of the Philippines chief of staff, Gen. Cirilito Sobejana, told reporters on Sunday. It was “transporting our troops from Cagayan de Oro,” he said.

With black smoke trailing, the plane was seen hovering and circling above Sitio Amman before it plunged near a garbage area that villagers called “taas landing,” or higher ground.

“We ran for safety,” Abdel Taradji, a store owner, said in Tausug. “We thought it would fall on us. Fortunately, it fell quite far from our place.”

Another resident, a mobile phone load vendor, said neighbors told him that two houses were hit and that some children were injured.

Videos circulating on social media showed thick billows of dark smoke rising from among the trees in the village and people and soldiers rushing to the burning wreckage.

The Lockheed C-130 Hercules was one of two newly acquired transport aircraft that arrived in the country on Jan. 29, procured by the PAF for P2.5 billion with funding aid from the US government.

It was the second Air Force asset to crash in two weeks. On June 23, a Sikorsky S-70i Black Hawk helicopter went down on a routine night flight in Tarlac province, killing all six Air Force personnel on board.

Lt. Col. Maynard Mariano, PAF public affairs officer, said the C-130 plane departed from Villamor Air Base in Metro Manila on Sunday morning for Cagayan de Oro to transport personnel. At past 9 a.m., it took off from Lumbia Airport and landed in Laguindingan Airport before flying to Jolo.

“The plane was about to land when it crashed,” Mariano said. A military source from the 11th Infantry Division said the crash site “is on the tip of [the] landing strip of Jolo airport, bordering Patikul” and about 700 meters away from their camp. 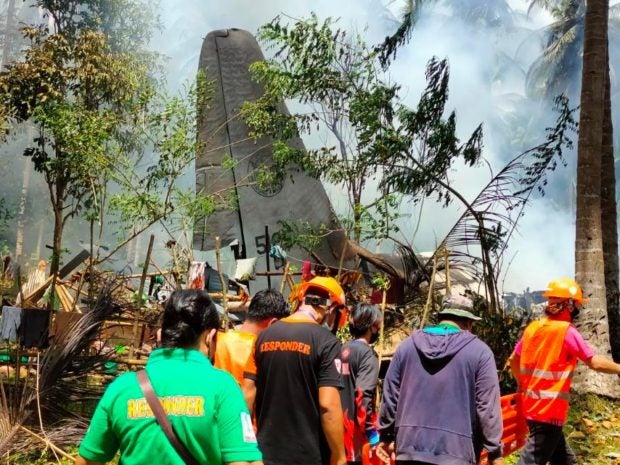 As of 5:30 p.m. on Sunday, the Joint Task Force Sulu said at least 29 bodies had been recovered from the wreckage and at least 49 people were rescued and treated for injuries at the 11th Infantry Division hospital in Barangay Busbus, Jolo.

A military source at the Westmincom said at least 43 soldiers were rescued and treated for injuries at Kuta Teodulfo Bautista trauma hospital in Busbus.

The source confirmed that four civilians were injured onsite and were currently undergoing medical treatment, while seven soldiers were airlifted to Zamboanga City due to trauma and burns.

“We are doing our best effort to put out the fire and rescue the passengers safely,” Sobejana said. Patikul Mayor Kabir Hayudini said he had received reports that many survivors were rescued. “I just don’t have any idea if there are civilians affected, I have yet to get updates from my people on the ground.”

A majority of the passengers were soldiers who had just completed their training at Camp Osito Bahian in Malaybalay City, Bukidnon province, under the 4th Infantry Division.

Brig. Gen. Ferdinand Barandon, commander of the 403rd Brigade, said the soldiers were on their way to reinforce the manpower of the 11th Infantry Division. Most of them were from Midsalip, Zamboanga del Sur province.

A military source, who refused to be named for lack of authority, told the Inquirer that they were mostly noncommissioned officers and privates bound for deployment from Joint Task Force Diamond to the 11th Infantry Division.

“This could be a special mission to bring troops to augment units in Jolo. If I remember it right, this will be the third C-130 incident that crashed in the history of the Armed Forces of the Philippines. The first one was in [the] 1990s, the second one was in 2008 in Davao City,” a retired Army general, who also requested anonymity, told the Inquirer.

On June 23, a Sikorsky S-70i Black Hawk helicopter crashed, killing all six PAF personnel on board, near Col. Ernesto Ravina Airbase, or Crow Valley Gunnery Range, in Capas, Tarlac province. The aircraft was part of the first batch of five helicopters delivered in November last year for the PAF.

A second batch of six arrived early last month with the last batch of five expected to be in the country this November.

Sixteen Sikorsky S70-i helicopters were acquired for a contract price of $241.5 million by the Department of National Defense from Polish company Polskie Zaklady Lotnicze Sp.z.o.o, under license from Sikorsky United States, through a government-to-government transaction with Poland.

—WITH REPORTS FROM JEOFFREY MAITEM, RICHEL UMEL AND INQUIRER RESEARCH