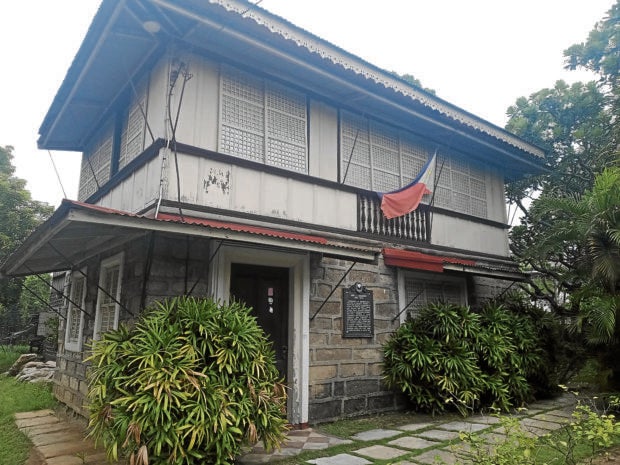 HISTORIC ABODE The late former President Benigno Aquino III, as a child, spent his vacations in the house of his grandfather, Don Jose Cojuangco, in the City of Malolos in Bulacan. The house is nowunder the care of the National Historical Commission of the Philippines —CARMELA REYES-ESTROPE

CITY OF MALOLOS, Bulacan, Philippines — The period for national mourning over the death of former President Benigno “Noynoy” Aquino III ended on Saturday without any yellow ribbon tied around the ancestral house of his maternal grandfather Don Jose Cojuangco in this capital city of Bulacan province.

The Cojuangco house near the historic Barasoain Church along Paseo del Congreso here was a vacation home for Noynoy as a child.

According to Corpuz, the Estrella, Tanjutco, and Tantoco families of Malolos are the Cojuangcos’ cousins.

Now under the care of the National Historical Commission of the Philippines, the unadorned Cojuangco house surprised residents who were aware of its connections with the late president, said Anna Marie Gonzales Felizardo, a Bulacan State University professor and executive director of heritage group Kabesera.

“Based on standard procedure, it is the government agency or agencies concerned that should have put up a tarpaulin expressing sympathy, love and support for the Aquino family,” Felizardo told the Inquirer on June 29.

Gov. Daniel Fernando on Saturday said the lack of adornment to indicate mourning at the Cojuangco house should not be interpreted as Bulacan’s lack of grief.

“We are very honored, humbled and thankful for [Noynoy Aquino’s] love for all Filipinos, and for us — his fellow Bulakenyos,” the governor said.

Don Jose was born and raised in the Malolos house before he became a lawyer and relocated to Tarlac province to invest in agriculture. He became a municipal councilor of Paniqui town in Tarlac from 1922 to 1925 and a congressman from 1934 to 1947.

The Cojuangco patriarch was also the founder and president of Philippine Bank of Commerce before settling down to manage the family’s Hacienda Luisita in Tarlac from 1959 to 1976.

Fernando said he would like to believe Noynoy leaned on this Bulacan lineage.

He said Bulacan was grateful when Noynoy approved the P5.7-billion rehabilitation of Angat Dam to address fears that it would not survive the so-called “Big One,” a reference to a 7.2-magnitude earthquake that could rock Metro Manila as projected in quake models by the Philippine Institute of Volcanology and Seismology.

The governor also remembered Noynoy for leading the Independence Day celebration at Barasoain Church during his term.

The end of mourning for Noynoy on July 3 coincided with the birth anniversary of his grandfather, who was born in this Bulacan capital city in 1896. Don Jose died in Tarlac on Aug. 21, 1976.

(On the same date seven years later, his son-in-law and Noynoy’s father, former Sen. Benigno “Ninoy” Aquino Jr., was killed at the then Manila International Airport’s tarmac on Aug. 21, 1983. Ninoy’s death sparked the peaceful revolution that led to the ouster of strongman Ferdinand Marcos and swept into power his wife, Cory, to become the country’s 11th president. Noynoy was elected 15th president in 2010, on the heels of Cory’s death on Aug. 1, 2009.)

In Tarlac City, grieving was subdued during the last days of Noynoy’s wake.