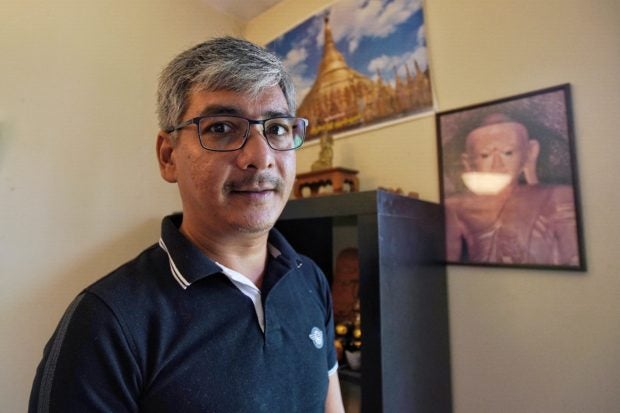 Journalist and US citizen Nathan Maung poses for a pictures during an interview with AFP in Fairfax, Virginia on July 2, 2021. AFP

FAIRFAX, United States — Journalist Nathan Maung turned to meditation when he was jailed for reporting on Myanmar’s bloody coup, but even back home in sleepy Virginia, he can’t forget those left behind, including a colleague still at the mercy of their jailers.

In March, as the junta moved to crush mass pro-democracy protests on Myanmar’s streets, about 45 soldiers arrived at Maung’s office in the commercial capital Yangon, he told AFP in an interview.

As the squad battered their way through the gate and a locked door, Maung was frantically sending messages to friends telling them he was about to be arrested, he said.

When the soldiers finally broke through and stormed in with their guns up, “I said, ‘Please, don’t shoot us’.”

Myanmar has been rocked by a huge uprising since the February putsch that ousted Aung San Suu Kyi and her government.

The junta has responded with force — shooting protesters, arresting suspected dissidents, rounding up journalists and shutting down news outlets.

Maung and his colleague Hanthar Nyein watched the squad take “everything from our office” — cash, jewelry, and even shoes — before they were brought to an interrogation center in northern Yangon.

There, he said, he was held “for four days” — during three of which he was denied food, and for two, water.

“I kept practicing Vipassana meditation to be mindful,” said Maung, who is a Myanmar-born US citizen.

And with the first sip of water came hope.

“After I drank my first water, I thought I could live,” he said. “I wouldn’t be killed.”

More than 880 people have been killed and almost 6,500 arrested in the crackdown according to a local monitoring group, although the State Administration Council — as the junta calls itself — disputes these figures.

Another group, Reporting ASEAN, says 89 journalists have been detained since the coup.

In March, one journalist livestreamed his own arrest on his employer’s official Facebook page, with the chaotic footage showing loud bangs outside his apartment building.

Kamayut Media, which Maung founded, faced similar charges under a colonial-era law that criminalizes encouraging dissent against the military.

As well as brute force, the military has re-tooled a colonial-era law to make spreading “fake news” a crime as it tightens its grip on dissent.

Maung soon found out how brutal the consequences of being brought in could be.

“They hit my eardrums with their bare hands several times, they beat my face and shoulders,” he said.

His phone had been broken by the time he got to the center, and was of no use to his interrogators looking for contacts of dissidents and other journalists.

But Hanthar Nyein’s was still working, and they needed his password.

“They put his legs on the ice block for hours, burnt his skin with a cigarette,” Maung said.

He refused to tell them until they threatened to rape him, Maung said, and when they found pictures of him with Suu Kyi and other political figures, he was beaten again.

The junta’s information team says all investigations and interrogations are being carried out according to the law.

‘I left him behind’

Maung believes US diplomacy was one of the factors in all charges against him being dropped, and his release in June.

It is a freedom not yet afforded to fellow US citizen and journalist Danny Fenster, who has been held since May 24, the only foreign reporter remaining in junta custody.

In Fredericksburg, Virginia, Maung said he is committed to continuing his work and a “free Burma” — using a previous name for Myanmar — and to work to free other imprisoned journalists, such as his colleague Hanthar.

Until then, he has demons to live with.

“I contacted our lawyers when I arrived in the States, and I was told that he was crying in the court when I left him behind,” he said.

“It broke my heart… I do not enjoy my freedom at all.”